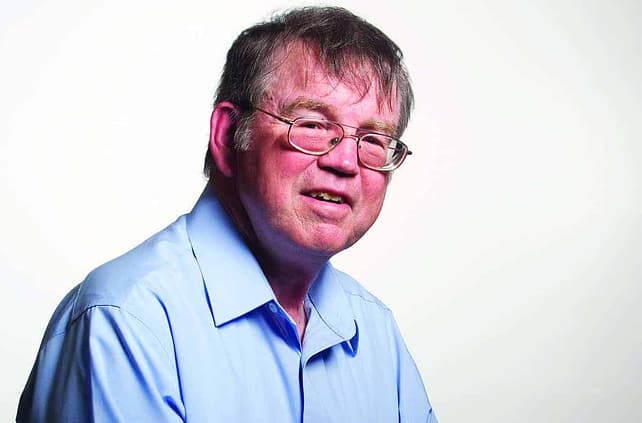 Rep. Timothy Hallinan's proposal would stop putting some mineral tax revenue into savings at a time when the state faces a financial crisis. But it would also perpetuate Wyoming's dependence on mining industries.

Advocates of forcing Wyoming to suckle even more forcefully at coal’s teat were given a thorough shaming Friday when a proposal to grant coal companies $27 million a year in tax breaks was beaten down in committee with an 1 – 8 vote. The only committee member who supported the revenue-losing bill was Timothy Hallinan (R-Gillette), one of the proposal’s sponsors.

Hallinan and two other GOP legislators weren’t able to say how the 1 percent reduction in the coal severance tax in the bill would help the industry now, or ever, but instead offered a hope-based analysis.

“I can’t say this will help the companies right away, but I think in the long run the companies will be stronger and more able to hire their people back,” Hallinan said. But he offered no evidence that another 1 percent severance tax break eight years ago did anything but make coal companies richer.

Opponents of the tax break on the committee, as well as people testifying at the meeting, stressed that the state is already desperately starved for tax revenue, and this cut would make things worse.

“Essentially, $27 million will be lost—it won’t go to our schools, highways, or community colleges—and we’ll have to make up for that money somewhere else,” said Phoebe Stoner, executive director of the Equality State Policy Center. “With our budget cuts right now, we can’t afford any more losses.”

Rep. Scott Clem (R-Gillette) said he thought $27 million a year was “a small price to pay,” even though a fellow committee member pointed out: “It seems to me all we’re doing is increasing the income of coal companies.”

Rep. Roy Edwards, another Gillette Republican, said, “With the production of more coal, it would also bring us the money from the state, and we would be like we haven’t lost any money. But that you will never know unless you give them the opportunity to let private enterprise compete.”

Let’s unpack that statement: Edwards is arguing that a $27 million annual subsidy given to coal companies and covered by taxpayers is a means of letting “private enterprise compete.” Really, coal is suffering right now because it can’t compete with natural gas on the open market. This is precisely why coal backers are trying to push a bill that would amount to providing coal corporations welfare.

The Powder River Basin Resource Council organizer Jill Morrison helped reality return to the committee room: “There are several studies that demonstrate that decreasing the severance taxes on coal is not going to create jobs,” she said. “It didn’t create them in the past,” referring to the coal tax break eight years ago.

Morrison pointed out that coal companies already benefit from Wyoming’s lack of corporate income tax and that, without state help, the industry is in a positive swing.

But reality was too much for Hallinan, who interrupted the next anti-subsidy speaker to remind everyone that Wyoming is forever and inextricably linked to coal.

“Without recovery of the coal industry, the state of Wyoming is going to be in financial distress,” he warned. “And this is one effort to stimulate [the industry].”

Chesie Lee, director of the Wyoming Coalition of Churches, said she was testifying to stand up for the poor. She said the $27 million that would be taken out of Wyoming’s revenues would affect state government, which is already slashing services to those in need as a result of the current economic downturn.

“Twenty-seven million dollars is not a small chunk of change,” she said.

To absolutely no one’s surprise, the executive director of the Wyoming Mining Association, Travis Deti, spoke in favor of the bill. “Coal is one of those heavily taxed and regulated industries in the country and the burden is pretty high,” he said.

But, to some folks’ surprise, the coal industry’s top lobbyist managed to offer a dose of reality of his own: “This [tax break] bill brings up the larger question, that the state relies too much on extraction and we need to have a broader conversation about comprehensive tax reform that broadens our base and is sustainable for the future,” he said.

Enter stage left: House representatives turn to dramatics to call for a Balanced...

Wyoming legislators propose the worst anti-LGBT law in the nation
Scroll to top
Share this ArticleLike this article? Email it to a friend!
Email sent!