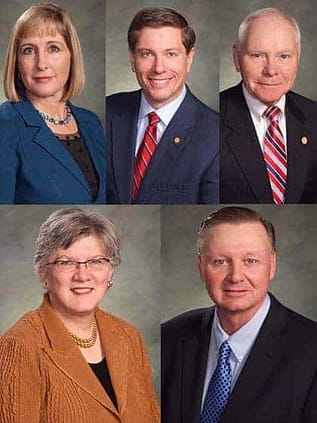 Look at the sharp outfits and winning smiles on these people who think it's fine for a domestic violence shelter to turn away a battered transwoman. Clockwise, from top left: Cheri Steinmetz, Nathan Winters, Paul Barnard, Curt Meier, and Sue Wilson, sponsors of HB-135

With a proposed bill like a hunting license, an extreme right-wing faction of lawmakers has declared open season on Wyoming’s LGBT couples and individuals.

Congratulations, Equality State. Once again we’ve beat our competitors in places like Georgia and Mississippi in a race to the bottom of the shame heap.

“Religious freedom” bills like HB-135 provide special protection to employees of state and local governments whose religious beliefs allegedly make them so queasy around gay and transgendered people that their anti-LGBT actions just can’t be considered discriminatory.

So, say a firefighter refuses to help a same-sex couple, but the fire chief tells him to do his job and go back and get their cat out of the tree, or whatever—that firefighter, under HB-135, can sue the fire department for making him do something against his religious and moral convictions.

But there’s much more to his horror story that’s being sponsored by Rep. Cheri Steinmetz (R-Lingle) and others. Sabrina King, executive director of the American Civil Liberties Union’s Wyoming chapter, said the bill would permit county clerks to refuse to issue marriage licenses to same-sex couples and, under HB-135, keep their jobs. State contractors or grantees, including those that provide important social services like homeless shelters or drug treatment programs, could turn away LGBT families or even children with same-sex parents. Since these programs are supported with tax money, the law would make everyone in Wyoming complicit.

One thing that makes Wyoming’s bill especially vile compared to others is that HB-135 attempts to wipe out all the progress that’s been made in Laramie, which in 2015 became the first city in the state to pass an LGBT anti-discrimination ordinance. It’s as though lawmakers saw one slight glimmer of tolerance in the state and decided to cudgel it to death.

Currently in most of Wyoming, it’s perfectly legal for a commercial landlord to refuse an LGBT family housing, or for a boss to terminate an employee for being gay. But since the Laramie City Council voted 7 – 2 to approve a strong ordinance that protects gay and transgender people from discrimination at work, in housing, and in public places, the city has been at the forefront of Wyoming’s fight against hate.

Andi Summerville, Laramie’s new mayor, said the city council was spurred into action by the Wyoming State Legislature’s refusal in 2015 to pass a statewide LGBT anti-discrimination bill—a real one that would have actually protected LGBT citizens from things like homophobic evictions and firings.

But HB-135 would not only strike down Laramie’s ordinance. Lawyers who have studied the bill said it would also prevent other cities in Wyoming from passing their own nondiscrimination laws—stripping municipalities of their ability to democratically decide not to tolerate hate.

Hate is Bad for Business

Summerville and other officials know that eliminating all or part of Laramie’s ordinance would give another black eye to the state that counts Matthew Shepard among its most famous sons. She plans to testify against HB-135 later this week when it comes up in the House Judiciary Committee.

In addition to leaving LGBT students and others in Laramie unprotected against discrimination, Summerville pointed out that hate has proven bad for business across the nation. There’s no reason to think Wyoming would be different.

She said HB-135 could result in people and businesses leaving the city or deciding not to come to Laramie to live. “Our economic development efforts have been strong here, but we can’t afford to lose one more business,” Summerville said. “The ordinance should be viewed as an asset to the state.”

King, from the ACLU, noted other states, most visibly North Carolina, are paying the price for passing discriminatory laws against LGBT people. The estimated economic cost of its infamous “bathroom bill” that targets transgendered people is in the hundreds of millions and climbing each day. This results from boycotts and generally cooling relationships with various industries whose businesses respect and protect their employees from discrimination.

Among the most prominent industries to speak out against anti-LGBT laws nationwide is the tech sector, which Gov. Matt Mead, the state business council, and many others see as a promising candidate for expansion in Wyoming. Mead thinks tech could be the state’s fourth biggest industry. But tech companies full of young creative people tend not to like setting up shop in backwards, provincial hick states where lawmakers pass hateful legislation—and whatever Wyoming truly is, that’s exactly the perception that HB-135 encourages.

Proponents of a $27 million annual tax break for the coal industry run into...

There was no one to stop the madmen: Bills banning gun-free zones at schools...
Scroll to top
Share this ArticleLike this article? Email it to a friend!
Email sent!