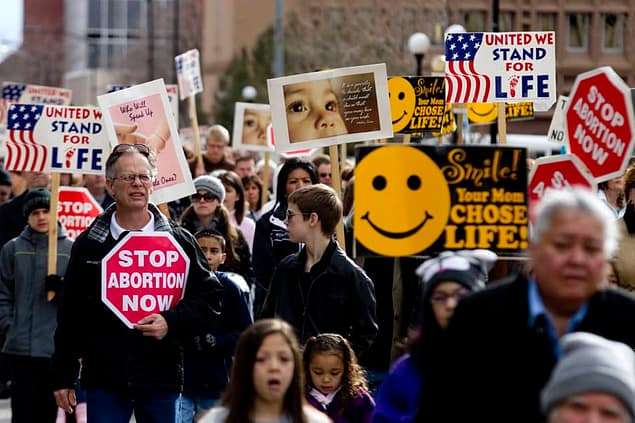 Pro-choice advocates say a package of abortion-related bills is a blatant attempt to make it more difficult for women in Wyoming to obtain a safe, legal abortion. They say the lawmakers pushing the bills are intent on building roadblocks to the procedure. 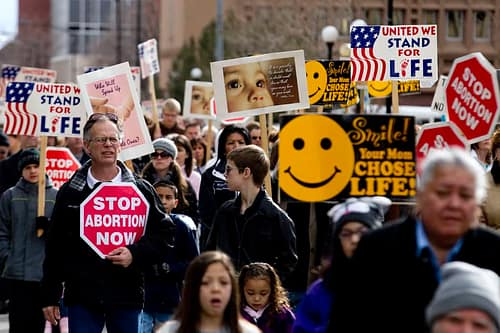 In recent years the anti-abortion movement has attempted, with some success, to take away or restrict women’s access to clinics state by state, and to pass state laws that redefine a fetus as an unborn baby with the same inherent rights as all human beings. The proposed anti-abortion laws passed through committee Monday mirror others in different states created by national pro-life groups.

The three bills that will move onto the full House for debate are:

Anti-abortion out in force

The hearing was standing room only, and some observers sat on the floor behind the committee members as more than 100 people testified about the bills. There was also another room where the overflow crowd could listen to the hearing as it was streamed live across the state.

By Better Wyoming’s unofficial tally, 70 people testified in favor of the anti-abortion legislative package and 31 opposed it (not including the nine committee members and four bill sponsors who spoke).

Rep. Cheri Steinmetz (R-Lingle), spoke for her bill, HB-116, which proclaims a fetus is “viable” if it can feel pain and could live outside the mother’s womb, beginning the 20th week of pregnancy. The bill would effectively ban abortions after 20 weeks. Scientists and physicians who perform abortions have cited evidence that a fetus likely cannot feel pain before the third trimester (roughly the 28th week).

Steinmetz said it’s ironic that two years ago the House passed a bill that said violent criminals on death row had to be sedated so they would not feel pain when they were executed by firing squad. “The [House] was quite concerned about the issue,” she recalled. “HB-116 only seeks the same respect for the life of an unborn child.”

Rep. Clem proposed a bill that would add a penalty to existing law that says a physician performing an abortion has to notify the state within 20 days after the procedure. Clem’s bill would give the doctor 50 days to file an abortion report, but after that he or she would be fined $1,000 for every 30-day period the report is late. Subsequent violations could send the physician to prison for up to a year. Clem’s provisions were included in HB-250, the “clean up bill” sponsored by Sue Wilson (R-Cheyenne).

“If we’re going to make policy for the state we need to know with fairly certain accuracy what kind of information [about abortion] we have,” said Clem.

But the bill’s opponents said there are only two abortion providers in the entire state, both in Teton County, and combined they only perform about 20 abortions a year. With so few abortions, if the goal is “fairly certain accuracy,” a new law to police doctors doesn’t seem necessary.

HB-182, sponsored by Rep. Chuck Gray (R-Cheyenne), said a physician must offer a pregnant woman the opportunity to hear a fetus’ heartbeat and have an ultrasound so she can see an image of the fetus. Gray said 23 states have similar ultrasound laws.

“This law puts Wyoming in good company. … There is solid legal footing for this bill, and it’s also the right thing to do,” Gray said. He did not mention that several ultrasound bills in other states are being challenged in court.

The freshman legislator said his bill offers an opportunity, not a mandate. “It doesn’t make a mother see something she does not want to see,” he said. “The woman remains completely independent in her decision. It just means the state has done everything in its power to see that her ultimate decision is informed.”

But critics pointed out that compelling doctors to offer women specific information to change their minds about abortion amounts to coerced speech, and that because people tend to view their doctors as impartial experts, they tend to take their advice.

Rep. Cathy Connolly (D-Laramie) spoke at the meeting and said she is concerned about the 24-hour waiting period a woman must endure after seeing an ultrasound before she can obtain an abortion. “That’s too long, especially when a woman has to travel halfway across the state,” she said.

Connolly also criticized HB-132 for seeking to put physicians in jail for doing their jobs. “We want to encourage physicians to come to this state, not punish them,” she said.

Connolly noted that anti-abortion bills like the current package have been offered many times in the House. Although she didn’t mention her by name, she recalled how one former legislator, Casper rancher Lisa Shepperson, a Republican, was eight months pregnant when she strode to a House microphone to debate an abortion bill several years ago.

“You could hear a pin drop,” Connolly recalled of the tension-filled moment. “She looked each of us in the eye and said, ‘When I go to the doctor I want three people in that room: Me, my physician and my husband. You stay out.’ And we defeated every one of those bills.”

The misogyny of “informing women”

“What I have found is that many of those who call or come to our center 100 percent abortion-minded or vulnerable, when they do come in they are not coerced,” she said. “We provide facts, information and with her permission an ultrasound. … Ninety-nine percent choose life. The other 1 percent, we’re not sure. They leave our center and say, ‘You have given me much to think about.’“

She said one young woman thanked her “for making me realize I was carrying a child.”

For many women in the audience, however, the idea that someone had to be told she was going to give birth to a child was a surreal moment.

“There’s a lot of condescending talk going on in this room about women not knowing their own minds and the need for them to see an ultrasound,” Lori Brand, a Cheyenne attorney, said. She assured the committee that women are well-informed about what happens when an abortion is performed.

Brand said the people pushing for ultrasounds to be shown to women who have decided to have an abortion “are not physicians who are trying to help a woman decide whether or not to terminate a pregnancy. It is ideologues who are saying, ‘We cannot trust Wyoming women to make that decision. There are restrictions placed on Wyoming women that you would not want to see in place for procedures on Wyoming men.”

Reducing abortions in a state where barely any are performed

But the arguments against the bills were largely overshadowed by testimony ranging from wonky to tearful by people who arrived at the meeting from throughout Wyoming to support them.

Randy Rhodes, president of Right to Life of Laramie County, said “not one of these four bills takes away a woman’s right to have an abortion. They will reduce the number of abortions.”

He disagreed that fetuses cannot feel pain until the third trimester, calling it a falsehood. “It’s much earlier than that,” he said, but offered no evidence in support of his claim. He also brought up a controversial, thoroughly debunked allegation that Planned Parenthood sold fetal tissue from miscarriages and abortions for profit. Rhodes claimed the family planning agency “sold baby parts as if it was a game of Twister or an auto parts store.” A few audible groans were heard when he made that last statement.

“What’s wrong with doctors reporting abortions they do or banning trading in baby parts—are you kidding me?” attorney Darren Smith asked indignantly. “What’s wrong with saying a baby is vital when it feels pain or a young woman should have an ultrasound?”

Several women described their own choices about whether to have an abortion, and many shed tears when they shared these emotional moments in their lives.

Terri Davidson said when she became pregnant after two years of marriage, it created a lot of friction with her husband. Her father offered to pay for an abortion. She chose to keep and raise the baby, and said she made the right choice. When she tried to have another child later in life, she found out that she couldn’t get pregnant. If she had aborted her first child, Davidson said, she would have never been a mother.

The three abortion bills will now go to the full House, where they will be initially debated and voted on by the Committee of the Whole to determine if one or any advance to a second and third reading. If the bills make it through the House, the process will be repeated in the Senate. If that happens, expect another standing room only, even more emotional hearing as the public gets its final chance to testify about abortion this session.[/fusion_text][/two_third][one_third last=”yes” spacing=”yes” center_content=”no” hide_on_mobile=”no” background_color=”” background_image=”” background_repeat=”no-repeat” background_position=”left top” border_position=”all” border_size=”0px” border_color=”” border_style=”solid” padding=”” margin_top=”” margin_bottom=”” animation_type=”0″ animation_direction=”down” animation_speed=”0.1″ class=”tomoveSidebar” id=””][tagline_box backgroundcolor=”” shadow=”no” shadowopacity=”0.7″ border=”1px” bordercolor=”” highlightposition=”top” content_alignment=”left” link=”” linktarget=”_self” modal=”” button_size=”” button_shape=”” button_type=”” buttoncolor=”” button=”” title=”Tell Your Senator to DEFEND WYOMING WOMEN’S REPRODUCTIVE RIGHTS” description=”” margin_top=”” margin_bottom=”” animation_type=”0″ animation_direction=”down” animation_speed=”0.1″ class=”” id=””]As one former Wyoming lawmaker said: “When I go to the doctor I want three people in that room: Me, my physician and my husband. The government can stay out.”

Contact your local state senator and urge him or her to VOTE NO on these anti-abortion bills (not sure who your senator is? click here). Or, you can use this easy form to contact the whole legislature—you can only comment on one bill at a time using the form, so submit once for HB-116, another time for HB-182, and once more for HB-250.

House members evoke a sense of danger to argue against UW making its own decisions...