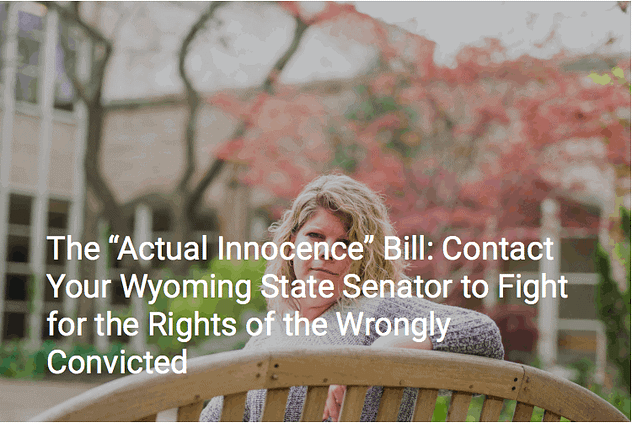 Kristine Bunch was wrongfully convicted in Indiana of arson in 1996 but was exonerated after 17 years with new evidence. If she'd been in Wyoming, she'd still be in prison.

Let’s see what you remember from your high school civics class.

One thing everyone agrees about is that if a person has been convicted of a felony and evidence is found later that proves the person is innocent, the courts will order a new trial.

Well, no. Not in Wyoming, at least.

In fact, there are several arbitrary rules here that can keep an innocent person in prison even if evidence to exonerate him comes to light. For instance, new evidence must be discovered within two years of the start of a person’s incarceration in order to qualify that person for a new trial.

“Right now we have an arbitrary and unjust time limit,” said Aaron Lytle, a Cheyenne attorney and member of the Rocky Mountain Innocence Project. “If [evidence] is found more than two years later, you’re just out of luck.”

Equally random is the state’s distinction between DNA- and non-DNA-based evidence. See, if new DNA evidence is discovered, it can be used to obtain a new trial regardless of how long it’s been since a person started serving time. But if that evidence is not DNA evidence, the two-year rule applies.

HB-144 sailed past the House Minerals, Corporations and Economic Development Committee by a 9-0 vote, and the 60-person House passed the bill unanimously. Proposals with that much support in one chamber are typically granted at least the dignity of a vote in the other.

But on Monday, the Senate Judiciary Committee killed Pelkey’s bill. After taking about a half-hour of public comments—all but one person spoke in support of the bill—Sen. Dave Kinskey (R-Sheridan) made a motion to move the bill, but no one seconded it. Under legislative rules, that killed the bill for this session.

INSTEAD OF JUSTICE, AN EXPENSIVE, REDUNDANT STUDY

The committee decided to ask the Legislative Management Council to select “actual innocence”—the jargon term for this subject—as an interim study, part of a broader review of the criminal justice system that will take place after this legislative session. The problem with that idea is that lawmakers, judges, attorneys, prosecutors and law enforcement already did an interim study last year and couldn’t agree on a bill to recommend. So Pelkey, frustrated by previous efforts to convince his colleagues that this is a real problem in Wyoming, sponsored this bill himself.

Pelkey said he was surprised by the committee’s decision. “We get a unanimous vote in the House and all of a sudden we’re blindsided by the attorney general’s office that raised some concerns we didn’t even discuss during the interim last year,” he said.

Instead of passing a law that could correct injustices, taxpayers will foot the bill for another interim study that will gather dust on the shelves.

THE LONE, LOUD VOICE OF DISSENT

The single person to speak against HB-144 had enough heft to kill it: Chief Deputy Attorney General John G. Knepper.

The way Knepper portrayed it, the court system would be swamped by felons asking for new trials if HB-144 passed. “This is an exoneration process that’s available to anyone convicted of a felony,” he said. “Including people who have served their time, they’re back in society and want to press so they can have another trial.”

The lawyer seemed particularly upset that poor clients file their motions pro se and do not have to pay for it. “Pro se cases sort of tumble in on a regular basis,” he said. “We’d like to see some point where we can say, ‘OK, you’ve had your chance, but we’re done.’”

Knepper went on with a litany other complications he said would engulf the state’s legal system if the two-year ban were lifted for new non-DNA evidence. He dubiously argued that stakeholders had not been given enough notice of the committee meeting, claimed the issue had not received sufficient discussion despite the last interim study, and effectively browbeat the committee into doing his bidding.

Of course, Knepper’s concerns are far-fetched. Pelkey pointed out that other states with similar laws to the one he proposed have not been deluged by people seeking new trials. Lytle said Arkansas and Idaho are the only states that, like Wyoming, have a two-year limit to file a motion based on new evidence. The other 47 states get by just fine letting innocent people out of prison when new evidence arises after twenty-four months.

But the law could have helped real Wyomingites. DeWayne Spellers testified to the committee that he had been in a traffic accident in 1988 and the man who caused the crash fled on foot. When law enforcement officers investigated, however, they told Spellers they knew he was responsible for the accident.

He was convicted of attempting to obtain funds under false pretenses after he filed an insurance claim, which is a felony. He was sentenced to probation and completed his time, and got on with his life.

That is, until 16 years later, when the FBI and state investigators knocked on his door to ask him about the accident. A man in custody had confessed to a number of crimes, including the accident Spellers was convicted for. “An FBI agent told my lawyer while I was present that he had evidence that proved I’m innocent, but I never saw it. I don’t even know what it was.”

With the two-year statute of limitations on filing for a new trial, Spellers was frustrated. “I just want to clear my name,” he said. He applied for a pardon from then-Gov. Dave Freudenthal, who denied his request.

As he walked out of the committee room, others in the audience told Spellers they were sorry about what happened to him. He said he was disappointed when the bill was killed, but he’s not giving up. “I’ve been coming to hearings for years,” he said. “I’ll keep coming.”

With the budget cut to its limit, the House turns to inanity and minutia as...
Scroll to top
Share this ArticleLike this article? Email it to a friend!
Email sent!