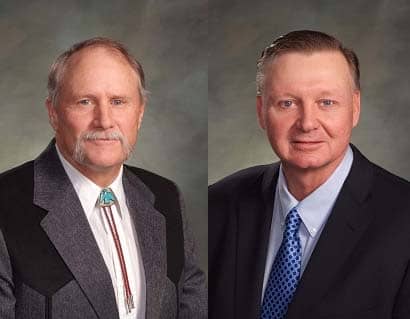 Senate Agriculture Committee members Larry Hicks and Curt Meier particularly relished hassling women about pregnancy and scoffing at people for mentioning the bills don't have provisions for victims of rape or incest.

Members of the Senate Agriculture Committee who support two anti-abortion bills made their biases clear during public comment period before passing both proposals with 4 – 1 votes. The two bills, which already passed the House, will now come before the full Senate.

Lander resident Jennifer Wilson objected to the bills referring to a fetus as an “unborn child.” She also said, “There’s an implication that a woman doesn’t understand what being pregnant means, or what having an abortion means. I would frankly be astonished if anyone could present a woman who was excited or happy to have this procedure done. No one goes through something like this without tremendous forethought and weighing her situation very carefully.”

“I have one question,” said Sen. Larry Hicks (R-Baggs). “Do you think we should abolish all the laws that we have in this country that when someone commits homicide against a pregnant woman it’s no longer a violation to also kill whatever terminology you want to apply to it?”

“Absolutely not,” Wilson replied. “I believe that the decision to carry a pregnancy to term is up to a woman and her husband or partner and the physician. It is a very difficult and horrendous occasion when a woman who is willingly pregnant wanting to carry that fetus to term is killed. I honestly do not have the ability to answer that question right now.”

The men weren’t done hassling Wilson. Sen. Curt Meier (R-LaGrange) said when he recently had ankle surgery the physician told him what to expect. “Shouldn’t a physician fully inform a pregnant woman what’s going to happen?” he asked, referring to House Bill 182, which would require a physician to offer a pregnant patient an ultrasound.

“I’m not a medical doctor, but I think not informing a patient would be malpractice. Again, it would absolutely stun me to think that a woman would ask for an abortion without knowing the consequences of that,” Wilson said. “I have friends who have undergone this procedure and to a person they were very well-informed, and they were not asked—nor should they be asked—to listen to a heart rate or have an ultrasound.”

Wilson said she once had a trans-vaginal ultrasound when she was pregnant. “It is an amazingly unpleasant procedure,” she recalled. “To have that state-mandated is unconscionable.”

The legislators didn’t seem to be embarrassed by telling a woman they knew more than she does about pregnancy, but they suddenly ran out of questions.

While a House committee that approved three abortion bills a week ago was dominated by men and women who oppose abortion, advocates of protecting women’s reproductive rights packed Thursday’s hearing. In addition to HB-182, the committee also approved HB-116, which makes it illegal for anyone to traffic in fetal tissue or body parts—including donating that tissue for research. Opponents of that bill pointed out that selling baby parts is already a crime, and they asked what evidence exists that there’s a problem in Wyoming.

The answer, of course: There is no evidence. Several people testified that it’s well known that Planned Parenthood sells baby body parts for a profit; opponents countered that the much-publicized “scandal” has been thoroughly debunked.

Linda Anderson of Platte County testified that both bills “provide a solution to a problem that doesn’t exist” and “are intended to discourage abortion.” If that wasn’t the case, she added, the bill would also cover the unintended consequences that could happen when a pregnancy is carried to term.

Several opponents of the anti-abortion bills objected to the measures being assigned to the Senate Agriculture Committee instead of a more appropriate one like Labor, Health and Social Services. Chairman Hicks obviously got tired of the complaint. Near the end of the four-hour hearing, he chastized Wendy Volk of Cheyenne, who noted the legislation didn’t even include a provision that covers women who are the victims of rape.

“Mrs. Volk, the purpose of this hearing is not for people to get up and question the sponsors about other statutes,” Hicks said. “The purpose is to allow people to travel across the state to speak specifically on the legislation before us. … We’re not here to debate what is or isn’t in the statutes.”

No one who spoke in favor of the anti-abortion bills had to answer negative questions from committee members or were dressed down for daring to bring up an issue that clearly isn’t addressed in either bill, like any mention about how it impacts rape victims.

The most frequently addressed criticism of the two bills was how they represent direct governmental interference in choices about women’s reproductive lives that should be private decisions made by a woman. The term “state overreach” was mentioned by speaker after speaker.

Dr. Larry Meuli, a former member of the Wyoming House, said for every three women who are denied an abortion, one family will end up in poverty. He said like other anti-abortion laws, if a woman gives what the state believes to be is a wrong answer about her choice, “she has to jump through more and more hoops.”

With the budget cut to its limit, the House turns to inanity and minutia as...

Refusing to raise new revenue, lawmakers take a slash-and-burn approach to education...
Scroll to top
Share this ArticleLike this article? Email it to a friend!
Email sent!