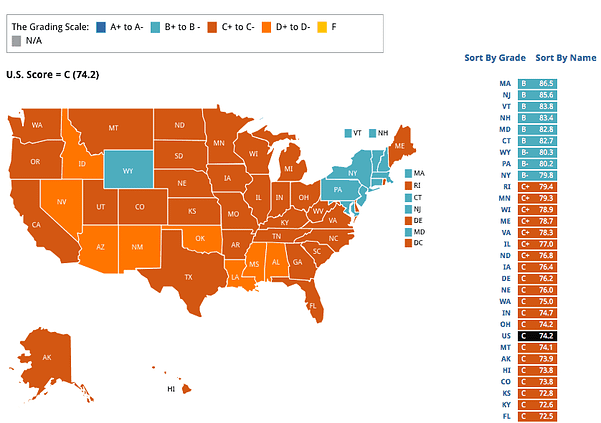 Thanks to strong funding support for education, Wyoming's schools rank among the highest in the nation

Education in Wyoming is about to see the bottom drop out of its funding, as the reverberations from recent years’ economic busts hit classrooms full-force.

Wyoming’s public education system is ranked high nationally, the result of decades of strong investment mandated by the State Constitution (and a 1995 state Supreme Court decision, “Campbell I”).

“With the ‘Campbell I’ decision, we built sort of a world-class system—and now they are dismantling it,” said Ken Decaria, executive director of the Wyoming Education Association. “‘It’s almost the death knell of where we are in education, and it’s going to take a long time to recover if the cuts go through where they’re at.”[/fusion_text][/one_third][two_third last=”yes” spacing=”yes” center_content=”no” hide_on_mobile=”no” background_color=”” background_image=”” background_repeat=”no-repeat” background_position=”left top” border_position=”all” border_size=”0px” border_color=”” border_style=”” padding=”” margin_top=”” margin_bottom=”” animation_type=”” animation_direction=”” animation_speed=”0.1″ class=”” id=””][fusion_text] 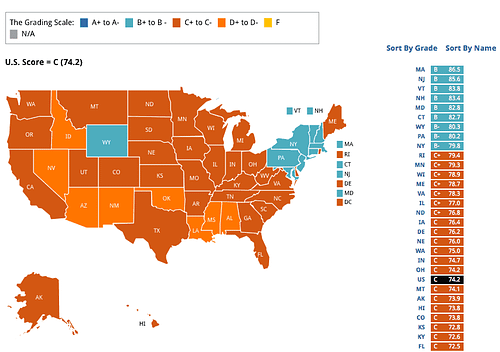 Thanks to strong funding support for education, Wyoming’s schools rank among the highest in the nation (source: EdWeek’s 2017 Quality Counts study)

The ruling that built Wyoming education

In its landmark 1995 “Campbell I” decision, the Wyoming Supreme Court said every child must have the same opportunity for a quality education, no matter where they live or the financial condition of their local school district. For more than two decades the Legislature has struggled to comply with that order, whether its revenues are up or down.

“Part of it’s the old-timers—and some of the new-timers—who are very resentful of the Supreme Court handing them this mandate, even though it’s clearly in the constitution,” said Marguerite Herman, a member of the Laramie County School District No. I Board of Trustees. “So you have that resentment, which is heightened with the competition for every dollar right now.”

Herman said the present situation has produced in the Legislature “a group that will cut anything at any cost.” But there’s also a second faction that acknowledges that cuts are necessary, but who want to do it thoughtfully, methodically and constitutionally. “No one is saying ‘no cuts.’ It’s like, cuts—how much and where and how,” she said. The tension lies between those two factions.

At the end the day, it’s people who will be cut

“It really doesn’t matter what they say they’re cutting, what it will be at the end of the day is people,” said Decaria, a former state senator who represented Evanston. “Because 80-plus percent of any budget is employees. They can call it anything they want, but innocent people are going to lose their jobs.”

Herman says she was appalled when she watched the Senate pass a bill offered by Sen. Charlie Scott (R-Casper) that cut $91 million from education without even identifying what the reductions would affect.

“A lot of people who know better voted for that $91 million cut,” she said. “And by definition it’s unconstitutional, because you’re taking $91 million off a cost-based system, so it’s no longer cost-based.”

The Senate and the House are both considering the education budget simultaneously, and Decaria noted different approaches.

“[The Senate] is just into ‘we need to cut’ and their theory is we’ll come back and look at revenue at a later date,” he said. “I’m not so sure I buy into that. It’s just the nature of people. The House has some deep cuts but it also has some revenue streams. At least House Bill 226 has the ability to fill that $400 million hole.”

Still, the WEA head said the House is only considering existing revenue streams, and not new ones. “They’re looking at diverting the 1 percent statutorial mineral severance tax to the school foundation. They’re looking at the Rainy Day Fund; they passed a half-cent sales tax that would kick in if they spent it down to $500,000.”

Look to the last time education was dismantled

Both Herman and Decaria say the Legislature needs to look back at what happened to education in the 1980s, when another minerals bust drastically changed the state’s ability to keep good times rolling.

“When I was first hired we were like sixth in the nation for teacher’s salaries,” Decaria recalls. “So when we went through the bust they started freezing salaries. We spent a lot of energy and time and resources going to other states [to recruit teachers]. When they found out what Wyoming was going to be like, they went home.

“I honestly believe we lost 10 years of good educational progress, because that kind of uncertainty is so detrimental, it just ripples through the system,” he added.

There may be the will to let the bill die

Lawmakers’ attempts to wrangle the education budget have been so disordered and deficient that they might take a look of their lack of progress during the session and kick the can down the road.

“There are rumors that with all of the cuts to the supplemental bill, there may be the will to simply let the [education funding] bill die,” Herman said. “And it could die in conference committee—oh, it very well could.”

If that happens, she explained, the Legislature would revert back to the original budget bill from last year, which would mean nothing will be done this year to help lower the budget deficit for education. The task would likely fall on an interim committee.

Decaria stresses that things are not all doom and gloom. “Wyoming has been good to education, and it’s not like we’re not grateful,” he says. “It’s just that times get hard and you need to stop and see how you’re doing. We want people to know that Wyoming kids are still making great educational progress.”

What upsets him, Decaria says, is the same old claim made by legislators and others that “Wyoming isn’t getting a big enough bang for its buck.”

“I get tired of that drone,” he says. “People who say that aren’t looking at the numbers. [The national school rating system] Quality Counts says we’re ranked No. 7 in the nation, and we’re the best in the West.”

“Despite Charlie Scott’s baseless assertions, Wyoming’s [school system] is good and students are achieving well,” Herman said. “The value of a good education system isn’t so we can build fiefdoms that have a bunch of money. …  The whole community is enriched by it.”

Judiciary Committee to puff on weed bill a while longer before passing it to...
Scroll to top
Share this ArticleLike this article? Email it to a friend!
Email sent!