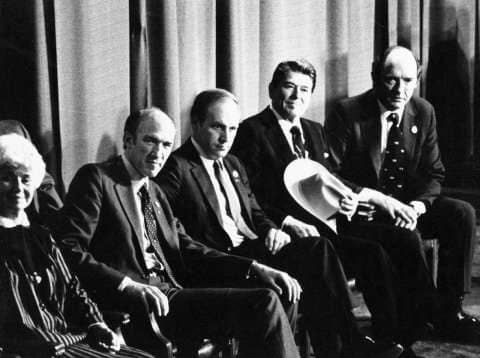 The last year an anti-abortion law passed in Wyoming was the same year Dick Cheney, center, was appointed Secretary of Defense under President George H.W. Bush

The Wyoming Legislature hasn’t passed an anti-abortion bill since 1989, when lawmakers decided to require parental consent and a 48-hour waiting period for minors. Each time “right to life” advocates have brought a proposal since then, pro-choice activists haven’t let them get very far.

But it appears that record is in grave jeopardy. Both houses have passed two abortion bills this session: House Bill 116, which prohibits the sale of fetal tissue from aborted fetuses, and HB-182, which requires physicians to offer women who want an abortion the opportunity to have an ultrasound and hear a heartbeat, if one can be heard.

But both measures passed the House and Senate with different amendments, so the chambers will have to either concur with changes made to the bills or try to reach compromises in separate joint conference committees. With only a few days left in the current general session, the best outcome at this point for pro-choice individuals and groups would be for legislators to run out of time to reach a consensus. If that happens and lawmakers go home Friday, the bills would die.

Infringing on a private and personal matter

Many pro-choice women and men in Wyoming have banded together to oppose both bills. Wendy Volk, a Cheyenne realtor, spoke out against the proposals at a legislative hearing last month, only to be chastised by a member, Sen. Larry Hicks (R-Baggs) when she pointed out that the bills don’t offer any exceptions for rape, incest or danger to the life of the mother. Hicks told her that the Senate Agriculture Committee—which was bizarrely assigned to hear and vote on the abortion bills—didn’t come to hear her or anyone else talk about any deficiencies they perceive in current law.

“These bills pertain to a very private and personal matter between a woman and her medical professional,” Volk said in an interview Monday. “I believe in the right to privacy. The government has no business in the private healthcare discussions between individuals and their health-care professionals.”

Volk, a Republican, said the bills represent direct governmental interference in choices about an individual’s life that should be private, as well as “government overreach” of individual rights.

“I have absolutely no interest in knowing what my male friends, colleagues or male legislators discuss with their doctors about a vasectomy, Viagra®, erectile dysfunction or prostate problems,” she said.

One lobbyist who has been working against the bills since they were introduced early in the session is Sheila Bush, executive director of the Wyoming Medical Society. Bush brought a ray of hope to the issue Tuesday when she told Better Wyoming that Senate amendments have made improvements to both House bills.

She said that while HB-182 is still a “terrible precedent” for the state to set, amendments have reduced the impact of the bill on reproductive rights. Bush said that a 24-hour waiting period has been excised from the bill. Originally, it required that before a woman who wanted an abortion could have the legal medical procedure, she had to talk to a physician who would be required to give her information about her options, and then she would have to wait a day.

Also removed was a document that had to be signed by the patient confirming that her physician offered her the opportunity to have a free ultrasound and hear the heartbeat of the fetus if it was possible.

Sen. Tara Nethercott (R-Cheyenne) explained that if a female patient said a physician did not properly offer the information about abortion choices he or she is required to provide, it would simply be a case of “she said, her physician said,” and neither could prove what happened. She also said contrary to what some other legislators claimed on the floor during debate, such a document is a medical record that would be discoverable and could be used in any litigation filed against a physician.

Bush stressed that the Medical Society does not take a position on abortion and never has, but that her lobbying aligns with her organization’s “fiercely protecting the physician-patient relationship, and the physician’s ability to practice medicine without government intrusion.”

“Let medicine be medicine. Trust your physicians, trust their position,” she said. “Many of these [anti-abortion] bills in past sessions have given a strong tone [charging] physicians are doing something they shouldn’t be, and they need to get the government involved.”

Whether it’s reporting about abortions, dictating standards of care or giving very restrictive language for critical medical guidelines “is really not the place of the Legislature,” she said. “If the Legislature starts that, they’ve started a game that they’ll never get caught up with. They’ll never keep pace with the advances in medicine.”

The other bill, HB-116, would effectively stop all donations of tissue in Wyoming for the advancement of science. There are only about 20 elective abortions in the state per year because there are only two physicians in Jackson who perform abortions at their clinics. However, under the state’s definition of abortion, miscarriages are included as well as some other procedures.

“For someone who had to terminate a pregnancy, fetal tissue is such a rich environment for science—stem cell research for MS, for Parkinson’s and Alzheimers,” Bush said. “So we’re curing these chronic illnesses that are afflicting society.”

She added that oftentimes there can be a great deal of closure for a woman who has had to live through a very tragic event by being able to donate her fetal tissue “so she can contribute something positive” to help cure a disease.

“You want to continually send a message to say, inside of an emotional space, inside of a religious space, inside of a moral space, there’s a great deal of conversation, and we certainly understand that,” Bush said. “There’s room for all of those to have a voice, and we’re not trying to stop that. … I think someone can be very much pro-life and still recognize the faults and issues inside of [the fetal tissue] bill.”

Sen. Charles Scott (R-Casper) successfully offered an amendment before the bill passed to address “unintended consequences” that had been pointed out by other lawmakers and lobbyists that should be included in the legislation.

“These are things that are routinely done,” he said. “You get some cells, you transfer the tissue to the lab and do some tests. You’re looking for some medical condition that could have caused a real problem with the fetus, the unborn child.”

Identifying such conditions, he added, can help a woman who has a future pregnancy by administering the right dosage of vitamins and charting a course for proper prenatal care.

“You can also sometimes get information for the medical treatment of a blood relative,” Scott noted.  ”There may be a syndrome involved that can cause serious abnormalities in utero, but may also cause difficulties for older siblings. If you know that, you can inform [their] medical treatment.”

Scott said hospitals generally require tissue from all operations performed at the facility so they can monitor quality control. All of these examples of using tissue would be legal under the amended version of HB-116.