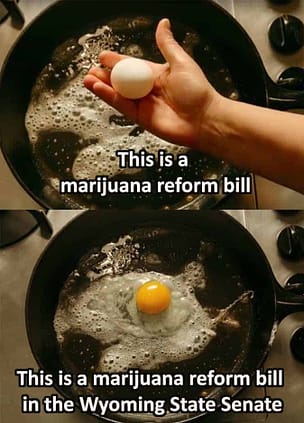 There was a time when introducing a marijuana bill in the Wyoming Legislature was a totally futile act. Legalization? Forget it. Ditto decriminalization and medical marijuana.

Legalization of recreational marijuana is still a non-starter, but in recent years some bills to reduce Wyoming’s harsh sentences for pot have made it out of committees before being rejected on the House floor. Believe it or not, that’s progress.

Most lawmakers now take medical marijuana seriously, even though there is not enough support yet to actually pass legislation. Lawmakers haven’t evolved as fast on the issue as voters, who last year showed 81 percent support in a University of Wyoming poll.

Instead, lawmakers have chosen to focus their attention on a different type of weed bill.

Three years ago, a Laramie County judge dismissed felony charges against a man caught with about two pounds of edible marijuana in his vehicle. The judge ruled Wyoming lacks a law that makes possessing any specific amount of edibles a felony, so Republican “tough on crime” legislators rushed to plug that loophole.

But their desire to get a law on the books hasn’t resulted in any new statutes, mostly because lawmakers can’t figure out how they should calculate the amount of THC in a pot product and what the corresponding penalty should be. THC is the psychoactive ingredient in marijuana. The Joint Judiciary Committee even made edible weed an interim topic last year, but still couldn’t come to consensus.

As a result of the Legislature’s confusion and conflicts over how to treat the green herb and its byproducts, this year’s session saw a promising marijuana reform bill sputter and die.

Efforts to reform marijuana rules have traditionally been the purview of Democrats. But this year, a young conservative freshman representative, Jared Olsen (R-Cheyenne), took up the mantle and sponsored House Bill 197, which would have dramatically decreased penalties for minor possession. A host of conservative House members signed on as co-sponsors, including Reps. Scott Clem, Lars Lone, Nate Winters and Bill Pownall. In total, one-fifth of the entire House endorsed the bill.

HB-197 had the initial support of a unique bipartisan coalition. It included law enforcement, prosecutors, the state attorney general’s office, the state Department of Health, civil libertarians and pro-marijuana advocates. They settled on a measure that reduced the penalty for first-time offenders who possessed less than three ounces of the drug in plant form and eight ounces of edibles.

That amount of weed is currently a misdemeanor that carries a maximum penalty of up to one year in prison and a $1,000 fine—one of the harshest penalties in the nation. It doesn’t matter if it’s in a baggie, or consists of a single joint or roach. Prosecutors point out that some first-time offenders receive a deferred sentence or probation, but what they don’t say is that it often depends on how good of an attorney the defendant can afford.

HB-197 would have dropped the maximum first-time penalty for this amount to 20 days in the county jail and a $200 fine. Penalties increased but remained misdemeanors for second and third convictions, but a fourth would be a felony subject to up to five years in prison and/or a $10,000 fine. Possessing more than three ounces is already a felony, even if it’s a first offense.

Frank Latta, a former House member who has also served as mayor of Gillette, is the new director of the Wyoming chapter of the National Organization for the Reform of Marijuana Laws (NORML). The group would obviously prefer no jail time or fine for a first offense involving a small amount of pot, but he said the bill was a compromise NORML could support.

“We worked long and hard with the committee to get the bill where it was at,” Latta said. “It was questionable whether we could support it, but we were waiting to see how it would come out. It was better than nothing.” But soon, that would change.

This is why we can’t have nice things

The House passed the bill by an overwhelming margin: a 52 – 6 vote. They even improved it a bit, reducing the “look back” provision from 10 years to five, meaning that if someone gets nabbed for possession a second time, but it’s been more than five years since the first, it won’t count as a second offense or be subject to a more severe penalty.

Upon receiving the bill, the Senate changed it so it was no longer palatable to the House, NORML, or civil libertarians who had supported it.

First, the Senate Judiciary Committee altered the bill so it no longer applied to the plant form of marijuana, and only to THC byproducts—edibles, oils, extracts, etc. The panel also returned the look-back provision to 10 years.

Controversy erupted when Latta charged that Senate Judiciary Chairman Leland Christensen (R-Alta) had turned HB-197 over to law enforcement lobbyists to rewrite the bill however they wanted. Christensen denied doing so, but the bill cleared the panel with all of the changes police and prosecutors wanted. Only law enforcement was invited to bring amendments to the committee. NORML immediately began working against the bill.

Once the bill made it to the full Senate for debate, Sen. Chris Rothfuss (D-Laramie) pointed out that HB-197 still hadn’t fixed the fundamental flaw that killed the edible THC bill in 2016: Namely, that it assigned penalties based on the entire weight of the THC product, rather than the actual amount or potency of the psychoactive ingredient in it.

“If I like my brownie rich and I add a lot of extra volume of water and cream, and maybe a little additional flour, I become a felon,” Rothfuss said. “And if I like some dry, plain and less tasty THC brownies then I can be a misdemeanor. I can have four times the concentration. Those can be some potent brownies.”

Still, the Senate passed its version 20-10, with some members incorrectly telling their colleagues that even though the plant form had been removed, the penalty for less than three ounces was also 20 days incarceration and a $200 fine. Nobody bothered to correct the error, perhaps because by this time the bill was such a convoluted mess nobody knew for certain what it actually did.

The House voted 28 – 30 against the Senate’s version, and after a conference committee failed to work out the differences, the bill died.

No amount of edible marijuana in Wyoming is a felony

Dr. Wendy E. Braund, senior administrator of the Public Health Division and State Health Officer, said she’s reviewed penalties for edibles in other states and “they’re all over the map.” She said nine states consider any amount of marijuana extract a felony, while in 10 states any amount is a misdemeanor.

“Right now we have no weight [in the law],” explained John Knepper, chief deputy attorney general. “We’re not seeing these except as misdemeanors now, but the law enforcement community has seen an uptick as people come to recognize that no amount of edible marijuana is a felony in Wyoming.

“Many other states do not tie the penalty to the form of the drug,” he added. “And that’s our challenge with the way the Wyoming law has evolved, because [other states] just say a THC content of greater than X or Y, and they don’t distinguish between the brownie and the hash oil. It’s sort of a quirk of Wyoming law, and why it’s being addressed a little differently here than in other states.”

So we’re quirky in Wyoming, but we already knew that. The question is whether all of the stakeholders in the marijuana issue can ever come to an agreement that becomes a fair law.

Medical marijuana is the next logical step

Olsen said he’s game to try another bill, but not until after the budget session. If he’s not re-elected in 2018 he won’t be able to sponsor another one. In any event, the next bill will have to be different than the one that just got kicked to the curb. The House and Senate clearly have visions that don’t match, and NORML has been burned to the point it may be difficult to find another compromise it can ever support.

Whether the issue is resolved will likely be determined by how anxious state legislators are to make felons out of nonviolent offenders for possessing an excess of gummy bears and marijuana brownies. Will the “law and order” crowd win the battle, or will pro-marijuana groups join with legislators who realize paying to lock more people up doesn’t make fiscal or societal sense at a time when other states are legalizing both plant and edible forms of marijuana?

It’s only a guess, but with back-to-back failures to “felonize” edibles, legislators who couldn’t wait to tackle the issue may decide they have better things to do. With four-fifths of Wyoming’s population already favoring medical marijuana, that seems to be the next logical step.