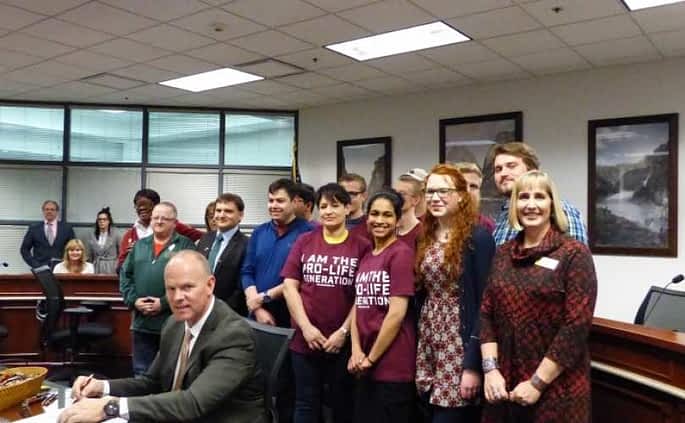 Gov. Matt Mead signs the first abortion bills passed in Wyoming in 28 years. He's joined by bill sponsors Rep. Cheri Steinmetz, far right (get it?), and Chuck Gray, second from left in the front row (with the stupid haircut).

“Pro-life” Republican lawmakers in Wyoming tried to create two new state laws to put women and doctors in jail if they violated the far-right’s extremist agenda on abortion.

On the bad news side of the ledger, the GOP passed two new abortion laws, the first in the state since 1989. One measure, House Bill 116, created a state statute that prohibits the donation of fetal tissue from abortions. The other, HB-182, requires doctors to provide women seeking abortions information about ultrasounds and the fetal heartbeat in order to dissuade them from the procedure.

But while the two losses were disheartening to women’s rights advocates, they can find some solace in the fact that lobbying efforts, backed up by public support, persuaded legislators to take out some of the most egregious and potentially unconstitutional provisions in both proposals.

Yes, they definitely are, because laws like these open up the door for future legislation that’s even worse. But HB-116 and its obscenely harsh penalties—fines of at least $10,000 and jail terms of one to 14 years to anyone who donates fetal tissue or facilitates donations—are not likely to change the current situation about the use of fetal tissue from abortions in Wyoming.

Although a much-hyped video provided the scare tactics about “selling baby parts” needed to pass this bill, there is no scandal involving the donation of fetal tissue from abortions. The low-life “pro-life” videographer who supposedly documented Planned Parenthood officials talking about making a profit by selling fetal tissue and baby body parts was edited as part of a smear campaign to outrage people.

It partly succeeded, because many right-wingers are convinced it was real. But credible news sources—and a Texas grand jury—have thoroughly debunked the video claims. The pro-choice movement has generally done a good job getting that message out nationally, but apparently most Wyoming legislators ignored the facts.

HB-116 was amended to provide some exceptions that will allow fetal tissue donations to be made for specific research and hospital quality care concerns. Two clinics in Jackson perform a combined total of about 20 abortions annually, and they are the only abortion providers in the entire state. They know what they legally can and can’t do with fetal tissue from abortions—which, under the state’s definition, includes miscarriages—so there is no reason to change their procedures.

A law forces doctors to provide anti-abortion info, but doesn’t penalize them if they don’t

The other bill that passed and was also signed into law by Gov. Matt Mead, HB-182, is problematic and unnecessary. It requires that before a woman has an abortion, a doctor must tell her about other options and the opportunity to have an ultrasound of the “unborn child” and “hear the heartbeat of the unborn child.” (Of course the correct term, because no one is legally a child until birth, is “fetus.”)

The bill was sponsored by Rep. Chuck Gray, a freshman GOP legislator from Casper. Unlike several other states that have passed laws making it mandatory for pregnant women to have an ultrasound, under Wyoming’s new law the woman can decline to see it—it’s only mandatory that the doctor offer.

And thanks to an amendment that stripped from the bill a requirement that a patient sign a document saying she’s received the requisite information, there is no penalty for doctors who do not notify patients of this service. Since there is no written record that such a conversation took place, there is no enforcement provision and no penalty.

Sheila Bush, executive director of the Wyoming Medical Society, said another successful amendment to HB-182 removed a required 24-hour waiting period after a woman seeking an abortion talked to a physician about her other options.

“Before and during the session we heard comments like, ‘Oh, these bills never go anywhere,’“ Breitweiser said. “Well, in the current climate and current Legislature, these bills go onto the law books and have very real consequences for women, families and doctors. We must do everything in our power to stop this from happening.”

Several factors likely contributed to the passage of both anti-abortion bills. There are more social conservatives in the Legislature than in past sessions, and fewer women. Two female Republican freshmen legislators from Cheyenne, Sens. Affie Ellis and Tara Nethercott, are pro-life and voted for the two bills.

Then there’s Sen. Leland Christensen (R-Alta), who dramatically killed a pro-life ultrasound bill in 2011 by breaking a tie with his no vote. That action earned him a sharp rebuke last summer from a national anti-abortion group, the Susan B. Anthony List. The organization endorsed his GOP primary opponent for the U.S. House, Liz Cheney, the eventual winner of the general election.

Christensen said he voted against the 2011 ultrasound bill because “the government has no part in patient-doctor relationships.” But he had no problem changing his stance and voting for this year’s version of the bill after taking so much heat six years ago. Political wonks suspect Christensen might be making a run for statewide office after his current term ends.

Anti-abortion bills also had strong backing from “pro-life” advocates who showed up en masse at the House Judiciary Committee hearing on HBs 116 and 182. The five-hour event drew a larger number of supporters than opponents. Better Wyoming’s unofficial tally of those who testified on the bills was 70 people for and 31 people against.

The other two abortion bills introduced this year died. HB-132, “Reporting of abortions,” was shelved by the House Judicial Committee in favor of the similar HB-250, which the panel approved 6 – 3 and the House passed, 43 – 15. HB-250 would have imposed fines and jail time on doctors who did not file a report with the state for every abortion performed. It also prohibited the purchase or sale of fetal or embryonic organs or parts for research.

But the bill was later killed when the Senate Labor, Health and Social Services Committee chairman, Sen. Charles Scott (R-Casper), refused to schedule a hearing on it.

In response, Senate President Eli Bebout (R-Riverton), who supported all of the abortion-related bills, made sure the final two made it to the Senate floor for debate. Instead of the Senate Labor, Health and Social Services Committee, where the bills belonged, Bebout assigned HB-116 and HB-182 to the all-male Senate Agriculture Committee, enraging opponents who said the bizarre move was symbolic of how the legislative leadership treats women like animals. It also virtually assured passage of both bills by the conservative committee, which approved them on 4 – 1 votes.

At the Senate committee hearing, opponents of both bills significantly outnumbered supporters this time. Agriculture Committee members Larry Hicks and Curt Meier seemed to relish hassling pro-choice women about their positions. They had no negative questions at all, though, for supporters of the two bills who testified.

Wendy Volk of Cheyenne pointed out to the committee that the legislation didn’t even include a provision that covers women who are the victims of rape.

“Mrs. Volk, the purpose of this hearing is not for people to get up and question the sponsors about other statutes,” Hicks said sharply. “The purpose is to allow people to travel across the state to speak specifically on the legislation before us. … We’re not here to debate what is or isn’t in the statutes.”

A day before the two bills were passed by the Legislature, Volk said in an interview that they “pertain to a very private and personal matter between a woman and her medical professional. I believe in the right to privacy. The government has no business in the private health-care discussions between individuals and their health-care professionals.”

Following the session, Breitweiser wrote a letter to NARAL Pro-Choice Wyoming members encouraging them to continue fighting for reproductive rights even if they are disappointed about the two new anti-abortion laws.

“During the 2016 election season we heard comments like, ‘I’m a pro-choice Republican, but I have to vote for these legislative candidates because of other issues,’“ Breitweiser wrote in an email. “Well, please consider recruiting moderate candidates for 2018, true conservatives who believe in small-’g’ government and will vote against these mean-spirited, anti-choice bills.”

SESSION RECAP: For gay rights in Wyoming, nothing got better, but nothing got...

INTERIM DISPATCH: “Recalibration” committee will have to do more than recalibrate...
Scroll to top
Share this ArticleLike this article? Email it to a friend!
Email sent!