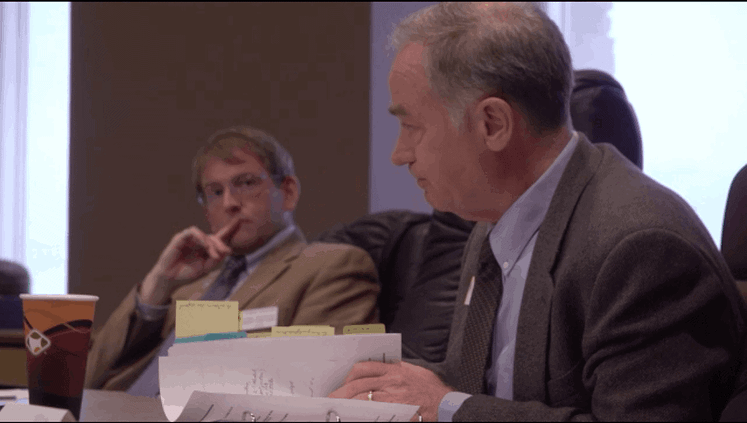 “Recalibration.” It was the one-word answer most Republican legislators gave during the recent session when asked how they plan to solve an anticipated $400 million shortfall in Wyoming education funding through 2020.

The idea behind “recalibration” is that the state will be able to tinker enough with its funding streams that—pulling a little bit from here, a little from there—they will be able to cobble together enough money to adequately fund education. But, of course, it’s not just education that faces a budget crisis—the state as a whole is broke, so it’s hard to see where that money will come from.

On Monday, halfway through the initial six-hour meeting of the Select Committee on School Finance Recalibration in Casper, the speaker of the House asked an unusually blunt question: “Why are we here?”

“Are we trying to save $200 million through a recalibration effort? Not going to happen,” declared Rep. Steve Harshman (R-Casper). He’s one of the few Republicans who hasn’t been preaching that “recalibration” is the panacea for public school funding in Wyoming.

But it clearly still is for Harshman’s counterpart, Senate President Eli Bebout (R-Riverton), who as chairman of the Legislative Management Council sent a message to the 10 members of the select committee via conference call.

“When we look at the overall cost of education, what we have now simply isn’t working when we spend the amount of money we’re spending and we don’t perform any better than we’ve been performing,” Bebout said. “We have to ask ourselves why are we spending so much money on the product we’re getting at the end of the day?”

He said the Revenue Committee has been asked to look at the revenue-generating side of the issue and the Education Committee will recommend responsible cuts to make in delivering the educational “basket of goods”—things like reading, writing, art, etc., that schools by law have to provide kids—“more efficient.” Bebout said it’s up to the recalibration committee to put it all together and recommend a better funding model for schools.

One of the essential ways to do that, he added, is “to see what other people are spending on education [per student] relative to Wyoming, and we’re way out of line.”

Bebout’s message was clear: Their collective mission isn’t how to improve our educational system; it’s to cut costs.

Sen. Chris Rothfuss (D-Laramie) immediately took issue with the Senate president’s questionable assertion that Wyoming isn’t getting good results for the amount it’s spending on education. “Based on my understanding, we’ve invested in the state of Wyoming’s education, we’ve invested heavily, we’ve performed well, and we’ve performed relatively well in line with some high expectations,” he said.

Rothfuss pointedly said that the committee needs “to bring evidence and data so that we understand what we’re doing relative to other states in terms of spending so that we look at it as data analysts instead of just picking and choosing pieces of data that fits a narrative.”

Harshman said he thinks Wyoming has made “a tremendous investment in education and we’ve gotten a lot of great things done in accountability, so I’m sitting here still wondering why we’re doing this.”

“If I was going to pick recalibration I think I would pick two things we’ve never calibrated: special education and transportation, which is about 20 percent of the education dollars we spend,” Harshman said. “We could chip away at some of that.”

One of the main points of Monday’s meeting was to finalize a Request for Proposals (RFP) that would be the official public call for expert consultants to come in and advise the committee on its “recalibration” process.

But Harshman, sounding a theme that many committee members expressed throughout the meeting, said he doesn’t think it’s necessary “to take a half-million in precious school finance dollars” and spend them on outside consultants.

“I just think we can figure this thing out ourselves,” the House speaker said. “If we need to save another $50 million, I think we’ve got the wherewithal to figure this out probably right here in this room… Would anybody like it? Probably not. But for some guy to come in and tell us how much it costs for computers in Los Angeles, I don’t think I’m going to sit through all that, frankly.”

Rothfuss noted education funding recalibration was done just a few years ago. “I just can’t see a dramatically different set of facts and information coming from the next [outside consultant] we hire that justifies it, when we have the expertise in this state,” he said.

Rep. Albert Sommers (R-Pinedale), co-chairman of the select committee, said he likes the idea of using local resources to develop a school funding model. He also added that he thinks it’s “inappropriate” to go into the recalibration effort with the idea that the “basket of goods” is going to be changed to reduce costs.

But Sen. David Kinskey (R-Sheridan) argued that out-of-state consultants could help Wyoming explore the full range of funding models available. He agreed with Bebout that Wyoming students aren’t performing well enough for the state to justify the level of funding it provides public schools, repeatedly bringing up Wyoming’s 8th grade math scores, which are slightly lower than Utah’s. Kinskey also said he favors changing the “basket of goods,” giving the example that small school districts shouldn’t have to teach students art.

Sen. Ray Peterson (R-Cowley) turned the committee’s attention back to answering Harshman’s “why are we here?” question.

“If we believe for a minute that we are in good shape with where we’re at with school finance … then I guess we are wasting our time,” he said. “I feel we are not in a good spot. It’s certainly unsustainable. Recalibration was going to be the vehicle to get something better. We need to do something to convince the citizens that we’re looking out for them as well.”

“So this is why we’re here,” he said. “I think [recalibration] will be a fair vehicle, it will involve the public, it will involve the school districts. We’ll put it all out on the table and we’ll get to where we need to be. We have to diversify our revenue base and revenue. But I don’t feel comfortable having to come up with an additional $400 million in taxes when we have these kinds of expenditures in schools. What do you think the response is going to be?”

Ultimately the select committee decided to send out a request for proposals from consultants, with the idea that firms don’t have to submit a bid for the entire recalibration project but can do it piece-by-piece. A majority of members, though, still seemed to favor the idea of allowing Wyoming educational experts to produce their own education funding models for the committee’s consideration—what Rep. Bob Nicholas (R-Cheyenne) called a “homegrown” solution.

No matter where it comes from, a newly recalibrated school funding formula will have to be found constitutional by the Wyoming Supreme Court. In its landmark 1995 “Campbell” decision, the state’s high court ruled that each child deserves the same quality education, no matter their respective districts’ physical size or their resources.

The very real possibility that no matter what the Legislature does will land them back in court defending their funding system looms large over the recalibration committee. Last week the Campbell County School Board in Gillette passed a resolution allowing the district to sue the state because of the $34.5 million the Legislature cut from education in March.

Donna Little-Kaumo, superintendent of Sweetwater County School District No. 2, said last week that her board is one of 12 members of a coalition considering nearly identical resolutions. On Monday, she told the select committee that her district is still assessing the impact of the cuts, but it has already determined it will have to lay-off at least three employees. She said reductions to funding for instructional materials like textbooks will hurt her district.

Harshman recalled that when he first became a legislator, Wyoming was rated 48th for teacher salaries. After making a huge investment in education, he said, the state climbed to the top 10. Now, the state’s ranking is falling as other states have caught up in paying teachers.

“I think the way to get to this, we’ve got to say, ‘How much do we pay our teachers?’ That’s what this is about,” Harshman said.

Rothfuss put it a slightly different way: “Wyoming’s goal for education has always been excellence. What happens when the state steps in and says, ‘We can’t afford excellence; we’re going for mediocre’?”

BUDGET RECAP (Part 1): Healthy Babies Cost Too Much
Scroll to top
Share this ArticleLike this article? Email it to a friend!
Email sent!