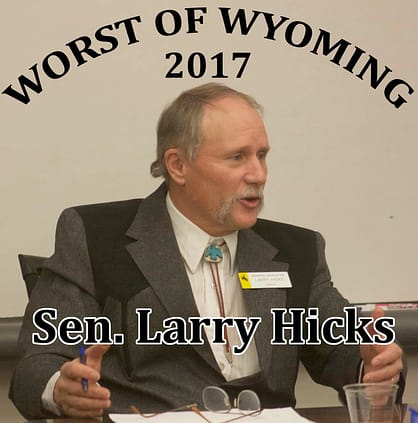 There was stiff competition in the Wyoming State Legislature this session for which lawmakers were the absolute worst, in both the Senate and the House.

By bringing forth bills to sabotage Wyoming’s renewable energy industry, transfer federal public lands to the state, and squash civil rights, Sen. Larry Hicks (R-Baggs) was easily a top contender in the Senate. But it was his special ability to chastise, demean and harass any Wyoming citizen who spoke against him that really put Hicks over the top.

Lots of lawmakers introduced bad bills this session. But when it came to backing up bad bills by belittling members of the public, no one could top Hicks. He seized every opportunity to act like a total dickhead.

This sealed his victory in our competition for 2017’s Worst of Wyoming (Senate).

Women can shut up about abortion!

Hicks’ skills really shined in his treatment of women who dared to testify against two anti-abortion bills he ardently supported. As chairman of the Senate Agriculture Committee, Hicks was in charge of a four-hour public hearing on the far-right legislation.

Jennifer Wilson, who traveled to Cheyenne from Lander to testify, pointed out that both bills described a fetus as an “unborn child”—language to suggest that a fertilized egg has equal legal footing as a living human, which it does not.

“There’s an implication that a woman doesn’t understand what being pregnant means,” Wilson said, “or what having an abortion means—”

Hicks interrupted and glared at her.

“I have one question,” he snapped. “Do you think we should abolish all the laws that we have in this country that when someone commits homicide against a pregnant woman it’s no longer a violation to also kill whatever terminology you want to apply to it?”

A few minutes later, Hicks dug into Wendy Volk, a Cheyenne realtor who wondered aloud why neither bill had a provision to consider women who became pregnant while being raped or the victims of incest.

“Mrs. Volk, the purpose of this hearing is not for people to get up and question the sponsors about other statutes,” Hicks said. “The purpose is to allow people to travel across the state to speak specifically on the legislation before us. … We’re not here to debate what is or isn’t in the statutes.”

We didn’t come here to bloviate!

Hicks was a key advocate for Senate Joint Resolution 3, the much-discussed (and loudly defeated) Constitutional amendment that would have laid the groundwork for transferring federal public lands to the state.

(Hicks “wrote” a basically unreadable 4,000+ word argument on behalf of land transfer for WyoFile, with a note at the end that admits he copied and pasted most of it from other sources.)

At a November meeting on the amendment, Hick and Senate President Eli Bebout (R-Riverton) took turns arrogantly dismissing folks who testified against the measure, telling them they didn’t understand the issue.

At a December meeting, Hicks and his colleagues informed the 100-plus members of the audience who had arrived to speak in opposition to SJ-3 that, in fact, there would be no testimony allowed about public land transfer, even though that was the amendment’s ultimate aim. Transferring federal public land to the state would result in the state selling vast tracts of public land for private ownership and mineral development.

This meeting, Hicks and co. explained, was only devoted to discussing the wording of the bill and not its content. That announcement had many attendees boiling.

But Hicks did his best to entertain. The highlight came when he cut off Larry Wolfe, a Cheyenne attorney and land transfer opponent who was bawling out the committee. “I think you have, in fact, undermined these people’s confidence in their ability to address the Legislature by limiting this hearing in the way you’ve done,” Wolfe began. “Think about what might happen. A Supreme Court might rule that these lands need to be returned—”

“Now we’re going off and we’re going to bloviate about theories about what’s going to happen,” he told Wolfe sarcastically.  ”That’s not what we’re here to do. If we allow you to do this then we’ve got to allow everyone in this room to do this.”

Several people shouted at Hicks, and one noted that he was the only person “bloviating.”

Make a Nanny State for coal!

Hicks, an unabashed pimp for the coal industry, also sponsored House Bill 71, which would penalize utilities $10 per megawatt hour if they generated any electricity from large-scale wind or solar power projects after 2019.

The negative reaction was swift. A Casper-Star Tribune editorial noted, “The bill amounts to protectionism, and it doesn’t have the best interests of all Wyomingites in mind. … This shortsighted bill could very easily force Wyomingites to pay more for their power.”

Rob Godby, director of the University of Wyoming’s Center for Energy Economics and Public Policy, agreed. “Certainly this will not ensure Wyoming rates are as low as possible–it amounts to an attempted indirect subsidy of traditional sources regardless of the cost of renewables,” the energy expert said.

The Senate Corporations Committee handed Hicks a humiliating defeat when they killed his legislation without even voting on it.

If Hicks has any ability to be embarrassed, he should be for sponsoring his offensive Senate Joint Resolution 4. It proposed an anti-affirmative action amendment so schools and employers could not provide “preferential treatment” in hiring to minorities. [one_third last=”yes” spacing=”yes” center_content=”no” hide_on_mobile=”no” background_color=”” background_image=”” background_repeat=”no-repeat” background_position=”left top” border_position=”all” border_size=”0px” border_color=”” border_style=”solid” padding=”” margin_top=”” margin_bottom=”” animation_type=”0″ animation_direction=”down” animation_speed=”0.1″ class=”tomoveSidebar” id=””][tagline_box backgroundcolor=”” shadow=”no” shadowopacity=”0.7″ border=”1px” bordercolor=”” highlightposition=”top” content_alignment=”left” link=”” linktarget=”_self” modal=”” button_size=”” button_shape=”” button_type=”” buttoncolor=”” button=”” title=”Hicks’ Greatest Hits” description=”” margin_top=”” margin_bottom=”” animation_type=”0″ animation_direction=”down” animation_speed=”0.1″ class=”” id=””]You really had to be there to fully experience the arrogance and ignorance that seethes from this man’s pores, and to grasp the condescension that emanates in every breath that flows from beneath his corny handlebar mustache. But here’s a quick recap of his Top Hits this session:

– Senate President Eli Bebout (R-Riverton) knew the pro-choice chair of the Senate Labor, Health and Social Services Committee would kill any anti-abortion bill assigned to him, so instead he sent a couple bills restricting women’s reproductive rights to the Senate Agriculture Committee, chaired by Hicks. Hicks not only pushed the two bills through with aplomb, he also insulted, badgered, and otherwise disrespected (female) citizens who testified against the measures.

– An ardent supporter of transferring federal public lands to the state—which would result in the state selling public lands—Hicks trash-talked citizens testifying against a proposed amendment to lay the groundwork for land transfer, telling one person to stop “bloviating.”

– Hicks proposed a radical piece of anti-renewable-energy legislation that would have fined utilities $10 per megawatt hour for using wind and solar power. The bill was greeted with a round of face-palms, public outcry, and a middle finger from the Corporations Committee, which killed it without even voting on it.

– In order to address the widespread problem of anti-white discrimination (in a state that’s 93 percent Caucasian), Hicks singlehandedly brought forth a bill that would have protected white folks from such abuses. This time, it was the Senate Committee of the Whole that killed this incoherent disgrace without granting it a vote.

– And, of course, on the rare occasions that good legislation did make its way through the Legislature, Hicks was there to fight it tooth and nail. He spoke passionately against a bill to streamlined the process for nonviolent felons to have their voting rights restored after serving their time, but thankfully his will was not done.[/tagline_box][/one_third][four_fifth last=”yes” spacing=”yes” center_content=”no” hide_on_mobile=”no” background_color=”” background_image=”” background_repeat=”no-repeat” background_position=”left top” border_position=”all” border_size=”0px” border_color=”” border_style=”” padding=”” margin_top=”” margin_bottom=”” animation_type=”” animation_direction=”” animation_speed=”0.1″ class=”” id=””][fusion_text]Yes, Hicks feels it’s necessary to protect Caucasians, the persecuted minority that makes up a mere 92.1 percent of Wyoming’s population. In doing so Hicks proved that he is one of the few state legislators who recognizes how oppressed the white race is in this so-called “Equality State.”

Weirdly, there were some people in Wyoming who thought SJR-4 might not be a good idea.

Sabrina King, director of the Wyoming office of the American Civil Liberties Union, said, “It’s coming from a national anti-civil rights agenda that can really do damage to the progress Wyoming makes through affirmative action programs.”

This time it was the Senate’s Committee of the Whole that killed Hicks’ resolution by not even voting on it.

Although some of his most impassioned speeches on the Senate floor came in defense of removing Wyoming women’s reproductive rights—during which he bizarrely reminded his colleagues that the United States “is a nation established under the laws of God”—he also spoke fervently against a bill that would streamline the process for non-violent felons who have done their time to restore their voting rights.

Hicks lost his fight against House Bill 75, which Gov. Matt Mead signed into law after it passed both chambers. But not without a struggle.

But the bill didn’t in any way make government responsible for restoring a nonviolent felon’s voting rights. The current process makes them fill out a mountain of paperwork, and then wait five years to actually be able to legally cast a ballot. The bill just made the process automatic upon an inmate’s release. A horror of simplicity for Hicks.

So, during the session Hicks tried to punish the renewable energy industry, supported the state taking over management of all federal public land within Wyoming’s borders, voted for an anti-abortion bill based on false information from a video about clinics selling baby parts, sponsored an anti-affirmative action amendment to protect mistreated white people at work, and wanted to keep noviolent felons who have completed their sentences from voting for five years.

It was all in a single session’s work for Larry Hicks, 2017’s Worst of Wyoming.[/fusion_text][/four_fifth] 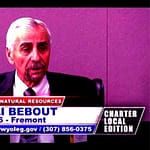 WORST OF WYOMING 2017 (House): Rep. Cheri Steinmetz
Scroll to top
Share this ArticleLike this article? Email it to a friend!
Email sent!