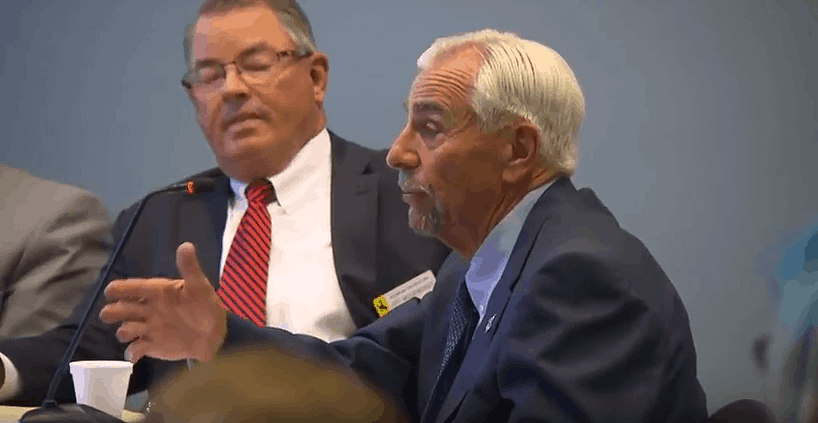 "I don't believe that minerals are going to come back and save the day." —Sen. President Eli Bebout

Sure, Senate President Eli Bebout (R-Riverton) still hems and haws about Wyoming’s “spending problem” and claims there’s a “silent majority” that apparently is fine with gutting public education. But even this staunch oilman admitted at a meeting last week in Riverton, “I do not believe minerals will come back and save the day.”

Bebout was talking about the $400 million education budget shortfall that members of the Select Committee on School Finance Recalibration and the Revenue Committee met jointly to address. Mineral taxes pay for about 60 percent of the cost of educating Wyoming’s children, and industry slumps have drained the state’s coffers.

Meanwhile, House Speaker Steve Harshman (R-Casper) used to act personally affronted when anyone mentioned drawing down a portion of the state’s $1.5 billion “Rainy Day Fund.” The Casper teacher and football coach formerly argued that the state should grow the fund to $3 billion so it could fund two full years of government operations.

But last week, Harshman told the two committees: “I think we’ve got to spend down our [rainy day fund] to 500 million bucks. How are we going to raise people’s taxes [while we] save a billion dollars?”

How indeed? Moderate Republicans and the Legislature’s measly few Democrats believe it’s been “raining” for a long time in Wyoming. But prior to the past two years, conservatives vowed to not allow the account to be raided for any reason.

“I don’t think we’re going to solve it now”

Sen. Cale Case (R-Lander) said he doubts anything will get done about public school financing this year. “Right now I think the Revenue Committee won’t pass any taxes, to be honest,” he told Better Wyoming after the meeting. “I don’t think we’re going to solve it now, it’s going to be a couple of years. What we might do is get a few taxes on the table that are very modest and probably put in some cuts too, and funding might be even direr next year. We’ll have to give it some clear thought. It’s more of a process than a solution.”

Bebout, who isn’t on either the revenue or recalibration committees but sort of edged in and snagged a microphone, urged actual committee members to only consider raising taxes as a last resort.

Bebout claimed raising taxes to fund education would be taking the easy way out. The veteran legislator said he was addressing the committees as both a senator and a businessman who realizes that any tax hikes would hurt Wyoming companies. He implied that the Legislature should never raise taxes, and any time there arose a situation in which the state might need more revenue, we should hold a popular vote.

“If you’re really going to [raise taxes] and we do have this huge amount of deficit out there and we do the recalibration and the [shortfall] amount is $300 million to $400 million a year, that’s substantial,” Bebout said, stating the obvious. “If we get to that point I would ask you to consider, what’s wrong with letting the people decide?”

The land of low taxes

Much of last week’s meeting involved a state economist running down the taxes Wyoming might raise to address the education shortfall.

[Related: Everything you know about Wyoming taxes is wrong]

The state’s 2 cents per gallon tax on beer, which hasn’t been changed since 1935, is the lowest in the nation.

Sen. Ray Peterson (R-Cowley) said even though many of Wyoming’s taxes are low and the minerals industry picks up about three-fourths of the state’s tax burden, an increase in the sales tax “would have a negative effect on every business in Wyoming and the taxpayers.” Except for kids who go to school, of course.

Senate minority leader Chris Rothfuss (D-Laramie) was skeptical of Bebout’s claim that a “silent majority” of people in Wyoming dislike taxes so strongly they would cut school funding.

“It would be fascinating to see if the public preferred cuts to education or would they prefer to see additional taxation—we have no way of measuring that,” he said.

[Related: Recalibration committee will have to do more than ‘recalibrate’ to fix school funding]

Several members of the public who testified at the meeting said education is so vital to the future of Wyoming, they would gladly pay more in taxes if the money was spent on public schools.

Pam Frederick of Lander, a retired principal, and special education teacher, said she now has a 9-year-old granddaughter attending public school. “It’s not her fault we based our education funding on coal,” she said. “There are other revenues.”

“I don’t have a problem paying extra [in taxes] because our children are the most precious resource we have in the state,” she added. “We’re educating our new leaders.”

[Related: It’s not a third grader’s fault in Wyoming that education was funded by coal]

Margie Farias of Lander testified that she doesn’t have any children and is not a teacher, but she is very concerned about the quality of education in Wyoming.

“Frankly, I realize that after listening to all the numbers crunched here today, there is a problem. I don’t believe you can just cut it out of the schools. I think it’s time for the state to realize we need to have an income tax.”

While she knows it’s a contentious issue, Farias told lawmakers, “If it’s your decision to cut all these dollars from the schools, it’s easy for you to do it there in the Legislature. Down on the ground … kids are going to be cut out. Programs are going to be eliminated that shouldn’t be.”

Guess which sparsely populated mineral rich state is getting an income tax&...

Sen. Ray Peterson pretends to care about poor people (when it fits his anti-tax...
Scroll to top
Share this ArticleLike this article? Email it to a friend!
Email sent!