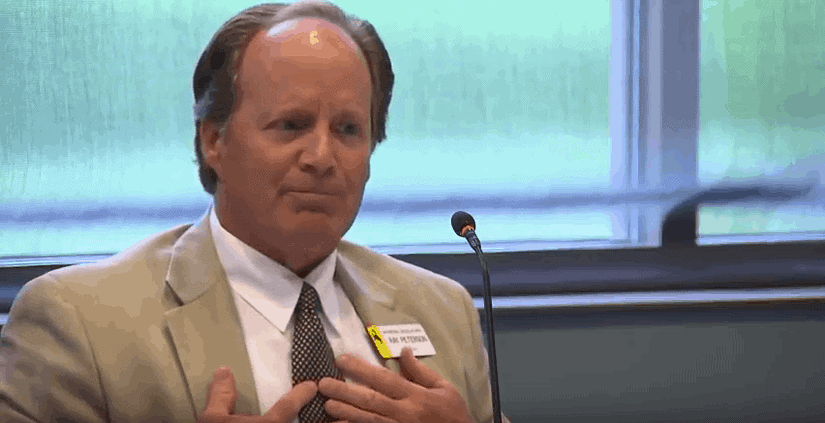 Sen. Peterson attempts a heartfelt look as he describes how people are too cash-strapped with medical bills to support new revenues for education. Peterson voted against expanding Medicaid under the ACA, which would have provided health coverage for 20,000 uninsured Wyomingites and added $120 million annually to the state's coffers.

At a meeting last week in Riverton, the co-chairman of the Joint Revenue Interim Committee recounted an email he received from a woman in Gillette who told him that “‘schools are the backbone of our community’ and ‘schools are number one for economic development’ and yada, yada, yada,” he said. “She was portraying the fact that schools was the economic driver of Campbell County.” 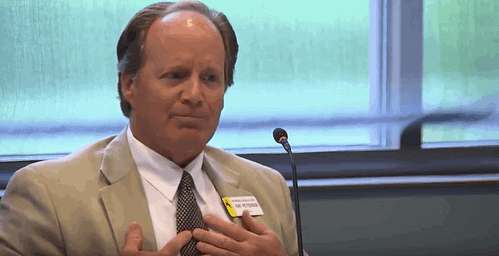 Sen. Peterson attempts a heartfelt look as he describes how people are too cash-strapped with medical bills to support new revenues for education. Peterson voted against expanding Medicaid under the ACA, which would have provided health coverage for 20,000 uninsured Wyomingites and added $120 million annually to the state’s coffers.

[/fusion_text][/two_third][two_third last=”no” spacing=”yes” center_content=”no” hide_on_mobile=”no” background_color=”” background_image=”” background_repeat=”no-repeat” background_position=”left top” border_position=”all” border_size=”0px” border_color=”” border_style=”” padding=”” margin_top=”” margin_bottom=”” animation_type=”” animation_direction=”” animation_speed=”0.1″ class=”” id=””][fusion_text]“Is our kids’ education important? Yes it is,” Peterson said. “Is it the most important thing? Hmm …  I think mom and dad’s jobs are pretty important too, because without those jobs mom and dad leave, they take the kids with them, and our schools become smaller and you receive less money.

“Schools come after people, families come after jobs, and so what’s more important: Mom and Dad’s jobs or a good, quality school?” he said.

[Related: Lawmakers slightly change their tunes on taxes and education]

Peterson, who is also a member of the Select Committee on School Finance Recalibration, said Wyoming has to make more cuts to schools on top of the $55 million the Legislature has slashed from the education budget the past two years. The state faces a $400 million annual budget shortfall in education as a result of decreasing mineral revenues.

“We have to live within our means. We have to do that,” Peterson stressed.

Kevin Mitchell, superintendent of Park County School District #1, reiterated in an interview what one imagines the woman in Gillette was trying to tell Peterson: that quality schools are economic drivers that create jobs for moms and dads.

“Education is economic development. An educated workforce is economic development. That’s what it is,” Mitchell said. “The other piece is, we often talk about our young people leaving. Certainly, if we regress as a state, there’s no way were going to get them back. We’ve got to be able to convince people that this is a quality place to raise your children.”

Peterson enjoys making up stories about people to advance his agenda. At a meeting in April, he illustrated school districts’ wasteful spending by claiming there was a “tutor” in Powell who made $80,000 a year! He saw the figure in a salary list published in the local newspaper.

[Related: ‘Recalibration’ committee will have to do more than recalibrate to fix education funding]

Unsurprisingly, a modicum of investigation revealed that the person wasn’t a tutor at all, but a teaching veteran with an advanced education degree and 22 years experience who oversees an intensive one-on-one program for remedial and advanced students and who is an athletics coach on top of her teaching duties.

But those are mere details! Peterson has no time for them as long as the story supports his argument.

Last week, after disparaging the woman who wrote him from Gillette, Peterson went on to argue that poor people can’t be bothered to support public education in Wyoming. He described an elderly couple on a fixed income who lives near him.

“Their only concern is medical costs and how much my prescriptions cost, and how am I going to make my retirement last another five, six, seven, eight years,” he said. “I can’t very well as a legislator go back to those people and say, ‘By the way, your taxes are going up—significantly—because we just can’t make the cuts on education.’”

Peterson’s lament would sound sincere if it weren’t for the fact that he and his Republican colleagues in the Senate regularly cut public services whenever budget troubles arise. In addition to education, their favorite targets also include people who are poor, elderly, and disabled.

And don’t forget: When the state senate last voted on whether to expand Medicaid to provide health coverage for 20,000 uninsured low-income people in Wyoming (and add $120 million a year to the state’s budget), Peterson voted against it. So why is he suddenly an advocate for people who can’t afford to pay their medical bills or buy their medicine?

“I’m up for reelection in another year,” he reminded the room.

Peterson concluded his monologue by describing parts of a letter he received from a woman whose mother lives in a senior center in Basin. Her concern was that her mom’s Medicaid payments only allowed her $50 a month in spending money.

“This was disposable income that she used for cosmetics, feminine products, things like that,” Peterson said. “And my question, as I was reading this letter, was, ‘Does this person really care about K-12 education?’ It’s not a priority to her, I guarantee you that.”

Nothing Peterson referenced in the letter actually said or even suggested that the woman in question doesn’t value education—except for the fact that she’s poor (and, you know, since she’s a woman, she’s going to blow all her spare cash on makeup and tampons). He simply assumed that she was too desperately impoverished to be concerned with others.

But Peterson’s assumption doesn’t make sense on another level, since public education is the great equalizer—perhaps the single most important resource that low-income people can leverage to improve their economic station. This is besides the fact that, for many low-income parents, school lunch and not having to pay for a daytime babysitter most of the year is critical to their survival.

Whatever Peterson was basing his “guarantee” on remained a mystery.

Poor people in Wyoming might be overtaxed, but rich people certainly aren’t

Of course, there are some poor people in Wyoming who don’t want to pay more taxes to fund education. But here’s the thing: They shouldn’t have to.

Wyoming’s tax structure is grossly regressive, meaning that low- and middle-income workers pay a vastly larger percentage of their income in taxes than rich people. This results mostly from our reliance on sales tax and the lack of an income tax. The lowest 20 percent of earners in Wyoming pay nearly seven times the tax rate as the top one percent—the worst discrepancy of its kind in the nation.

[Related: Everything you know about Wyoming taxes is wrong]

Peterson and his colleagues could easily design taxes to fund education that don’t target the elderly couple across the street from him or the woman in Basin from the letter. But that would mean people more like him and the folks who fund his campaign would have to start coughing up more of their fair share. Why would they want to do that?

If you want to write Sen. Peterson and give him your thoughts, his email is: [email protected][/tagline_box][/one_third]

Lawmakers slightly change their tunes on taxes and education

Can Wyoming Learn From Kansas’ Monumental Tax Mistake?
Scroll to top
Share this ArticleLike this article? Email it to a friend!
Email sent!