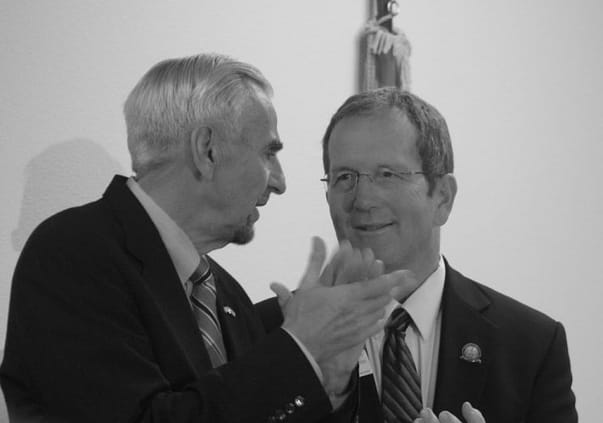 The future of our public schools lies largely in the hands of Wyoming State Senate President Eli Bebout (left) and Speaker of the House Steve Harshman (right), pictured here during the 2017 Legislative session. Bebout favors mindlessly slashing school funding, while Hashman appears to genuinely value education and want to fix our funding system.

The consulting firm hired to tweak Wyoming’s public school funding system in an attempt to address the state’s $250 million education budget shortfall told a legislative committee late last month they could complete their evaluation and make recommendations by December or January.

Rep. Albert Sommers (R-Pinedale), co-chairman of the Select Committee on School Finance Recalibration, told the four-person team from Denver-based Augenblick, Palaich & Associates that the firm needs to have its recommendations finished by November. Those were the orders passed down by the legislature’s powerful Management Council.

The “recalibration” process began in early April, five months ago. It’s taken the “Recalibration” committee this long to select a consulting firm and host a meeting with them. In the next four months, the consultants are expected to:

The future of our public schools lies largely in the hands of Wyoming State Senate President Eli Bebout (left) and Speaker of the House Steve Harshman (right), pictured here during the 2017 Legislative session. Bebout favors mindlessly slashing school funding, while Hashman appears to genuinely value education and want to fix our funding system.

Somehow, all of this is supposed reveal a magic formula to make Wyoming public schools more fiscally efficient.

“I think it is going to be a hurdle for everybody just because it’s a tight timeline,” Rep. Steve Harshman (R-Casper), Speaker of the House, told Wyoming Public Radio.

Ken Decaria of the Wyoming Education Association told the “Recalibration” committee that the work plan “has such a short time frame, I urge you to make sure there’s enough time to have quality input before you go down that road.”

Watching this rush job unfold increases one’s sense that the whole “recalibration” process is a dog and pony show—a ploy meant to give political cover to lawmakers who plan to gut public school funding because they refuse to raise new revenues.

But the Legislature has already cut $55 million from the annual budget. According to a recent survey, 577 public school jobs have already been eliminated in Wyoming as a result, and 44 of the state’s 48 school districts have cut programs.

Lawmakers know that, before they cut more, they’ll have to do a little dance to at least give the appearance they’re exploring alternatives.

The coach and the tyrant

Despite the legislative leaders’ obvious hope that “recalibration” will cut costs, there is no guarantee that the consultants won’t recommend earmarking even more money to public education. Rep. Harshman told the House as the 2017 session closed that, after all is said and done, costs “may even be higher.”

Harshman is a teacher, coach, and WEA member. He appears a voice of reason in the wilderness of Wyoming’s education funding crisis. At the very first “recalibration” meeting, Harshman stated plainly that he had no illusions about the committee’s ability to tweak the education-funding model enough to offset the deficit.

“Why are we even here? Are we trying to save $200 million through a recalibration effort? Not going to happen,” he said.

As the leader of the Wyoming State House of Representatives, it was Harshman’s job to handpick lawmakers to serve on the “Recalibration” committee. Sources in the education community say he seems to have stacked his side with people who genuinely care about education and want to fix the funding problem.

Opposite Harshman in the ranks of Legislative leadership, however, is Senate President Eli Bebout (R-Riverton), who defined his first session in that position by opposing all new revenues, no matter what. He stacked the Senate half of the “Recalibration” committee with anti-tax zealots like Sen. Ray Peterson (R-Cowley), Sen. Dave Kinskey (R-Sheridan), and Sen. Hank Coe (R-Cody).

Bebout, who’s characterized as a tyrant around the Capitol and is likely the most powerful person in the Legislature, does not serve on the “Recalibration” committee. Nevertheless, he shows up to each meeting, either in person or on speakerphone, to remind the committee members that he’s keeping close tabs on them. Every time, he tells them that Wyoming has a “spending problem” and cryptically mentions that he’s got some “ideas” about “class sizes” and the “basket of goods” that he’s going to save for later.

Let us translate: Bebout is going to let the “recalibration” process play out. When it fails to significantly reduce costs, he’s going to try his damnedest to push through legislation to increase class sizes and cut school programs.

Harshman is the only person who might be able to stop him.

OUT OF SIGHT, OUT OF MIND

Not only is the “recalibration” work being done hastily, it’s also taking place outside the public’s sight. Rep. Bob Nicholas (R-Cheyenne) expressed dismay at the most recent committee meeting that no one outside a small group of lobbyists and technocrats seemed to know what was going on. He urged the Legislative Service Office to ramp up its efforts to make people aware of the consultants’ public meetings.

Indeed, members of the public have been conspicuously absent from “recalibration” meetings, considering the committee is basically tasked with determining the future of Wyoming’s public education system.

When two citizens did show up to the most recent meeting in Casper to ask lawmakers to raise new revenues for education, they were rebuffed by committee co-chair Sen. Hank Coe (R-Cody) who announced he would only accept testimony on the specific tasks of the consultants under discussion.

No members of the general public testified.

Should education shoulder the state’s burdens?

During the last Legislative session, the Senate proposed a bill that would cut $91 million from the state’s annual education budget. Characterized as a “bloodbath” by school administrators, it prompted enough outcry that Bebout and his colleagues backed off and negotiated with the House, settling on a $34 million cut, which was in addition to $21 million slashed the year prior.

But the Senate bill from last session indicates how far Bebout is willing to go.

Replying to their critics in a Casper Star-Tribune op-ed last February, Bebout and Coe wrote: “At a time when all other Wyoming state agencies, including the Legislature, face an 11.2 percent top-line reduction, Wyoming’s education system has not seen any meaningful reductions to funding. … Education, too, must shoulder a share of the burden from Wyoming’s reduced revenue.”

The latter passage isn’t true, at least not from a policy standpoint—there’s no requirement in state law that says education must share the burden of budget cuts with other agencies. Bebout and Coe’s statement simply reflects the philosophy of some legislators who don’t think educators should get a “free ride” while other state employees are asked to do more with less.

Of course, as Bebout asks us to shed a tear about the fact that the Legislature faces a 11.2 percent cut, he doesn’t mention the $300 million Capitol renovation project lawmakers approved to give themselves shiny new digs.

The Wyoming State Constitution requires lawmakers to adequately fund public schools, so that all students in the state have access to a quality education. The Wyoming Supreme Court has reiterated this legal truth in several high-profile cases (often called “Campbell cases” after the school district that has served as lead plaintiff). In these cases, the court has repeatedly agreed with school districts that the Legislature wasn’t funding education according to its Constitutional mandate.

Several Wyoming school boards have recently passed resolutions permitting the districts to sue the Legislature if the newest round of cuts goes too far. Talk around the education water cooler indicates that, with Bebout running the show, this is a likely scenario.

So, instead of sensibly reforming Wyoming’s absurd tax structure and figuring out new, stable sources of revenue for education, the Legislature looks like it’s going to waste time and money going through a hasty “recalibration” process.

When that proves inadequate in terms of addressing the $250 million budget shortfall, Bebout will push for cuts that will increase class sizes and cancel public school programs (will it be art? gym? metal shop? we’ll see…).

If the cuts pass, school districts will sue the Legislature, resulting in more wasted taxpayer money and more wasted time. And then we’ll be back at square one—where we are now—with nothing but a sad addition to Wyoming government’s dysfunctional history to show for it.

Wyoming is the best in the United States at educating low-income students. ... 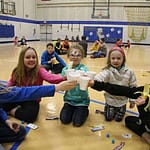