Like a group of mopey pre-teens ordered to clean their messy rooms, the Wyoming State Legislature’s Revenue Committee met earlier this month in Thermopolis under orders to do what its members apparently hate most: figure out new forms of revenue to fund Wyoming public schools and ease the radical boom-and-bust cycle that afflicts the state.

And just like a group of mopey pre-teens, the committee as a whole did a crappy, half-hearted job—the legislative equivalent of cramming everything under their bed or into their closet. They passed motions to write a handful of drafts bills that, if approved by the full Legislature, would increase the tax burden on working- and middle-class Wyomingites while essentially sparing the richest residents in our state, who already pay the absolute lowest tax rates in America.[/fusion_text][/one_third][two_third last=”yes” spacing=”yes” center_content=”no” hide_on_mobile=”no” background_color=”” background_image=”” background_repeat=”no-repeat” background_position=”left top” border_position=”all” border_size=”0px” border_color=”” border_style=”” padding=”” margin_top=”” margin_bottom=”” animation_type=”” animation_direction=”” animation_speed=”0.1″ class=”” id=””][fusion_text] 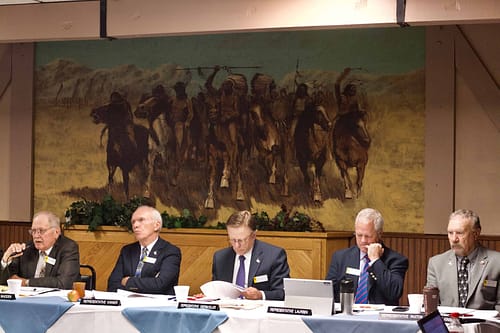 Revenue Co-chairman Sen. Ray Peterson (R-Cowley) told the committee it should try to move all of the tax proposals they considered forward, and urged them to “hold your nose and vote aye” to create draft bills for further consideration. With two exceptions, the members did just that, even if they disagreed about a particular tax.

After one vote, where the “ayes” sounded more like vague sighs and reluctant mumbles, Peterson joked that the committee “shouldn’t be so enthusiastic.”

But, of course, Wyoming’s fiscal woes are no joke—not to anyone who cares about developing a diversified economy and educated workforce, maintaining a quality university, driving down well-paved roads and having the fire department show up when their house is burning down, or who receives any sort of public assistance, from mental health services to Meals On Wheels.

Department of Revenue staffers told the committee that, for instance, if they raise property taxes and both increase and expand the state’s sales tax, it would generate an estimated $230 million. Throw in proposed tax increases on beer, wine and spirits, and the state would be closing in on the $250 million annual education budget shortfall that we face as a result of slumped mineral tax revenues.

A variety of lobbyists and specialists weighed in during the two-day meeting, but all of the hours of testimony and deliberations may have been a gigantic waste of time due to one man who briefly offered his opinions.

Senate President, Sen. Eli Bebout (R-Riverton) wields a huge amount of power over the legislative agenda. He can take any bill on any subject, stick it in his desk drawer during the session, and it’s like the proposed law never existed—he did this several times last session. If Bebout doesn’t want to take all of the blame, he can assign any bill to a committee that he knows will definitely kill it.

Bebout hates almost all tax increases. Loathes them, in fact. He’s said repeatedly that none should even be considered until the Legislature cuts even more from education—on top of the $55 million they’ve already slashed over the past two years. Recently, Bebout told the Casper Star-Tribune that he would like to see an additional $200 million cut.

One step forward, two steps back

Bebout attends every Revenue Committee and School Finance Recalibration Committee meeting either by phone or in person, even though he serves on neither committee. Just like always, he repeated to lawmakers in Thermopolis the old conservative mantra: “We don’t have a revenue problem, we have a spending problem.” This despite the demonstrable revenue drop over the past several years.

Almost as an aside, Bebout did mention a couple types of taxes he would support: a statewide lodging tax, which would be paid almost entirely by tourists; and a corporate income tax on businesses that gross more than $25 million a year, which would target big box stores like Wal-Mart.

The Revenue Committee considered a number of proposed new taxes and tax increases during its meeting in Thermopolis. Aside from tabling a cigarette tax hike and killing a wind generation tax increase, they voted to create draft bills for all other proposals to look at during the committee’s meeting on Sept. 12 – 13 in Buffalo.

The draft bills include:

— A half-cent increase in the state sales tax for four years. The revenue would be earmarked for school maintenance and capital construction. Officials estimated the tax would bring in about $70 million annually.

— An expansion of the sales tax to include services that are now exempted, including corporate accounting and legal services. If all of the services on the list were taxed, Noble said about $80 million could be generated per year. But every time legislators tried to lift tax exemptions in past sessions, lobbyists lined up in droves to tell them why their exemption should be kept.

— Beer and liquor taxes would be increased by a penny per “bottle,” a unit legislative staffers found kind of weird and confusing but will deal with nevertheless. The money collected from the tax increase would be used to fund substance abuse programs, which were cut earlier this year.

— Another booze bill would increase the markup on liquor sold by the state from 17.6 percent to 20.6 percent. The state operates as a wholesaler of liquor to bars and stores.

— Rep. Jerry Obermuller (R-Casper) proposed establishing a gross receipts tax in Wyoming. The idea met sharp resistance. An expert from the conservative Tax Foundation described how gross receipts taxes hit every step of a production process (from production to shipping to wholesale to retail) but the cost burden eventually falls on the consumer. It’s a radically regressive tax.

However, Obermueller said his whole point of proposing the idea is to tax out-of-state companies who do business in Wyoming but don’t pay taxes here on their profits. Despite the Tax Foundation official describing it as “the worst tax option” a state could consider—only three states really use it—the committee voted to have staffers draft a measure to identify how much of a company’s income came from Wyoming by filing that newly required information with the secretary of state.

“To me it should be on the table,” Bebout said. Of course, the oil and gas boss from Fremont County never has problems putting food on his own table.

Being the loyal energy industry representative he is, Bebout also said if the Legislature raises property taxes it should decrease the percentage at which minerals are valued for severance and ad valorem taxes, from 100 percent to 90 percent. He explained that would make the property tax hike “net neutral” for the mineral industry.

Of course, this would also make it a tax increase that doesn’t generate revenue for the state.

Bebout has already decided he’s against both a personal and corporate income tax, so that probably won’t be happening while he’s Senate president. But the topic was not completely omitted from discussion in Thermopolis.

During testimony by Department of Revenue head Dan Noble, Rep. Cathy Connolly (D-Laramie) stopped the state economist and pressed him to go into detail about income tax.

Noble was giving the committee a history lesson about Tax Reform 2000, which was the last time anyone took an earnest look at fixing Wyoming’s tax structure. During testimony, he had attempted to gloss over the fact that the Tax Reform 2000 committee’s number one recommendation was establishing personal and corporate income taxes in Wyoming. The TRK group argued that the income taxes would stabilize and bring equity to Wyoming’s tax structure.

Noble simply mentioned that income taxes were “unpopular” among legislators at the time, and moved on.

But Connolly asked him to go back and talk a bit more about income tax, and to particularly address the state Constitutional amendment that would allow Wyoming residents to write off their sales and property tax in the event of an income tax being established.

Noble, who had been a young Department of Revenue staffer in 2000 assigned to crunch numbers for income tax models, admitted that, according to his calculations, the amendment made it so people who made less than $30,000 a year wouldn’t have seen any tax increase at all as a result of an income tax. In today’s dollars, that would be about $45,000 a year.

“It actually acted like what they refer to as a progressive tax,” Noble said. A “progressive” tax is one that affects wealthy people more than working- and middle-class people.

Maybe that’s why legislators, who are mostly rich themselves, didn’t like it then, and don’t today.

Smoke ’em if ya got ’em: Tobacco lobbyists bamboozle legislators and score...
Scroll to top
Share this ArticleLike this article? Email it to a friend!
Email sent!