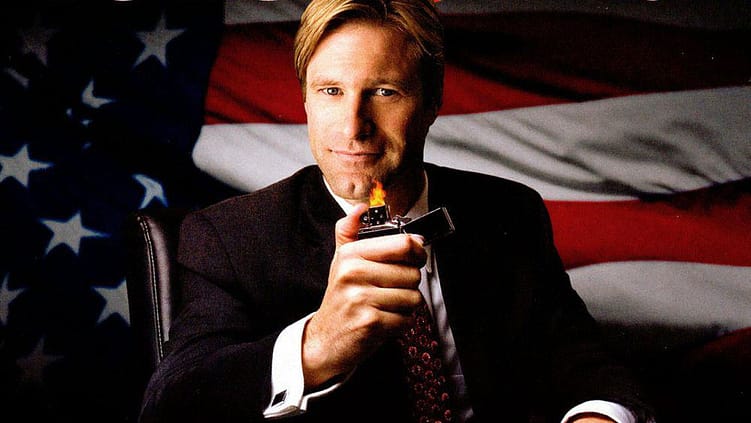 Nick Naylor, the fictional tobacco lobbyist from the movie "Thank You For Smoking," which examines the American culture of political spin that was on full display in Thermopolis. None of the lobbyists in Wyoming, however, were nearly as handsome or dashing as Aaron Eckhart, who plays Naylor.

A group of men comes together in a parking lot to slap each other on the back and loudly proclaim victory.

They’re not athletes after a football game. They’re lobbyists working for the tobacco industry—and they’re amped up and giddy outside the Days Inn in Thermopolis, where moments before each had testified before the state’s Joint Revenue Interim Committee about why it would be bad for Wyoming to raise its tax rate on cigarettes. They don’t realize Better Wyoming is standing there watching—not that they would care if they did.[/fusion_text][/one_third][two_third last=”yes” spacing=”yes” center_content=”no” hide_on_mobile=”no” background_color=”” background_image=”” background_repeat=”no-repeat” background_position=”left top” border_position=”all” border_size=”0px” border_color=”” border_style=”” padding=”” margin_top=”” margin_bottom=”” animation_type=”” animation_direction=”” animation_speed=”0.1″ class=”” id=””][fusion_text] 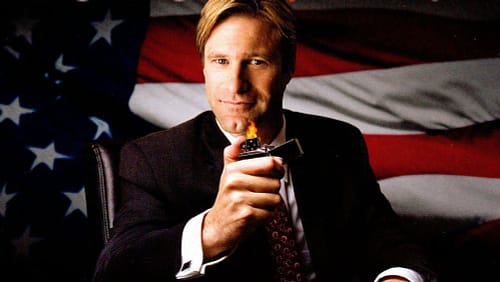 Nick Naylor, the fictional tobacco lobbyist from “Thank You For Smoking,” a movie that examines the culture of political spin that was on full display in Thermopolis. None of the lobbyists in Wyoming, however, were nearly as handsome or dashing as Aaron Eckhart, who plays Naylor.

“We had a game plan and we stuck to it.”

Mike Moser, lobbyist extraordinaire for the Wyoming Liquor Association—who also argues on behalf of cigarettes­—shakes both their hands in congratulations. Then he hops in his Nissan 370z convertible and zips away.

Their win was significant. The Joint Revenue Interim Committee had spent two days deliberating different ways to raise new revenues to offset the state’s massive budget shortfall. The committee had voted to pass everything that had come before it up until this point, giving the go-ahead for draft bills to be composed about increasing sales tax, a new gross receipts tax, a property tax hike, and raising booze taxes.

But by the time the tobacco lobbyists were finished, the lawmakers appeared flummoxed and uncertain. A combination of fast facts, slick doubletalk, tried-and-true anti-tax arguments, and bizarre references to an obscure dispute over tobacco taxes on the Wind River Indian Reservation was enough to make the committee members throw up their hands and concede that they were not prepared to move forth with a draft bill to increase tobacco taxes in Wyoming.

Style, not substance, wins the day

Wyoming’s cigarette tax rate is 60 cents per pack, the 42nd lowest rate in the nation. It hasn’t been increased for 14 years, when it was only 12 cents per pack. The national average tax is $1.69 per pack.

Rep. Dan Furphy (R-Laramie) pointed out that a 2010 University of Wyoming study found that cigarette-related health problems cost the state roughly $240 million a year. But by the time he said this, however, lawmakers were already in the lobbyists’ palms, and his comments were basically ignored.[/fusion_text][/two_third][one_third last=”yes” spacing=”yes” center_content=”no” hide_on_mobile=”no” background_color=”” background_image=”” background_repeat=”no-repeat” background_position=”left top” border_position=”all” border_size=”0px” border_color=”” border_style=”solid” padding=”” margin_top=”” margin_bottom=”” animation_type=”0″ animation_direction=”down” animation_speed=”0.1″ class=”tomoveSidebar” id=””][tagline_box backgroundcolor=”” shadow=”no” shadowopacity=”0.7″ border=”1px” bordercolor=”” highlightposition=”top” content_alignment=”left” link=”” linktarget=”_self” modal=”” button_size=”” button_shape=”” button_type=”” buttoncolor=”” button=”” title=”The squeaky wheel gets the grease” description=”” margin_top=”” margin_bottom=”” animation_type=”0″ animation_direction=”down” animation_speed=”0.1″ class=”” id=””]According to a 2016 University of Wyoming poll, nearly 80 percent of the state’s residents favor increasing taxes on tobacco products. But average residents don’t show up to legislative committee meetings on weekday mornings in Thermopolis to tell their elected representatives what they want. Instead, the meetings are filled with lobbyist after lobbyist, who work to convince lawmakers that what’s best for the entity that writes their paycheck is best for the state. Lawmakers, with no one to tell them otherwise and with little incentive to find out for themselves, generally do the lobbyists’ bidding.[/tagline_box][/one_third][four_fifth last=”yes” spacing=”yes” center_content=”no” hide_on_mobile=”no” background_color=”” background_image=”” background_repeat=”no-repeat” background_position=”left top” border_position=”all” border_size=”0px” border_color=”” border_style=”” padding=”” margin_top=”” margin_bottom=”” animation_type=”” animation_direction=”” animation_speed=”0.1″ class=”” id=””][fusion_text]What winning arguments did the tobacco lobbyists make that were so convincing? In review, the arguments themselves were weak. It was pure style and delivery that won the lobbyists the day.

Dave Pickard of Altria Client Services, which includes Philip Morris and USA Smokeless Tobacco, said Altria believes its customers are already taxed at a high rate in Wyoming. Wow! What more did legislators need to know to kill the idea on the spot? It’s amazing they even took more testimony after that declaration from a tobacco company.

“It really needs to be well thought-out if you’re going to go down this road of such a sharp increase so we can make sure we do not have unintended consequences,” he said. Pickard didn’t specify those “unintended consequences” and no one on the committee asked him what he was talking about.

His other vague argument against raising the tax was that tobacco revenues are not stable and the state cannot rely on them to pay for programs it starts. Once again he didn’t identify these programs and the panel didn’t bother to question him.

Laurie Urbigkit, representing Reynolds Tobacco, said the company opposes any tax increases on its products and particularly objects to raising taxes on smokeless products like chew. She pointed to new FDA research announced last month that said while nicotine makes people addicted to smoking, it’s the other chemical compounds in tobacco and the smoke created when it burns that actually kill people.

Increasing taxes on both combustible and non-combustible tobacco “would leave little incentive to lead people” to healthier smokeless tobacco products, Urbigkit said. But she failed to address other established health concerns about chew, such as mouth cancer. Again, nobody brought up the issue.

Moser said his clients are “vehemently opposed” to a cigarette tax increase and maintained that higher taxes would hurt Wyoming’s ability to compete with other states like North Dakota, which has a 44 cent per pack tax. He didn’t explain why the fight for customers between two non-contiguous states is so competitive. He also didn’t address the fact that even if Wyoming raised its tax a full dollar per pack, which is unlikely, it would still be 10 cents per pack below the tax levied by two of our border states, Montana and Utah.

Readers should understand that Moser is one of the best in the business, who uses a blend of deep research, logical trickery, and self-deprecating humor to sway his audience—your elected representatives—to do his bidding. He’s been holding back increases to liquor taxes successfully for his entire career, and has had much the same success with tobacco. He’s set to retire soon, and he’s working hard to make sure he goes out with his legacy intact.

Mark Larson’s testimony on behalf of the Wyoming Petroleum Marketers Association, which represents gas stations and convenience stores, was particularly befuddling, as he raised several points that didn’t seem connected in any way. He noted that a proposed 30-cent tax increase to 90 cents per pack that failed in the Legislature earlier this year was supposed to adjust for inflation, since the tax was last raised in 2003. If we try to match other states’ inflation rate, Larson claimed, Wyoming’s competition will find a way to keep their taxes lower.

Because 85 percent of convenience store customers use credit cards to buy cigarettes, Larson said, retailers pay an extra 3-to-5 cents per pack on the transaction, all so they can collect tax revenue for the state. His final point was that with the relatively new marketing on e-cigarettes, “the chairs on the deck are shifting.” He didn’t explain how either of his observations related to raising cigarette taxes in Wyoming.

The final leap down the rabbit hole was made by Grant Link, a tobacco wholesaler in Riverton, who said he was asked to testify at the Revenue Committee’s hearing by Senate President Eli Bebout (R-Riverton). Bebout led the opposition to the 30-cent cigarette tax increase that the Senate killed during the 2017 session after the House had passed it. This was just one of several revenue-generating proposals defeated under Bebout’s leadership.

Link painstakingly laid out a list of problems he has selling cigarettes to retailers on the reservation. When Sen. Cale Case (R-Lander) asked what the Legislature could do to resolve the reservation problem so he made more profit—which seemed to be Link’s major complaint—he said he wasn’t interested in making more money. When Case asked what he wanted the committee to do, the wholesaler said to just keep everything the same as it is now.

Even the American Cancer Society of Wyoming didn’t speak in favor of a cigarette tax increase, albeit for a different reason than the industry’s generally incoherent opposition.

Jason Mincer of the ACS said the organization’s national policy is to not support a tax hike under $1 per pack. “If we don’t raise the price considerably, people aren’t going to quit,” he said. “We need people to think about that purchase. With a significant increase, kids will never start [smoking].”

Sen. Dave Kinskey (R-Sheridan), who an hour earlier argued that Wyoming needs to devote more money to substance abuse programs, asked Mincer what smoking cessation programs have a track record of success. “I worry about this money for smoking cessation going to creating a government bureaucracy that may or may not work,” he said.

Mincer said Wyoming adults who want to quit smoking have access to a program that provides them the anti-smoking medication Chantix free for three months. Just under 50 percent are still smoke-free after six months, he said, which he touted as unusually high.

“I move that we table this for now,” said Kinskey after the lobbyists were finished. “We’ve had more information presented to us today than ever before.”

The whole presentation was, indeed, hard to digest, but it wouldn’t have been if the Revenue Committee had kept its focus on how much additional money a cigarette tax increase would bring to the state.

The Department of Revenue estimated a 50-cent increase would generate an additional $14.3 million annually. A $1 increase per pack would result in $26.6 million more for the state. A snuff increase of 50 cents per can would bring in almost another $4 million.

Rep. Cathy Connolly (D-Laramie) said she hoped increasing cigarette taxes might be brought up sometime again in the future. But the committee agreed with Kinskey. There would be no movement on increasing Wyoming’s tobacco taxes.

The tobacco lobbyists were beside themselves with the victory.