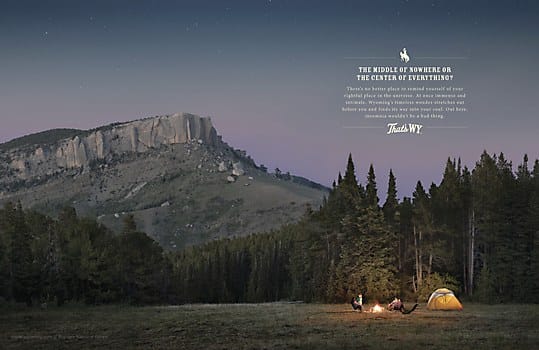 A tourism tax would help pay for ads like these in national publications.

No one in Wyoming would ever say that, according to Republican state leaders like Senate President Eli Bebout (R-Riverton). He swears people only want legislators to cut, cut, cut public services—all the way to the bone and beyond.

Do people mind paying more in taxes if it’s for something that’s priceless, like a good education for every child in Wyoming? Actually, they’ve said they are willing to do exactly that. A Wyoming Education Association-commissioned poll—which was conducted by a top national Republican polling firm that contacted mostly Republicans—shows 78 percent of Wyomingites favor paying higher taxes so education funding will not have to be cut.

But Bebout and House Speaker Steve Harshman (R-Casper) have their heads buried in the sand. “I don’t think things like these [polls] sway anybody,” Harshman said. Well, that’s true, if legislative leaders refuse to listen to their constituents—and as long as Bebout takes the brain-dead stance that the state can cut a whopping $200 million from education funding and not affect the quality of Wyoming’s public schools.

But here’s something these remarkably shortsighted men can’t pretend hasn’t happened: The travel and tourism industry, the second largest industry in the state, is on record supporting paying higher taxes.

In fact, it’s their idea.

An industry willing to pay for itself

“Tax us,” Jeff Golightly, vice president of Gardner Capital Management, told the Joint Revenue Interim Committee at a meeting in Buffalo last week. “We’re willing to pay because we understand the value of a [tourism] tax.”

Golightly knows that taxes pay for tourism campaigns that draw people to attractions like the Snow King Mountain Resort, which he manages in Jackson. He sees taxes as an investment in the overall industry—something that raises all boats, so to speak.

Last summer, the Wyoming Office of Tourism and a group of travel industry lobbyists traveled around the state asking businesses whether they would be willing to see increased taxes specifically for tourism so they could quit relying on the state’s general fund—and the discretion of Legislators—for money to grow their industry.

It turns out about 98 percent of them did, according to Chris Brown, director of the Wyoming Lodging and Restaurant Association. They support a new 1 percent tourism tax on most travel and leisure sales in the state.

The tourism industry has volunteered to live up to the allegedly cherished Wyoming value of self-sufficiency. With this new tax, no longer will the tourism industry rely on mineral severance taxes to help it prosper. The industry would be able to spend whatever it could raise itself. Perhaps other business leaders and lawmakers in the state will take note.

Relieving the state of a $25 million burden

If the Legislature approves the new tax, it would be a win-win for the state and the tourism industry. The state now takes about $25 million each biennium from the general fund to operate the Wyoming Office of Tourism. The industry and state officials estimate the 1 percent tourism tax would generate approximately the same amount of money.

Since it would no longer have to fund the Office of Tourism, the state would then have an additional $25 million to be used for other purposes, such as education. Wyoming’s school budget shortfall is about $250 million a year, and the state can use every innovative idea it can find to work on solving its budget problems.

The tourism industry is also eager to raise its own revenue because doing so would free the Office of Tourism from the booms and busts inherent in the current tax structure, which is overwhelmingly dependent on minerals. The Office of Tourism saw a 13.5 percent reduction in its budget in the last biennium because of the current mineral slump that’s afflicting state departments across the board.

“We want Wyoming to focus on a long-term sustained source of revenue,” Brown said. “Legislators told us we were lucky to be cut only 13.5 percent.  They asked us, ‘when is tourism industry going to find a way to fund itself?’”

Hospitality and leisure businesses favor the 1 percent tax because it beats what the Revenue Committee was considering—a 3 percent lodging tax. The lodging tax would raise about the same amount of money as a general tourism tax, but both the industry and counties are worried the 3 percent tax could hurt efforts to pass local lodging taxes, which are voted on every four years. Higher prices could also deter customers.

The 3 percent proposal would primarily impact the lodging industry, Brown said, while a 1 percent increase could be spread more fairly among all segments of the tourism industry.

Unfortunately, Brown proposed that some businesses that are already exempt from sales tax—including green fees for golf courses and ski lift tickets—would not have to pay the new tourism tax. In what world does it make sense to exempt from taxation uber-luxury purchases like green fees and lift tickets?

“The thing that’s intriguing about a model like this,” said Diane Shober, director of the state Office of Tourism, “is here is an industry that’s willing to levy a fee upon themselves and their customers to invest in a marketing fund that could grow the industry, grow sales and use tax, but also have all of the transparencies of government.”

Shober said her agency would still go before the Joint Appropriations Committee, which would set its budget before it is approved by the entire Legislature.

There is still a large potential roadblock ahead for the proposed tax, despite its strong support from the travel industry. It would earmark the tax revenues for the state tourism office, and historically many legislators have opposed the concept of earmarking funds. It takes away the direct control legislators now have about how the general fund is spent. God forbid the Legislature give up a bit of control for once and allow an agency a hint of autonomy.

Revenue Committee Co-chairman Mike Madden (R-Buffalo) conceded that problem alone could end up being a “poison pill” leading to the defeat of the bill. But he believes it’s one that can be fixed if all parties are willing to work toward a solution.

The committee easily passed by voice vote a motion to draft a bill authorizing a broad, statewide 1 percent tourism tax. The panel still has two meetings before the session starts in January to discuss this and other revenue measures.

Lawmaker proposes to divert mineral tax revenues from savings accounts and use... 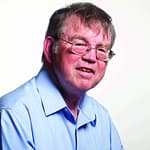 Amidst education funding crisis, Wyoming cities remind Legislature that they’re...
Scroll to top
Share this ArticleLike this article? Email it to a friend!
Email sent!