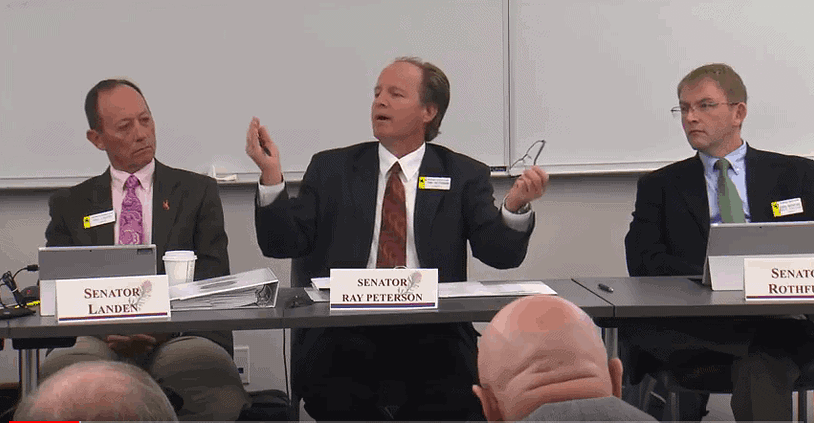 It’s hard to tell whether Sen. Ray Peterson (R-Cowley) is misinformed or just plain lying when he says things like: Every Wyoming citizen will have to pay an extra $2,000 a year in taxes unless the Legislature makes deep cuts to public education. 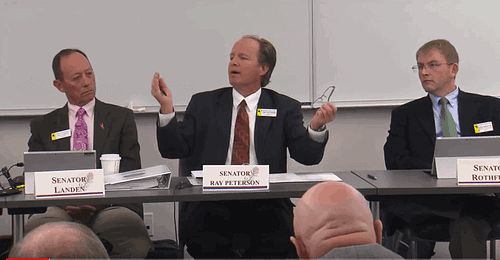 [/fusion_text][/two_third][four_fifth last=”yes” spacing=”yes” center_content=”no” hide_on_mobile=”no” background_color=”” background_image=”” background_repeat=”no-repeat” background_position=”left top” border_position=”all” border_size=”0px” border_color=”” border_style=”” padding=”” margin_top=”” margin_bottom=”” animation_type=”” animation_direction=”” animation_speed=”0.1″ class=”” id=””][fusion_text]“In the survey that WEA sent out about citizens being willing to pay additional taxes, the question may have been more specifically asked as: ‘Are you willing to pay an extra $2,000 annually in your taxes?’ Because that’s about what we’re talking about here,” Peterson said. “Would people have been willing to jump at that? Are you willing to take $2,000 out of your annual income to say, ‘I think school’s that important’?”

Peterson is prone to making bogus claims with fuzzy math when it comes to taxes and education funding. He’s co-chairman of the Legislature’s Joint Revenue Committee, which has been tasked with proposing new revenues to make up for the $250 million shortfall in Wyoming’s annual public education budget. Peterson openly loathes this task and complains that it could hurt him politically. Instead, he insists that the state must make deep cuts to public school funding or face horrendous taxes that will cripple the economy.

“When we raise taxes, we know what that does to our economy. It stifles jobs. It stifles economic diversification,” he said.

Thankfully, other lawmakers at the “Recalibration” meeting were quick to counter Peterson’s claims.

Someone who actually understands the budget

Speaker of the House Steve Harshman (R-Casper) began by pointing out that Peterson’s doomsday scenario was completely blown out of proportion. It’s true, he said, that Wyoming faces a roughly $400 – 450 million budget shortfall (when you add up the $250 education shortfall and another roughly $170 million for school facilities; this was before the latest CREG report came out that painted an even rosier picture of Wyoming’s financial situation).

Even so, Harshman said, the Legislature has already agreed to re-direct some mineral tax revenues to education that it had been squirreling away during the most recent boom. This, he explained, takes care of roughly $120 million of the deficit. If the Legislature continues to pull from the “Rainy Day Fund” at the same rate it has for the past two years—roughly $160 million annually—and you add that to the mineral tax diversion, he said, “that’s $280 million out of the $400 million. So now you’re looking at a $120 – 140 million problem.”

It’s hard to guess how Peterson might explain his $2,000-per-taxpayer figure in light of this information. But we’ll likely never know, since Peterson didn’t make a peep once Harshman, who appears to actually understand the state’s budget and revenue streams, began to talk.

Peterson’s predictions that taxes will unquestionably harm Wyoming’s economy are equally curious. How can he know what raising taxes does to our economy if Wyoming has raised taxes only once in the past two decades—a 10-cent increase on fuel tax in 2013—and, as a result, precisely zero jobs appear to have been stifled?

Given that Wyoming has just about the lowest taxes across the board of any state in America, it is hardly conceivable that raising some revenues will destroy Wyoming’s economy.

Harshman, attentive to the fact that people in Wyoming are unaccustomed to paying their own taxes, pointed out that a hike to the state’s lodging tax would take care of much of the remaining $120 million shortfall—and it would affect visitors most.

“You go to Fort Collins or Denver or Salt Lake, I don’t think anybody’s not going [to those places] because of their high lodging tax,” he said. “That’s $64 million a year right there, with 85 percent paid by out-of-staters. That’s half of your remaining deficit.”

“As someone who also sits on the Revenue Committee, I get a tremendous amount of data regarding Wyoming in comparison to elsewhere in the nation,” she said. “On virtually every element that we look at, Wyoming is one of the lowest-taxed states in the nation, whether it be property tax, sales tax—we have no income tax—cigarette tax, alcohol taxes.”

She agreed with Harshman that an increased tourism tax seemed a no-brainer. “Tourism is our second largest industry, and we have one of the lowest lodging taxes in the nation,” she said.

“We could raise each one of those taxes a half a percent, one percent, two percent, and we would still remain one of the most business-friendly states in the nation,” she said. “We can do that. And certainly what I’m hearing from constituents is that we should be doing it. We should be putting all of those options on the table.”