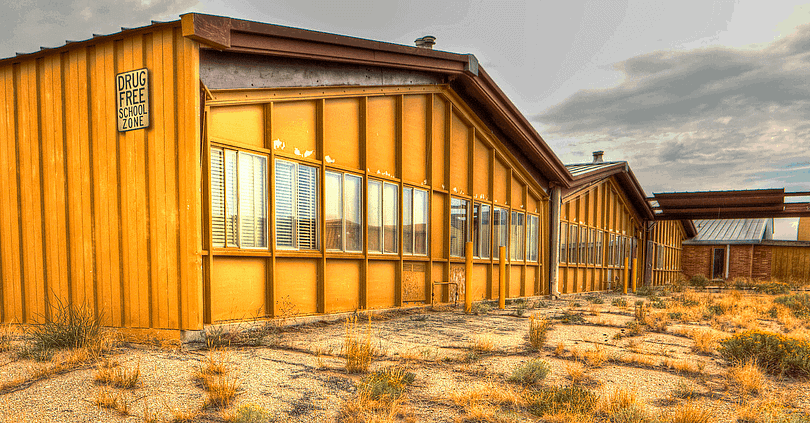 An abandoned school in Jeffrey City, Wyoming, which closed during a mining bust in the 1980s.

When lawmakers argue that funding cuts can solve Wyoming’s education budget crisis, they talk about things like “bloated teacher salaries” and too much administrative bureaucracy. These things, they say, are what causes Wyoming to pay one of the highest per-student costs for education in the country.

But in recent weeks, a different truth has become increasingly clear. The real reason Wyoming spends so much on public schools is that we have a radically dispersed rural population compared to every other state in America.

Every other U.S. state has at least one metropolitan area of more than 100,000 people. Densely populated cities can educate tens of thousands of students under the umbrella of one or two school districts, dramatically driving down per-pupil costs. In Wyoming, small towns have their own superintendents for a couple dozen kids. We build new schools in places like Granger, which has four students. The ranching community of Thoman has a full-time teacher for one second-grader.

If politicians want to find real savings in Wyoming’s education system, they won’t be in teacher salaries or administrations. They’re going to come from shutting down rural schools and busing students to other places.

At the same time Wyomingites are unwilling to accept cuts that threaten students’ access to quality education, folks in Wyoming also value the rural character of our state. Many people—and not just in small towns—are deeply unsettled by the prospect of closing down schools in rural places where they function as crucial community centers.

The Legislature has already made $55 million in cuts from K-12 education over the past two years, and lawmakers say they want to see more before considering new revenues to address the shortfall caused by the busted mineral industries.

But as students, parents, and communities begin to realize the effects of the cuts that have already been made, they might prompt lawmakers to think twice about cutting further.

“Tonight it starts to get painful”

One small town to feel the effects of these cuts is Mills, which sits just west of Casper. Last month, Natrona County School District No. 1 voted to shut down four schools, including the last remaining school in Mills. The second-to-last school in Mills closed in 2016. Trustees know more will be on the chopping block if some lawmakers get their way.

At the October meeting, the NCSD board listened for more than two hours to students, parents, teachers and alumni fighting to keep their favorite facilities open. Then board members voted 8 – 1 to close all four Natrona County schools. Several trustees cried while explaining their votes. Trustee Ray Catellier called the meeting the worst the board has ever had. “I sincerely hope we’ve taken care of the issues [so we don’t] do this ever again,” he said.

Closing three elementary schools and a middle school will save about $2.5 million annually, but trustees said even without other reductions they will still need to make an additional $8 million in budget cuts over the next four years.

Natrona Board Chairman Kevin Christopherson congratulated the administration and board for making its budget cuts so far without laying off teachers, administrators, or staff. Teachers displaced by the closures will be assigned to other schools, and more than 700 students will have to enroll at other schools net year.

“We’ve cut all the low-hanging fruit,” Christopherson said. “Tonight it starts to get painful.”

The Town of Mills released a statement decrying the decision to close its last school, arguing that it would result in “an incalculable loss to the community.”

Other districts are facing the same tough decisions. On Nov. 14 the Sweetwater County School District No. 2’s board of trustees will decide the fate of Jackson Elementary School, on the outskirts of Green River. Superintendent Donna Little-Kaumo, who is faced with a $1.4 million shortfall for 2018, reluctantly recommended the closure. She estimates closing Jackson would save her district about $1.2 million.

Last year Natrona No. 1 also shuttered an elementary school and Carbon No. 1 closed its school in Sinclair. They both managed to do so without losing any teachers, but that will change as budget reductions get larger.

“We could shut down small-town Wyoming. Let’s have those votes.”

At a recent meeting of Legislature’s School Finance “Recalibration” Committee, Speaker of the House Steve Harshman (R-Casper) soberly spelled out the alternatives legislators could face.

“We could shut down small-town Wyoming,” he said. “We could take our high schools and cut the number in half. We could bus all of Glenrock to Casper. Let’s have those votes. Good luck.

“The bottom line is we’ve got a lot of classrooms in this state,” he said. “Could we reduce classrooms? Absolutely.” Harshman pointed out to committee member Sen. Dave Kinksey (R-Sheridan) that Kinskey’s district contains three rural schools that could be closed to save costs. The Sheridan senator is a prominent proponent of school funding cuts.

“Sheridan High School has 400 empty seats—you could close down three of those schools tomorrow and bus them,” Harshman said. “Are we going to close down Buffalo, Tongue River, and Bighorn? I don’t think so.”

We won’t have any teachers

Harshman offered an equally no-nonsense rebuttal to lawmakers who argue that cutting “bloated teacher salaries” is the key to solving Wyoming’s education budget crisis. If they’d rather, Wyoming can keep its schools but not have any teachers to staff them.

“We can say we’re going to pay our teachers a $25,000 starting wage. Good luck. We won’t have any teachers. They’re mobile, just like construction workers and oilfield workers,” he said.

Harshman then ticked off what teachers earn in Casper versus what they earn in surrounding states. The highest salary a Casper teacher can achieve is $69,000. In Salt Lake City and Fort Collins, teachers can earn $75,000; in Boise they earn $70,000; in Lincoln, Nebraska, the top pay grade is $82,000.

“We’re paying starting teachers in Cowley, Wyoming, fifty grand for a reason—not out of the goodness of the school board’s heart,” he said. “You’re going to have to get people to come here and work.

Little-Kaumo, the Sweetwater County superintendent, noted in an interview that when the minerals industry was doing better the Legislature allowed districts to significantly boost pay. Wyoming went from being one of the worst-paid states for teachers to one of the best.

But as Wyoming teacher salaries stagnate and the Legislature threatens more cuts, Little-Kaumo said she has already lost some of her best people to Salt Lake City. The United States faces a nationwide teacher shortage, making it easy for educators to find jobs elsewhere.

“We’re going to lose these highly qualified teachers; once they’re gone they’re not coming back,” Little-Kaumo said. “If that happens it will take us years to recover, if we even can.” 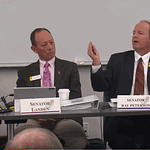 Peterson, Curley, and who pays if Wyoming moves away from minerals
Scroll to top
Share this ArticleLike this article? Email it to a friend!
Email sent!