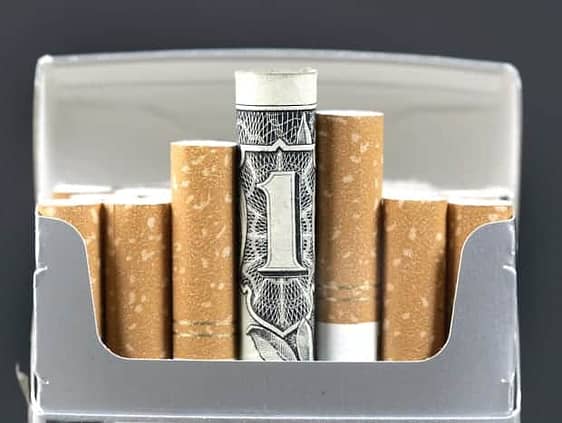 Something’s wrong when elected officials won’t listen to more than three-quarters of Wyoming residents who say they want higher taxes on cigarettes.

Claims that Wyoming voters won’t stand for any tax increases are simply not true. A December 2016 University of Wyoming study indicated that 78 percent support a significant increase in cigarette tax rates.

Voters at the time of the survey were well aware of the budget problems Wyoming faces as a result of our dependence on boom-and-bust mineral revenues—problems that haven’t gone away, and that an increased cigarette tax could help alleviate.[/fusion_text][/one_third][two_third last=”yes” spacing=”yes” center_content=”no” hide_on_mobile=”no” background_color=”” background_image=”” background_repeat=”no-repeat” background_position=”left top” border_position=”all” border_size=”0px” border_color=”” border_style=”” padding=”” margin_top=”” margin_bottom=”” animation_type=”” animation_direction=”” animation_speed=”0.1″ class=”” id=””][fusion_text] 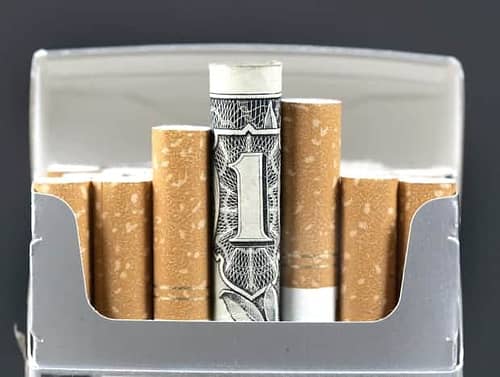 Earlier this month, the Joint Revenue Committee voted 7 – 6 to move forward a proposal that would increase the cigarette tax from 60 cents to $1.60 per pack in Wyoming. The committee will decide whether to formally sponsor the bill at its Dec. 4 – 5 meeting at the Jonah Business Center in Cheyenne. If it does, the bill will be considered by the full Legislature during the upcoming budget session in February.

The tobacco industry—with the help of obedient legislators—has managed to keep Wyoming cigarette taxes at one of the lowest rates in the country since 2003, the last time lawmakers raised the rate. Cigarette taxes had been 12 cents per pack, but that year proponents of a higher rate convinced the Legislature to raise cig taxes five-fold, to its current rate, 60 cents per pack, the 43rd highest in the nation.

Right-wing, no-taxes-ever radicals would lead lawmakers to believe that voting for any tax increase is political suicide in Wyoming, and that taxes kill businesses. If history is any guide when it comes to cigarette taxes, they’re wrong.

Not a single legislator lost his or her job as a result of voting for the tax increase in 2003. In fact, many who voted “aye” back then are still serving in the Legislature, including Senators Charlie Scott (R-Casper), Bruce Burns (R-Sheridan), Jeff Wasserburger (R-Gillette), and Curt Meier (R-La Grange), as well as Representatives Steve Harshman (R-Casper), who’s the Speaker of the House, and David Miller (R-Riverton).

Current U.S. Senator John Barrasso was a Wyoming State Senator in 2003 who voted for the tax increase. His political career seems fine.

Likewise, cigarette businesses were less than hysterical as a result of the last tax hike. When asked whether she expected to lose business over the 2003 increase, one Smoker Friendly manager simply smiled and said, “No, we’re too nice.”

Supporters of the current proposal to raise Wyoming’s per-pack tax to $1.60 argue that the higher rate will bring in much-needed revenue to help close the $250 million shortfall facing the state’s annual education budget. They also note that, if the cost of cigarettes goes up, fewer people will smoke, which will help the state drive healthcare costs down.

“That’s not chump change,” Connolly said. She noted that the $1.60 rate would bring Wyoming up close to the national average of $1.72 per pack.

A 2004 study by the Wyoming Survey and Analysis determined that “the 2003 tax increase has both increased tax revenue and reduced cigarette consumption in Wyoming.” There’s no reason to believe it wouldn’t happen again.

Wyoming spends roughly $258 million per year on healthcare directly related to smoking. Jason Mincer, government relations director of the American Cancer Society, told the Revenue Committee at its meeting earlier this month that about 800 people in Wyoming die each year of tobacco-related diseases.

The state would likely experience some immediate health-related benefits as a result of the proposed tax hike as smokers quit with the encouragement of higher costs. But long-term benefits would be significant, Mincer said, especially when it comes to preventing youth smoking.

“If we can price [young people] out at the register, we can keep them from becoming life-long addicts of tobacco,” he said.

An adult, lifelong smoker with a job might wince at a price increase but continue to fork over money for the habit. It’s much more likely that a high school student with limited income would look at a $1-per-pack price increase and decide the cost just isn’t worth it.

Citizens must speak louder than lobbyists

With a litany of good reasons to raise cigarette taxes—including broad popular support—what could possibly be keeping the Legislature from doing it?

Wyoming’s tobacco lobby is paid well and produces great results for their employers. At Legislative meetings when the topic of cigarette taxes comes up, the 78 percent of Wyomingites who told surveyors over the phone that they’d like to see an increase are nowhere to be found. The lobbyists are the only ones giving lawmakers “guidance.” Their arguments range from the misleading to the completely counterfactual, but no one is there to say otherwise.

At a meeting in August, the Revenue Committee became so confused by a well-orchestrated lobbying push to kill a cigarette tax bill that it tabled the proposal, even while moving forward every other proposal in front of them. Outside in the parking lot, Better Wyoming witnessed the tobacco lobbyists literally high-fiving and hooting and hollering about their victory in bamboozling the legislators.

At this month’s Revenue Committee meeting, one citizen did arrive to testify in support of the cigarette tax. Meg Varhalmi, a Cheyenne mother of two, told the lawmakers that new revenues from things like increased cigarette taxes would be crucial to creating a stable funding stream for Wyoming public schools. Wyoming’s education budget faces a $250 million shortfall as a result of declining mineral revenues.

Varhalmi told the committee about how she and her family had moved to Cheyenne for her husband’s job from Las Vegas. Nevada lawmakers in recent years have dealt with education budget issues by increasing class sizes, Varhalmi said, and “cutting things like art and music.” She said she was delighted to find Wyoming’s schools were so superb in comparison, and she’s willing to do what’s necessary to keep the quality of education high.

“Education is a precious and valuable commodity,” Varhalmi said. “It’s something that I, as a member of this community and as a parent, am willing to spend more on taxes, and I want it to go to education.”

Whether or not Varhalmi’s words were the deciding factor, the committee voted to move forward the proposed increase on cigarette taxes when they had tabled it before. When it comes to decisions like this, citizens’ voices can make all the difference in the world.

Proposals to make strangling your wife a “violent” felony test
Scroll to top
Share this ArticleLike this article? Email it to a friend!
Email sent!