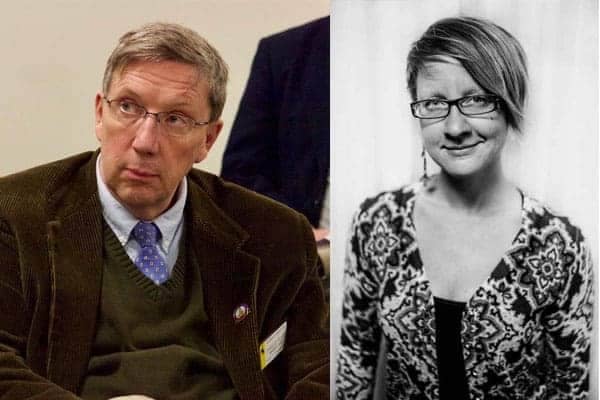 Charles Pelkey (L) is sponsoring a bill to classify domestic strangulation as a "violent" felony, which is it. But the ACLU's Sabrina King (R) says the proposal would contribute to Wyoming's prison problem and wouldn't protect victims.

Strangling your wife is not considered a “violent” crime in Wyoming.

Wyoming’s laws protecting women from domestic violence are weak across the board. Classifying domestic strangulation as “nonviolent,” as our state’s statutes currently do, seems like one of several no-brainer problems that decency might compel the Legislature to fix. 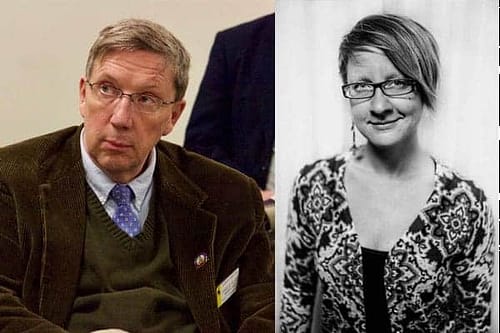 Charles Pelkey (L) is sponsoring a bill to classify domestic strangulation as a “violent” felony, which is it. But the ACLU’s Sabrina King (R) says the proposal would contribute to Wyoming’s prison problem and wouldn’t protect victims.

The ACLU is typically considered a liberal organization. But it nevertheless has a longstanding history of defending unlikely-seeming parties on principle—for instance, it has long stood up for the free speech rights of neo-Nazis. Arguing against longer prison sentences for scumbags who strangle their wives, on the basis of fighting mass incarceration, is another example of the organization sticking to its guns.

There’s no such thing nonviolent strangulation

As a “nonviolent” felony, strangling someone you live with in Wyoming is currently punishable by up to five years in prison. Rep. Charles Pelkey (D-Laramie), an attorney, said that he decided to work on changing the law when he had a strangulation victim as a client. She suffered long-term injuries from an attack that wasn’t deemed by the state to be “violent.”

“Frankly, there’s no such thing as friendly strangulation,” Pelkey said. “I can think of no more violent act than taking your hands and trying to squeeze the life out of an individual.”

He said the whites of his client’s eyes were red. “The pressure built up in those eyes and caused the capillaries to burst, which is a frightening sight in and of itself—until you realize the same thing is happening inside her brain,” Pelkey said.

The offender received a four-to-five-year sentence, but could have been imprisoned for up to 10 years if Wyoming considered such a crime a violent felony. Other violent felonies in the state include murder, manslaughter, kidnapping, sexual assault in the first or second degree, and aggravated assault.

The distinction between nonviolent and violent felonies is important. People convicted of violent felonies cannot own or possess firearms. The crime also can’t be expunged from someone’s criminal record.

Pelkey said according to the National Domestic Violence Hotline, domestic violence victims are 10 times more likely to be killed by their partner if they have been strangled in the past.

Pelkey’s goal to reclassify strangulation of a household member is one step closer to reality after the Joint Judiciary Interim Committee met this earlier month in Wheatland. The committee included the strangling provision in a bill to unify the state’s domestic violence laws. The vote was 13 – 0 to sponsor the bill.

But a recent report released by the Wyoming chapter of the American Civil Liberties Union is squarely at odds with the committee’s attempt to double the maximum penalty for strangling a household member. The organization advised lawmakers to take a serious look at criminal justice reform to lower the number of people incarcerated in Wyoming and reduce Department of Corrections’ costs.

In a recent guest column for WyoFile, Wyoming ACLU chapter director Sabina King wrote that, at the Judiciary Committee’s meeting, even people who advocated for longer prison sentences didn’t believe that the bill would deter perpetrators of violence. It’s simply punishment for the sake of punishment.

King noted that during the past four years the Wyoming Legislature has passed 70 bills establishing new crimes or increasing the penalty for a crime already in state law. While King described strangling a household member as “a horrendous crime,” she said our laws must instead comprehensively address the problem in order to protect victims and potential victims.

Besides, no one who’s about to strangle his wife in a fit of drunken rage is likely to stop and think, “Golly, didn’t I just read somewhere that the Legislature increased the penalties for this?”

But what about the poor men?!

It’s a strange day when Sen. Larry Hicks (R-Baggs) sides with the ACLU. Better Wyoming honored Hicks with a 2017 “Worst of Wyoming” award in part for his proposing a bill to defend white people from discrimination, his regular badgering of women who are giving public testimony, and his ardent support for stripping Wyoming women of their reproductive rights.

At the Judiciary meeting, he inclined to agree with the civil rights organization against increased prison sentences because, he said, he was concerned that men might be the victims of false accusations of domestic violence and would be unduly punished.

“We all grapple with this. I’ve served six years [in the Senate] … the one thing that keeps resonating with me is ‘where is the protection [for the accused men]?’“ Hicks said. “Once in a while, we get this wrong, and we ruin someone’s life. Where do we find the safeguards in this issue for the wrongfully accused?”

Brett Johnson, a former Natrona County prosecutor who was giving testimony in favor of the bill, appeared dumbfounded. He explained to Hicks there are no specific “safeguards” for people accused of strangling a family member “any more than there are under the murder statutes.

“The problem that we have with respect to family violence is not that we’re too zealous about prosecution. The problem is the lack of prosecution. We don’t take it as seriously as we do drug offenses and some other things,” Johnson said. “I know people get wrongfully convicted sometimes but in my experience it doesn’t happen very often. Every prosecutor has the absolute responsibility [to prove guilt] beyond a reasonable doubt.”

Hicks wasn’t convinced, however, and took a page from the ACLU’s playbook, arguing that increased sentences don’t result in deterrence.

Sen. Dave Kinskey (R-Sheridan) echoed Hicks’ concerns. He said the state could raise the penalty for strangulation up to 20 years, but it might not reduce domestic assaults. “We only do so much by passing more laws to address what is a very serious societal issue,” he said.

Rep. Bo Biteman (R-Ranchester), a newish representative, typically sits quietly through these meetings without saying much. He had gone all morning without comment while the committee discussed two bills to make the possession of edible marijuana illegal, though he voted against them both.

In the midst of Kinskey and Hicks’ teardrops about whether the proposed strangulation bill might be overly harsh, however, Biteman had enough. He pointed out the committee’s hypocrisy in voting for bills to put people in prison for possessing edible marijuana and then worrying over classifying strangulation as “violent.”

“This morning we were talking about making possession of more than three ounces of brownies [with THC] a felony,” Biteman said. “Now here we’re having heartburn over making [strangulation] a violent felony. What kind of a message are we sending?”

There are, of course, alternative ways to prevent violence that don’t have to do with prison. Tara Muir, public policy director of the Wyoming Coalition Against Domestic Violence and Sexual Assault, told the committee that, for instance, many abusers also have substance abuse problems. Programs that tackle substance abuse could also help prevent domestic violence.

“Every community should have some kind of batterer prevention program,” Muir said.

Sen. Tara Nethercott (R-Cheyenne), one of two women on the 14-person Joint Judiciary Committee and one of three women in the entire Wyoming State Senate, said she agreed with Pelkey’s bill in large part because it would signal to women that the state actually cares about their safety and well being—even if it does so by putting people in prison for longer.

Nethercott said she agreed that the bill won’t stop all domestic violence in Wyoming, but that it’s important for the Legislature “to send the message that we value the lives of women as much as we do the lives of men.

“If two men in a barroom punch each other in the face, they expose themselves to a year in jail,” Nethercott said. “If you punch your wife in the face, you’re going to jail for only six months. That’s not OK, nor is that uniform.”

Raising cigarette taxes is a popular, commonsense way to raise revenues, save...

Revenue Committee to consider property tax bill to fund schools and reduce tax...
Scroll to top
Share this ArticleLike this article? Email it to a friend!
Email sent!