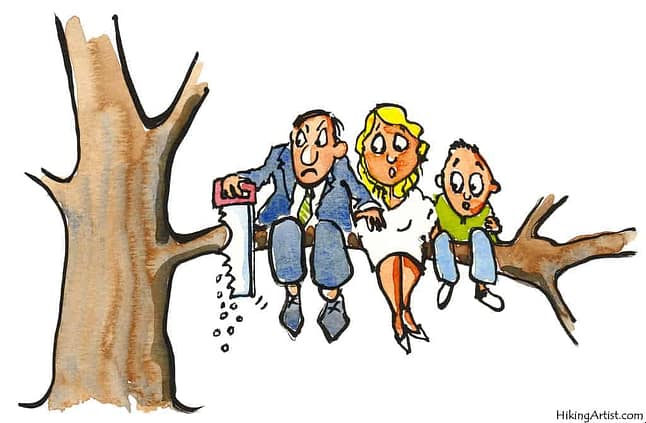 To a Legislature with a saw, every public service looks like something worth cutting.

They admit that Wyoming’s reliance on mineral tax revenues for 70 percent of the state’s budget is a problem. Everyone can see how ludicrous it is to try to keep a state functioning while riding a boom-and-bust economic roller coaster.

But when the topic of new revenues comes up, the Good Ol’ Boys in the Legislature trot out a tired mantra: “I’m open to new taxes, but I want to see some cuts first.”

It’s the type of cliché one gets sick of hearing around the Legislature. Lawmakers mindlessly recite it like robots programmed with last year’s “Fiscally Conservative Catchphrase” software.

Wyoming State Senate leaders like Senate President Eli Bebout (R-Riverton) and Senate Education Committee Chairman Hank Coe (R-Cody) perhaps love the phrase the most. It makes them sound like responsible, reasonable lawmakers—except, in reality, the State Senate has defined itself as the political body most stridently in favor of keeping Wyoming suckling at the mineral industry’s teat.

You see, the really infuriating thing about the whole “We’ll raise some taxes after we make some cuts” line is that it’s a complete and utter lie.

All cuts, no new revenues

The State Legislature has cut hundreds of millions of dollars in the past two years from Wyoming public schools, healthcare, transportation, family services, and other programs that are critical to residents throughout the state.

But as the Legislature’s 2018 budget session approaches, are leading lawmakers talking about new non-mineral revenues to address the continuing budget crisis since they’ve already made such deep and wide-ranging cuts?

The Joint Revenue Committee has balked at sponsoring any major tax increase, and chances are slim that either a sales or property tax hike will pass at the committee’s upcoming meeting next week. Even a hospitality and leisure tax with the full backing of the tourism industry might not survive Bebout’s anti-tax skullduggery. Bebout complains that, since bars and restaurants would have to levy the leisure and hospitality tax, it would affect too many Wyoming citizens and not enough out-of-staters.

God forbid the people of Wyoming ever actually pay for something ourselves instead of relying on mineral corporations and tourists.

Doesn’t the Cowboy Code say something about self-reliance?

Instead, faced with an annual budget shortfall somewhere in the vicinity of $400 million, lawmakers during the budget session will attempt to do what they do best: cut public services and state agencies (even while the state has literally billions and billions of dollars in its various savings accounts).

The Legislature released last week a proposed budget that calls for the elimination of 50 state jobs. This is in addition to the 90 jobs eliminated as a result of the 2016 budget session.

The proposal shifts a few revenue streams around to keep some agencies, like the Department of Health, from completely imploding. But it continues to cut wherever lawmakers see an opportunity, such as eliminating a program that assists parents of developmentally disabled children.

Bebout aims to cut $50 million from schools this session

Since education funding is separate from the state’s general fund, the Joint Appropriations Committee’s proposal does not describe the cuts coming up for Wyoming public schools.

Wyoming public education has seen $77 million cut from its annual budget over the past two years, and sources inside the Legislature say that Sen. Bebout is aiming for an additional $50 million this session.

Nearly 600 public school jobs have already been eliminated as a result of the cuts so far, along with programs, materials, and activities for children throughout the state. At least eight small Wyoming schools have closed as a result of the cuts. School districts are preparing to sue if the Legislature’s cuts this session prove unconstitutionally deep.

When are cuts too much?

Bebout, Coe, and company continue to claim that, hypothetically, they care about weaning Wyoming from its mineral addiction by diversifying the state’s tax structure. But they care much more about their own political futures than actually facing Wyoming’s tough problems, and they know that clamoring for “SMALL GOVERNMENT” and “NO NEW TAXES” plays well to their base.

But just as the residents of Kansas ousted anti-tax lawmakers in elections after watching their roads, schools, and state agencies fall apart after years of budget cuts, perhaps Wyoming voters will one day tire of politicians who promise that they’ll fix the state’s underlying problems, but never do.

In the meantime, as lawmakers attempt to further gut state agencies, schools, and public services during the 2018 budget session, it will be important to keep in mind the cuts they’ve already made so far.

How to cut Wyoming’s education budget shortfall in half without raising taxes...

The Cuts So Far (Part 2): Healthcare – Living (and dying) within our ...
Scroll to top
Share this ArticleLike this article? Email it to a friend!
Email sent!