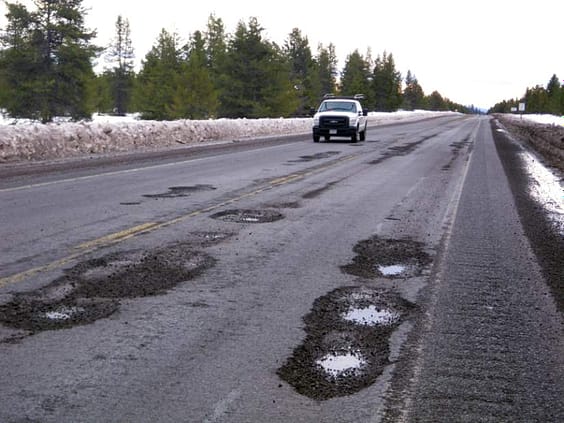 This gouge to WyDOT represents only a small part of the revenue required to maintain Wyoming’s critical highway infrastructure, but it’s part of a much larger problem.

More than $100 million worth of WyDOT maintenance projects are waiting to be done, but no funds are available as the result of budget cuts. The longer those projects are left to deteriorate, the more expensive they become to eventually fix.

Meanwhile, debates in Congress indicate that federal highway funds nationwide will be cut within the next year.

As the Wyoming Legislature continues to refuse to raise new revenues for even the most basic of government functions, it’s going to be a bumpy ride for Wyomingites.

The Legislature cut a total of $11.9 million from WyDOT last year—for highway projects and otherwise.

WyDOT employs about 2,000 workers who do much more than build and fix highways. The department also includes the Wyoming Highway Patrol, the Department of Motor Vehicles, state emergency communications, and all the state’s airports.

Federal funds typically cover about 65 – 70 percent of WyDOT’s roughly $580 million budget. Wyoming covers the remainder with money from the General Fund and a cocktail of other “state funds” that include revenue from vehicle registration and the state’s fuel tax.

But WyDOT Director Bill Panos said that if debates in Congress are any indication, the federal government seems ready to let Wyoming take on a bigger share of the cost. Wyoming’s reliance on federal road funds is higher than the 60 percent national average.

“A significant shift is going on,” Panos explained. “The [United States] House and Senate are both considering an infrastructure proposal that fundamentally shifts the burden for transportation infrastructure from the federal government to the states.”

Legislators in Wyoming tend to howl anytime they perceive “federal overreach.” But listen for those howls to get even louder when lawmakers are forced to find in-state funding to keep Wyoming’s highways passable. Poor roads get poorer if you don’t fix them

About 19 percent of Wyoming’s highways are rated in “poor condition.” This percentage has stayed pretty consistent since 2010, the year after WyDOT got a big one-time funding boost from the feds.

But the thing about poor roads is that they get even poorer if you don’t fix them. With funding cuts from the Legislature and the threat of dramatically decreased federal funds, it’s likely that Wyoming’s highways are going to fall deeper into disrepair—and become much more expensive to fix.

Panos estimates that the cost of fixing all of the problems WyDOT has identified but doesn’t have the funds to address is about $101 million—$73 million for highway projects and $28 million for other infrastructure repairs.

But that $101 million price tag will keep getting bigger if WyDOT keeps putting off maintenance.

For instance, WyDOT aims to upkeep asphalt roads with preventative maintenance 6 – 8 years after construction. A delay of as little as two years beyond that can cause the roadway to deteriorate by 40 percent and prompt the agency to have to rebuild it completely—at a cost four to eight times more than if maintenance had been completed on time. (For concrete roadways, maintenance needs to take place between 15 – 20 years after construction, and a delay of five years can cause the price to skyrocket.)

So Wyoming lawmakers who refuse to raise the needed revenue for road repairs are not only wreaking havoc on your car, making it hard for businesses to transport anything, and making our highways less safe—they’re planning on letting future generations pick up the tab at a highly inflated price if we want our roads fixed.

The Wyoming Legislature has two options if it ever decides to raise revenues to fix the state’s roads: it could raise some kind of general tax that would go into the state’s General Fund, where most money that funds state operations comes from; or it could raise the state fuel tax, which is earmarked specifically for WyDOT.

The only time in recent history that Wyoming has raised any tax whatsoever was in 2013, when the Legislature voted to increase the state fuel tax from 14 cents to 24 cents per gallon. This increase generates about $77.3 million per year, and the state’s diesel tax increase accounts for another $86.6 million annually.

Since the fuel tax increase was the last tax hike most people in Wyoming remember, it’s unlikely many lawmakers would be so brave as to support another bump up, despite the facts that the tax is designed to primarily target out-of-state distributors and that, even with the 2013 increase, Wyoming’s fuel tax remains one of the lowest in the nation. Of the states that surround Wyoming, only Colorado has a lower fuel tax.

But after the Legislature’s Revenue Committee stunningly refused to sponsor even the most commonsense of tax proposals at its final meeting before the 2018 budget session—a “hospitality and leisure” tax backed by the entire Wyoming tourism industry as a means of investing in the state’s Office of Tourism—it seems as though the loud, scary voices of no-taxes-ever zealots will keep the current crop of legislators from doing anything productive in terms of moving Wyoming away from its dependence on boom-and-bust mineral revenues.

Meanwhile, the potholes grow deeper and more expensive to fix. Perhaps some will grow big enough to become tourist attractions that we can name after members of our irresponsible Legislature.

The Cuts So Far [Part 3]: University of Wyoming – College dazed

The Cuts So Far (Part 5): Corrections – The high cost of quitting prison...
Scroll to top
Share this ArticleLike this article? Email it to a friend!
Email sent!