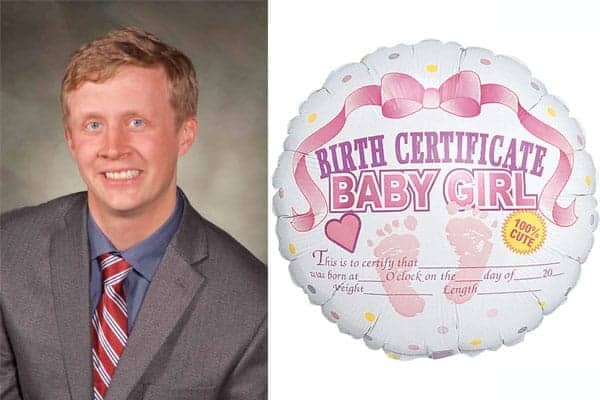 The Wyoming State Legislature just can’t resist the urge to barge into doctors’ offices and tell physicians and their female patients what to do during the most private and vulnerable scenarios imaginable.

A proposed bill that would force medical professionals to offer a “nonviable birth certificate” to women who miscarry a pregnancy passed introduction in the Senate on Wednesday. It will be considered by the Senate Committee on Labor, Health, and Human Services next week.

Senate File 85’s sponsor is Sen. Brian Boner (R-Douglas), who will of course never experience a miscarriage himself. He’s got an advanced degree in Agribusiness and his occupation is “farmer/rancher” according to the Wyoming State Legislature’s website. Perhaps his experience with livestock miscarriages gives him insight into the proper medical attention a (human) woman who’s just experienced a miscarriage needs.

Boner’s speech in the Senate chambers on Wednesday sure made it seem as though he believes himself some kind of medical expert.

His bill, he said, “will be a way to educate people about an issue that occurs in about 10 percent of pregnancies after the first trimester.”

There you go. Sen. Boner is going to make doctors offer women birth certificates for their miscarried fetuses in order to educate them. If there exists a more presumptuous, pathological, morbid variety of mansplaining, we’re struggling to imagine it.

Of course, Boner’s bill actually has nothing to do with education, and everything to do with chipping away at Wyoming women’s reproductive rights by manipulating the language the state uses to describe pregnancy.

Anti-abortion activists are in the midst of a decades-long crusade to change the legal definition of a “fetus” and, instead, make it an “unborn child” in the eyes of the law. The thinking is that, if a fetus is really a child, then you simply cannot kill a child—making abortion de facto illegal.

But a seed is not a tree. A fetus is not a child. A miscarriage is a body’s way of expelling a nonviable pregnancy—it is not a birth. It does not call for a birth certificate.

A wild intrusion into the doctor-patient relationship

Boner’s proposal would apply to fetuses miscarried between nine and 20 weeks of pregnancy, spanning the first and second trimesters.

Miscarriage at any point in a pregnancy tends to be a traumatic experience. Linda Burt, a lobbyist for NARAL Pro-Choice Wyoming, points out that women who miscarry early in a pregnancy might be relieved that the loss occurred before they had time to personalize the pregnancy. Forcing a doctor to intrude into this situation by offering a birth certificate would be harmful in these instances.

“My concern is that it’s an interference with a birth issue that is extremely private,” Burt said. “It’s something that women should be able to decide on their own, and not be asked whether they want to name a fetus. I think in many situations this could put more stress on a woman and her family, as opposed to less stress.”

For a Legislature that tends to view itself as valuing hands-off, small government, this bill is a wild intrusion into the doctor-patient relationship.

Medical personnel, not the government, should decide on a case-by-case basis what counseling, guidance, and information to give to women dealing with miscarriages.

Boner told the Senate on Wednesday that his bill purposely avoids using medical terminology. It describes a miscarriage as “an unintentional spontaneous demise that happens in a pregnancy.”

It just “happens in a pregnancy.”

“Most medical professionals believe there is a medical reason for a miscarriage,” she said. “Putting any extra pressure on a woman who is under enormous stress anyway is inappropriate.”

Burt said NARAL is also concerned that the Boner bill may be a step toward legislation that would declare a fetus a person.

“You have to wonder why they are even bringing the bill, because it’s so unnecessary,” she said. “Using the term ‘birth’ for a miscarriage is not an appropriate medical term under any circumstances. I just want to know what the actual motivation is.”

Sara Burlingame, director of Wyoming Equality, said the bill to her “feels like an intrusion into something that is incredibly private.”

She said the sponsors of SF 85 “may want to honor something. But when I read it, that didn’t come across to me—it sounded like male politicians using it for what feels like political theater.”

It’s also a wild intrusion by the government into doctor-patient relationships during an intensely personal and often traumatic situation.

CLICK HERE to use our quick and easy form to write your local legislators and ask them to vote NO on Boner’s bill.

Two criminal justice reform bills sail through the House, as they have in years...
Scroll to top
Share this ArticleLike this article? Email it to a friend!
Email sent!