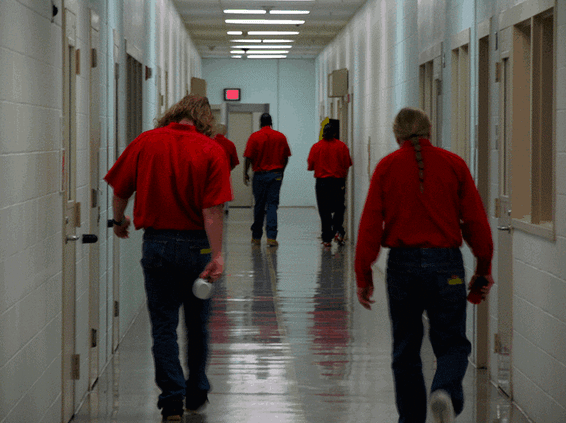 Inmates at the Wyoming State Penitentiary

It could be déjà vu in the Legislature for two positive criminal justice reform proposals that easily passed the House last year but never even had a chance to be heard in the Senate, thanks to some backhanded procedural moves by “tough on crime” lawmakers.

This week, the House Judiciary Committee unanimously approved both new reform bills, 9 – 0, just as it did early in the 2017 Legislative session.

One bill would offer judges some alternatives for sentencing people who violate probation or parole, rather than automatically sending them to prison.

The other bill would overturn an absurd law currently on the books that says if new non-DNA evidence arises to clear someone of a crime more than a couple years after they’ve been wrongfully convicted, it doesn’t matter—that person has to stay in prison anyway.

But just because they’ve moving through the House with haste doesn’t mean either of these commonsense proposals is going to get by Senate President Eli Bebout (R-Riverton). Last year, Bebout singlehandedly killed a comprehensive criminal justice reform bill that had been painstakingly crafted by the Joint Judiciary committee and enjoyed support from basically everyone but Bebout’s buddies.

Other lawmakers, like Sen. Leland Christensen (R-Alta) and Sen. Dave Kinskey (R-Sheridan), lurk throughout the Senate who are eager to kill any measure that doesn’t keep our prisons overflowing with inmates.

The comprehensive criminal justice reform bill that Bebout killed last year contained the non-prison sentencing alternatives as one of its many provisions. Bebout simply put the bill in his desk and refused to assign it to a committee, killing it for the session.

Meanwhile, it took all five members of the Senate Judiciary Committee last year to kill the “actual innocence” bill sponsored by Rep. Charles Pelkey (D-Laramie), which would allow non-DNA evidence to exonerate wrongfully convicted people whenever that evidence arises.

As though mocking Pelkey’s bill, Sen. Kinskey gave a little wink to his colleagues on the committee and motioned for the bill to be heard. They smiled back at him, sent a quick glance to Pelkey sitting in the audience, and sat in silence, refusing to second the motion. This procedural act killed the bill, which had passed the House 60 – 0.

As Pelkey fumed in the hallway, the Senators all went and drank highballs with prosecutors (we imagine).

People who violate probation or parole in Wyoming are currently, by and large, automatically sent to prison. No passing “Go,” etc.

Partly as a result, 40 – 45 percent of Wyoming’s prison population consists of parole and probation violators.

“We take in about 900 to 950 inmates a year into the Department of Corrections prison system, and about half are coming in because of parole and probation violations,” Wyoming DOC Deputy Director Steve Lindley told the House Judiciary Committee this week. He added that about 80 percent of those are coming back for substance abuse issues.

House Bill 42 would allow judges two non-prison alternatives for probation and parole violators, lessening the crowding problems our prisons are currently experiencing and saving public money all at once.

The first option is cutely referred to as a “quick dip”—two or three days in county jail to give violators a wake up call and some time to cool their heels and consider their path in life.

Unsurprisingly, the general motivation among Wyoming lawmakers for criminal justice reform is not their progressive views on the problems with mass incarceration. It’s about money.

The non-prison alternatives measure would cost about $700,000 a year to implement, because it would require county jails to set up substance abuse treatment programs they currently lack. But housing someone in prison costs Wyoming between $35,000 – 53,000 per inmate each year, so the savings stack up quickly when you’re keeping folks out of prison. HB42 could save the state an estimated $5 million per year.

DOC Director Bob Lampert also noted this week that Wyoming’s prisons are filling up and unless the state has other options it will need more beds and more prisons, or otherwise start sending prisoners to be housed out of state.

Lampert said he believes these non-prison alternatives will keep about two-thirds of the parole and probation violators from returning to prison.

Rep. Nathan Winters (R-Thermopolis) spoke in support of the measure, noting that the $700,000 per year cost doesn’t take into account “the global picture” that Wyoming will save money in the long run.

But when has the Wyoming Legislature been known for its foresight?

A cruel and absurd law

The second measure sailing through the House, HB-26, would bring some sanity into Wyoming’s legal system by repealing the law that says if new non-DNA evidence clears someone of a crime more than two years after a wrongful conviction, that person is out of luck.

Michelle Feldman, state policy advocate of the Innocence Project in New York, testified last summer that it takes an average of 10 years after new evidence arises to round up witnesses, conduct a new investigation, get a new trial, and jump through all the other hoops required to actually get released.

In Wyoming, that’s about eight years too long under current law. You’re stuck, even if everyone knows you’re innocent.

However, Wyoming law states that new DNA evidence can arise at anytime and be the grounds for a wrongfully convicted person’s release.

The question that legislators need to answer is: Why does DNA evidence count forever while the two-year clock on non-DNA evidence begins as soon as the cell doors shut?

A new hope … but don’t get your hopes up

The main reason the Senate Judiciary Committee killed the actual innocence bill in 2017 was because John Knepper, chief deputy attorney general, came out of nowhere and testified that he had several great concerns about the bill. He forewarned that hundreds of frivolous claims of innocence could clog up the courts and waste judges’ time if the two-year limit was removed.

Knepper hadn’t come to any of several meetings the House Judiciary Committee had held on the bill, so his last-minute speech convincing Senate Judiciary to sink the bill didn’t set well with many members of the House, including sponsor Pelkey.

“In spite of my 20-plus year friendship with Mr. Knepper, I had to keep from throttling him,” Pelkey said this week. “But he said he would join the effort to find a solution [to answer his concerns] and he was true to his word… We’ve taken what I considered to be a good bill and made it even better.”

A committee that included Knepper, Pelkey, Feldman, Tina Olson of the Wyoming State Public Defender’s Office, and representatives from a variety of legal groups met to create HB-26, which now has Knepper’s blessing. It’s also sponsored by the Joint Judiciary Committee, rather than a single lawmaker (who’s also a Democrat), giving the bill a better chance.

But don’t count your chickens before they hatch. This is the Wyoming State Legislature we’re talking about.

Senate introduces bill to give birth certificates to miscarried fetuses

Back-door Bebout reassigns public school defunding bill to a friendlier com...
Scroll to top
Share this ArticleLike this article? Email it to a friend!
Email sent!