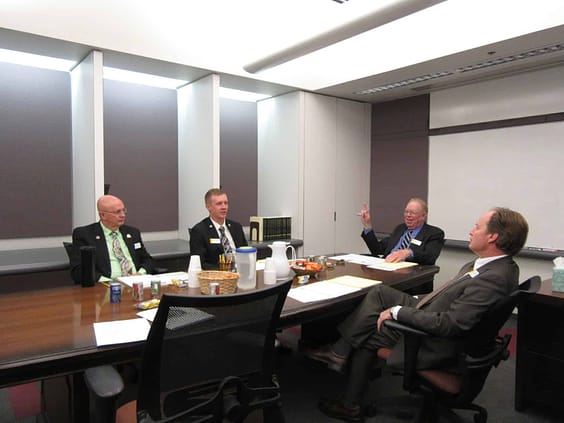 A proposed law that would force Wyoming doctors to offer “nonviable birth certificates” to women who miscarry pregnancies passed the Senate Labor and Health Committee this morning with a unanimous vote.

Consideration of Senate File 85—or “Boner’s Bill”—began Monday morning, but continued Wednesday because so many people showed up to speak against it that they ran out of time at the first hearing.

Every single person who testified spoke against the bill, and each speaker on Monday was a woman who had experienced a miscarriage.

Every single lawmaker who voted for the bill was a man who had not experienced a miscarriage, but who presumed to know what’s best for women who do.

“Redundant? What? Because everyone is against this?”

The Senate Labor Committee kicked off at 7 a.m. on Wednesday and heard testimony for a total of three minutes before cutting off the rest of the people who had attended to speak against the bill.

“This testimony is getting redundant, so we’re going to end it and call a vote,” said Senate Labor Committee Chairman Charlie Scott (R-Casper).

Precisely one person—Dr. Rene Hinkle of the Cheyenne Regional Medical Center—had given testimony that morning.

“Redundant? What? Because everyone is against this?” said Kyla Reed, a former substitute teacher who had come to speak against the bill.

Reed became frustrated while leaving the conference room and interrupted Scott as he tried to move on to the committee’s next agenda item. She told Scott and his committee that they should be ashamed of themselves.

“The opposition should know that those tactics might cause the bill to pass,” Sen. Scott said. He emitted a creepy Emperor Palpatine-like laugh.

Like children picking up tweezers to play a game of “Operation,” the men of the Senate Labor Committee—encouraged only by an anecdote from a “friend” of the bill’s sponsor, Sen. Brian Boner (R-Douglas)—decided that, despite their total medical knowledge being confined to one committee member’s training as a physicians’ assistant, they know better than doctors how a woman should be treated in the event of a miscarriage.

Sen. Scott, Sen. Boner, and their colleagues—Sen. Ray Peterson (R-Powell), Sen. Fred Baldwin (R-Kemmerer), and Sen. Anthony Bouchard (R-Cheyenne)—passed the bill without a single reference to the vast body of peer-reviewed research that guides actual medical professionals in their interactions with patients.

Having zero background in psychology or any related field, the committee members presumed to know with certainty that forcing doctors to offer “nonviable birth certificates” would provide women who miscarry comfort. This is despite having been presented with oral and written testimony by a nearly a dozen women who had experienced miscarriages and who said such an offer would have made them feel a range of emotions from awful to infuriated.

Sen. Peterson expressed relief that the women testifying about a situation that occurs literally only to their bodies wouldn’t be so selfish as to talk only about women.

“Golly,” Peterson said upon hearing one woman remark that both she and her husband would have been mortified at being offered a “nonviable birth certificate,” “I appreciate you including the men, because it was hard on me, too [when my wife miscarried].”

Testimony against the bill began Monday morning with Dr. Amanda Johnson, an OB/GYN with a degree from Columbia University who practices in Laramie. Dr. Johnson informed the committee that she has experienced a miscarriage herself, and mentioned that she’s a practicing Catholic.

In ten years of medical practice and an estimated 1,000 lost pregnancies, Dr. Johnson said, no woman had ever asked for or even hinted at wanting a certificate of remembrance.

“I have experienced pregnancy loss and know that Wyoming has great infrastructure, care, and community support—we don’t need this intrusion,” she said.

Dr. Johnson pointed out several unworkable aspects of Boner’s Bill from a medical perspective. For instance, the bill mandates that Wyoming doctors offer a “nonviable birth certificate” to women whose bodies expelled their pregnancies between nine and 20 weeks after conception. Dr. Johnson explained that it’s virtually impossible to tell whether a woman has been pregnant for eight weeks or twelve weeks, and therefore doctors would be unable to determine if, by law, they were required to offer the certificate.

“That’s taken care of in the statute,” Boner said, despite the fact that it clearly is not.

Want to repel doctors? Here’s how.

Dr. Johnson went on to reference Wyoming’s distinct difficulty attracting and retaining doctors. The Bipartisan Policy Center recently found that Wyoming only has 65 primary care physicians per 100,000 residents, compared to a national average of 84. When you look at specialists, the situation is even worse.

Dr. Johnson explained that onerous and ill-informed mandates and legislative meddling into the doctor-patient relationship would further discourage doctors from setting up practice in the state.

“It’s clear that there’s no medical background informing this bill,” Dr. Johnson told the committee, which includes a rancher, a farmer/rancher, a copy machine salesman, and a real estate agent.

Sen. Boner and his colleagues waved away the women, who characterized the bill as “ghoulish” and “invasive,” among other things.

The lawmakers were strangely casual when it came to the finer points of how doctors would actually carry out their new mandate, determine things like sex and pregnancy duration, particularly considering, as Dr. Hinkle put it, that prior to 14 weeks “there’s no baby, just tissue—it would be similar to an appendix or gall bladder.”

Boner even emphasized that doctors wouldn’t have to fill out any kind of paperwork acknowledging that they had offered the “nonviable birth certificate.” So, a doctor wouldn’t even really have to do it, and would only be in trouble if a woman who knew the law turned them in.

So what’s the point of this law—one that Boner said was inspired by his “friend,” but that’s also inspired by a law recently passed in Florida?

At the end of the day, the point is the language—inserting words like “birth,” which implies “baby,” and “unborn child,” which implies legal personhood, into a statutory context and applying them to fetuses and miscarriages.

Anti-abortion activists have for decades been playing the long game, knowing they won’t overturn Roe v. Wade in one fell swoop, and instead strategically chipping away at women’s reproductive rights bit by bit, wherever they can, which is often at the state level.

One main long-term objective is to change the legal language and popular understanding of a fetus so that it becomes an “unborn child”—i.e. illegal to kill.

If Boner’s Bill was about helping grieving families, it wouldn’t apply only to fetuses that had gestated for nine weeks. Losing a pregnancy at six weeks is just as traumatic.

Instead, Boner’s Bill helps draw a line—at nine weeks, according to SF-85, a pregnancy is now an “unborn child” and worthy of a life-affirming certificate. It’s the same kind of distinction between “okay to abort” and “not okay to abort” that fetal heartbeat bills aim at.

This is the type of bill that slips through thanks to the Good Ol’ Boy system in the Legislature. Boner comes up with a “gee whiz” story about his friend, other lawmakers think, “Boner’s a good guy! What’s the harm?” and go along with it—Sen. Stan Blake (D-Green River) was on Better Wyoming’s Facebook page the other day saying just that—and before you know it you’ve got an actual law with actual consequences that doctors and women have to deal with.

It’s also a wild intrusion by the government into doctor-patient relationships during an intensely personal and often traumatic situation.

CLICK HERE to use our quick and easy form to write your local legislators and ask them to vote NO on Boner’s bill.

Senate panel can’t move fast enough to give oil industry a tax break
Scroll to top
Share this ArticleLike this article? Email it to a friend!
Email sent!