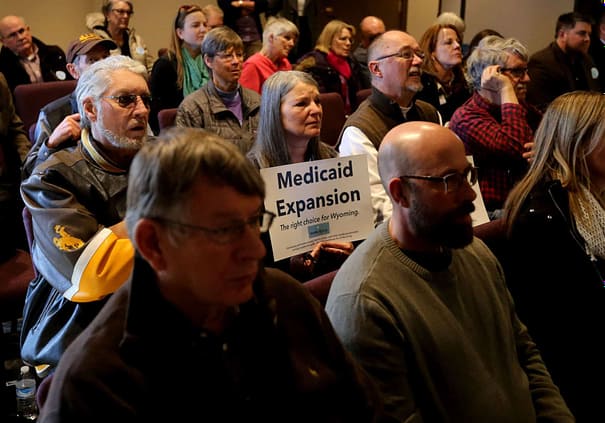 Proponents of expanding Medicaid in Cheyenne.

There are several ways state legislators can vote “no” and convey their disdain for the bill at hand. The most angry and bitter spit out the word quickly when their name is called, indicating how emphatically they oppose the legislation. Others respond with a weary resignation that shows they’re tired of the topic and don’t want to ever vote on it again.

No matter how they expressed themselves during the roll call vote on Friday, the 23 senators who killed Medicaid expansion for the fifth year straight can chalk up one mutual “accomplishment.” In other sessions they spent hours debating the proposal, increasingly drawing the ire of a citizenry upset about their bonehead decision.

But this year they dispatched the bill in only 15 minutes during budget talks in the Senate. The less time Medicaid expansion is in the spotlight, they apparently believe, the likelihood decreases of an opponent or voter bringing it up during a re-election campaign and making them answer for it.

News of the 23-7 vote to kill Medicaid expansion, though, should be shouted from the rooftops and spread like wildfire in communities across the state. People should know their representatives did it again:  They pissed away hundreds of millions in federal dollars, screwed over the working poor, and may end up bankrupting Wyoming hospitals.

By offering a budget amendment to expand the Medicaid program, Sen. Chris Rothfuss (D-Laramie) showed that opponents can’t cite one valid argument to vote against it.

Rothfuss said the two most-often cited reasons for defeating the bill in years prior were:

1) the certainty with which many believed the GOP Congress would repeal and replace the Affordable Care Act, i.e. “Obamacare”

2) the insistence by lawmakers to ensure they weren’t giving any benefits to freeloaders who won’t work.

Well, repeal and replace didn’t happen. And it’s been well documented that the majority of the estimated 20,000 people who could qualify for Medicaid expansion do work—they just can’t afford to buy health insurance because they have one or two or three lousy paying part-time jobs that don’t offer benefits.

No state has experienced disaster by expanding Medicaid

Wyoming, which is about $900 million in the hole, has already refused to accept $500 million in federal dollars. The state’s Department of Health has weathered hundreds of millions of dollars in cuts in recent years, yet still faces a deficit because of Wyoming’s aging population.

“Expanding Medicaid would allow us to accept about $150 million a year moving forward, [plus] cover that vulnerable population,” Rothfuss said.

Sen. Charles Scott (R-Casper) has historically been the biggest obstacle to the state accepting Medicaid expansion. He was still at it Friday, incorrectly maintaining that “it’s a prescription for disaster.”

“You will endanger the financial health of our hospitals, it will increase the cost of private insurance, raise private rates, and more of our people will go across the border to neighboring states,” Scott charged.

Rothfuss pointed out none of that is true.

“Of the states that have expanded Medicaid, the states have not observed a higher cost for their population covered, and they have not had higher premiums. … The hospital receipts at hospitals around the state are refuted by the hospitals themselves who want Medicaid expanded … because they believe it will help their bottom line,” he said.

The poor can get “volunteer health care”

The most bizarre, incoherent opposition came from Sen. Ogden Driskill (R-Devils Tower), who complained that in every state that has expanded Medicaid, more than twice as many people have been enrolled.

Rothfuss said expanding Medicaid to the current estimated enrollees would bring in $150 million a year from the federal government. If, as Driskill foretold, the number of enrollees doubled, Rothfuss noted that would bring $300 million of economic activity to Wyoming “that we won’t have otherwise, for just a few million [paid by the state].” The feds are currently paying 95 percent of the expansion costs, leaving the state to only be responsible for 5 percent.

We hate federal money (if it helps poor people)

Rothfuss said if he told the Senate he could guarantee the state $300 million of economic activity next year and “I didn’t tell you how we were going to do it, but you thought we could have [the money], everyone would vote for it and we’d have a special celebration.”

Sen. Larry Hicks (R-Baggs) had pointed out that Medicaid increases the federal debt.

“The dollars are there,” Rothfuss continued, “the economic development is there, the jobs are there, we improve access to health care, we improve affordable coverage, hospitals support it and the public supports it. It seems like the only group that doesn’t is this very group right here.”

Rothfuss’ colleagues summarily showed their agreement with his assessment by killing the proposal.

Public outcry and dissent from the medical community help kill Boner’s Bi...
Scroll to top
Share this ArticleLike this article? Email it to a friend!
Email sent!