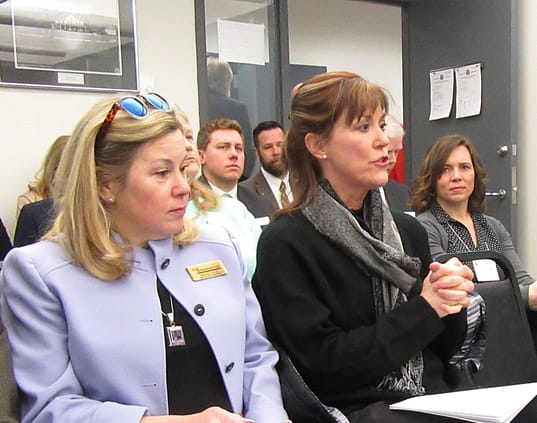 Dr. Rene Hinkle of the Cheyenne Regional Medical Center speaks against Boner's Bill at a meeting of the Senate Labor and Health Committee.

The Wyoming State Senate killed a bill on Tuesday that would have provided “nonviable birth certificates” to women who miscarry pregnancies.

The Senate voted down the measure on its third reading. Senate File 85 was nicknamed “Boner’s Bill” for its sponsor, Sen. Brian Boner (R-Douglas).

Boner’s Bill initially passed through the Senate Labor and Health Committee with a unanimous vote. Sen. Charlie Scott (R-Casper), who chairs that committee, shut down testimony on the measure after droves of women who had experienced miscarriages—including prominent healthcare professionals—arrived to speak against it.

But public outcry steadily grew as more and more Wyomingites found out about the proposal. In turn, more and more Senators shied away or outright opposed the bill as it proceeded through its first and second readings last week.

By Tuesday, lawmakers had heard enough from voters and the medical community and killed the bill with a 12 – 18 vote.

On Friday, Boner’s Bill was the subject of considerable discussion.

Several Senators noted that they had received lots of feedback on the bill from their constituents. The feedback, they said, was overwhelmingly against the proposal.

“Ten to one, people who talk to me about this bill are opposed,” said Sen. Cale Case (R-Lander).

Boner accused “outside groups” on Friday of mischaracterizing his bill. But he also contradicted himself when he apologized to his fellow Senators and their constituents for misleading them. Boner had repeatedly claimed to his colleagues and the public that his initial proposal would have made the certificates voluntary, even while it clearly would have forced doctors to offer women the certificates.

Boner had also erroneously claimed that his bill had the implicit support of Wyoming’s medical community, since the Wyoming Medical Society had remained neutral at the initial committee hearing on this bill.

“Universally, medical professionals are opposed to this bill.”

After a three-day weekend, lawmakers reconvened on Tuesday and defeated Boner’s bill.

Boner had offered an amendment to the bill on second reading that removed the mandate for doctors to offer the certificate to women. The amendment passed, but that wasn’t enough to placate the bill’s critics.

Several Senators noted on Tuesday that, over the long weekend, they had spoken with medical professionals back in their districts.

Sen. Bill Landen (R-Casper) noted that two of the state’s top hospitals are in his district. The healthcare professionals he spoke with there vehemently opposed the bill.

“But that’s not the only reason I’m against this,” Landen said. “I also get heartburn every time [the Legislature] gets into the doctor-patient relationship.”

In his closing plea for support on the bill, Boner claimed that he had coordinated with the medical community in the process of creating his bill.

But Boner then bashfully referenced an email sent to lawmakers Monday night from the Wyoming Medical Society. In the email, the group representing healthcare professionals stated that it had changed its position on the bill—from “neutral” to “opposed.”

No new anti-choice laws this year

Many Wyoming citizens and groups opposed Boner’s Bill in part because it was a sly attempt to nudge state law toward grating fetuses the rights of a person. This subtle shift is a long-term tactic by anti-abortion activists, since making a fetus legally a person would effectively make the procedure illegal.

Boner’s Bill was the only proposal this Legislative session that threatened women’s reproductive rights. Last year, however, two anti-abortion bills were signed into law. One new law forces doctors to offer women who were seeking abortions information designed to change their minds. The other bans “selling baby parts”—a reference to a debunked video about Planned Parenthood.

Reproductive rights advocates like Sharon Breitweiser, executive director of NARAL Pro-Choice Wyoming, were clearly relieved after Tuesday’s vote that they had reversed the trend … at least for now.

The Legislature’s education funding debate is on track for public school ...
Scroll to top
Share this ArticleLike this article? Email it to a friend!
Email sent!