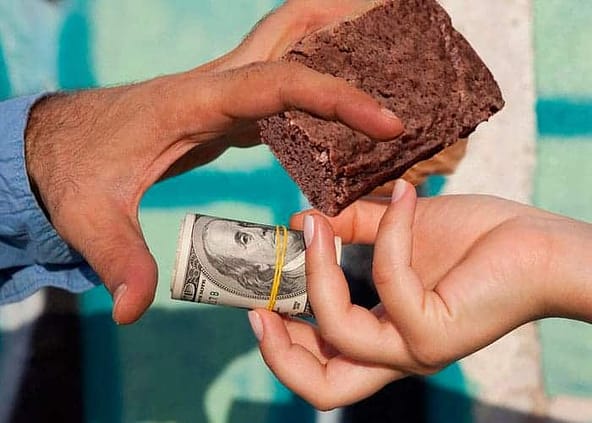 One of thousands of back-alley weed brownie deals going down each day in Wyoming.

The Wyoming Legislature can move in slow and mysterious ways.

Plodding along, though, doesn’t mean the laws being crafted are any good.

A case in point: Legislators have spent three years working on a bill to define penalties for possessing non-plant forms of marijuana—i.e. edibles, tinctures, liquids, etc.

All they have to show for it is Senate File 23, an extremely flawed bill that promises to pack more people into Wyoming’s overcrowded prisons on marijuana convictions.

Waiting for that “chronic” edibles bill to come around

The Joint Judiciary Committee submitted separate edible pot bills to the House and the Senate. Like throwing spaghetti at a wall—or drug charges at a young person—they hoped something would stick.

House Bill 16 failed its introduction vote. It was laughed out of that chamber with a 10 – 49 vote.

With that kind of overwhelming opposition, it’s difficult to see how SF-23 could pick up enough support to win passage in the House, even though the Senate approved its bill 19-11.

Perhaps like a stoner refusing the schwag and holding out for the homegrown chronic being passed around the party, the House just prefers the Senate version and is waiting for SF-23 to come to its chamber.

But that’s not likely.

Laws dumber than a bong-ripping pre-teen

If the Senate bill dies in the House, it would be a victory for the should-be non-criminals out there who consume marijuana in various non-plant forms—and anyone else who thinks it’s stupid, harmful, and wasteful to put people in jail for weed.

It would also be a victory for taxpayers who don’t have to pay to keep people locked up, along with … well, basically everyone.

All of the proposed legislation put forth in Wyoming in recent years has been dumber than a bong-ripping pre-teen, because it determines penalties not according to how much actual illicit chemical is contained in an edible, but how much the edible itself weighs.

Wyoming’s chapter of the National Organization for the Reform of Marijuana Laws (NORML) originally worked with the Joint Judiciary Committee and law enforcement on a compromise effort, but bailed early on when the group realized most legislators were still interested in using total liquid amounts and brownie weights to determine sentence length.

Loopholes that anyone can exploit … even while high

Under SF-23, a person could be put in prison for a year and face a $1,000 fine for a first-offense misdemeanor possession charge of:

The weight would include the ingredients besides cannabis used to make the treat.

Sen. Chris Rothfuss (D-Laramie) told the Senate that, while the bill was intended to close some loopholes in state law, it instead opened up some that weren’t in previous edible weed proposals.

“The bill creates several new and fun loopholes that can be exploited by anyone—even while high,” he said.

One of the main problems with the Senate bill is that it counts the weight of the substance that is used to transport it. There is no attempt made under Wyoming law to determine how much THC (the active ingredient that gets one high) in that proverbial pot brownie that is legally bought, say, at a Colorado dispensary and taken to Wyoming to be consumed.

Sen. Cale Case (R-Lander) pointed out that edible marijuana sold in packages in Colorado is labeled with the THC amount listed.

But Sen. Leland Christensen (R-Alta), chairman of the Senate Judiciary Committee, said content labels are not necessarily accurate and would not stand up in court. Christensen said he’s basing his opinion on meetings he’s had with “scientists, doctors, and crime lab professionals” that he didn’t name.

Rothfuss said while the process to determine THC content is expensive, the measurements are scientifically accurate and the technology has existed for 50 to 60 years.

“The idea that we can’t do this when, for example, we can tell the concentration of certain gases on a star 100 million light years away—it’s absurd,” Rothfuss said.

The weed brownie kingpins of Wyoming

Leave it to Sen. Dave Kinskey (R-Sheridan) to make the most ridiculous comment during the debate. He said even if SF-23 becomes law he doesn’t expect more people to get locked up.

“The police are busy, the sheriffs [office] is busy, the prosecutors are busy; they’ve got no interest in sending people to prison for a brownie,” Kinskey said. “And you won’t get a conviction out of a jury.”

So why, Sen. Kinskey,  have you and other tough-on-crime legislators spent three years on a law that you admit no one wants to enforce?

“If it’s brownies in these sorts of [criminal situations], it’s because there are brownies and there’s large volumes of them and it’s clear the person is a dealer,” Kinskey said.

There you have it. The primary benefit of SF-23 is that it will finally unshackle Wyoming law enforcement and liberate them in their pursuit of the weed brownie kingpins of Wyoming.