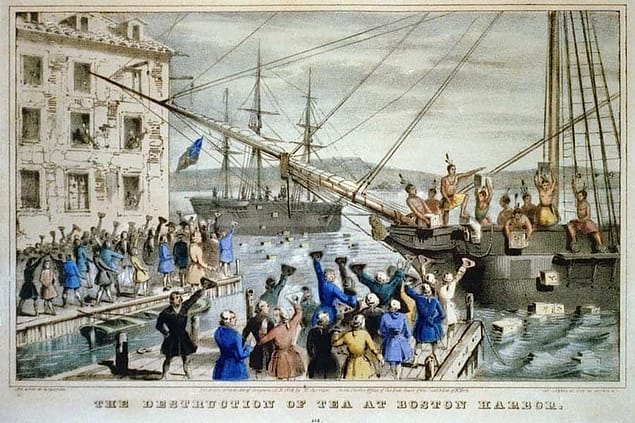 Rep. Charles Pelkey (D-Laramie) pointed out that the East India Tea Company would have loved using SF-74 to arrest the patriots who carried out the Boston Tea Party protest of 1773.

The saga of Senate File 74 is not over yet. The controversial ALEC-written bill to severely punish pipeline protestors like those at Standing Rock with decade-long prison sentences and $100,000 fines passed first reading in the House on Wednesday night after a “colorful” debate.

The bill will be read and voted on twice more in the House—on Thursday and Friday—before it passes or fails. Opponents of SF-74 are encouraged to call and leave a message with their House Representative asking them to vote “No”: 307.777.7852

“There’s actually a lot in this bill that I like,” Barlow said. “But when I amend it, it’s going to look like the Easter Bunny vomited in here. Pink and yellow everywhere.”

Barlow was referring to the bright colored paper on which lawmakers print proposed amendments and different versions of bills circulated on the floor by legislative staff. The way a bill is amended on the chamber floor often makes or breaks it.

It’s already been a long, strange trip for SF-74, which passed the Senate 25-5. When the bill hit the House Minerals Committee earlier this week, however, it died on a 4-4 vote.

But not really. It didn’t stay dead because oil lobbyists and powerful Senators pressured the committee members who voted “No” after the meeting, and Rep. Bill Henderson (R-Cheyenne) announced that he wanted to change his vote to “Yes.” Conveniently, committee chairman Rep.Mike Greer (R-Worland) had conveniently stalled on officially turning in the vote, allowing the committee to re-vote.

The committee’s special meeting to re-vote the next morning—at which no discussion or public testimony was allowed—was the type of political farce one normally associates with Stalinist Russia.

“If industry doesn’t get their way,” Powder River Basin Resource Council lobbyist Jill Morrison told WyoFile, “they’ll change the rules, twist the arm to try and get it through.”

Rep. Dan Zwonitzer (R-Cheyenne) early in the debate Wednesday night offered an amendment to lower the maximum fine against organizations that “aid or encourage” pipeline protestors, from an insane $1 million down to a slightly less insane $100,000. The amendment passed.

“This bill does not in any way reflect Wyoming, Wyoming values, Wyoming needs. …This bill is not ours. Just vote it down today,” Connolly said.

Rep. Charles Pelkey (D-Laramie), an attorney, said existing Wyoming statutes cover what the bill sponsors want. He added that the bill attacks some of the fundamental principles on which the United States was founded.

“Looking back in history I’m sure the East India Company would have appreciated this infrastructure bill in Boston Harbor,” Pelkey quipped. He explained that SF-74 would have prohibited the protest known as the Boston Tea Party.

Rep. Jim Byrd (D-Cheyenne) said he was concerned with the bill from the beginning, and then heard from industry that SF-74 was a direct response to the Standing Rock protests.

“Industry did not like [Standing Rock],” Byrd said. “So the result of this is to truncate your First Amendment rights.”

“I’ve had to choke back the tears at the [sight] of my rights being trampled right in front of my eyes,” Larsen said. “I hope that my emotions will hold as I venture to discuss this in further detail.”

Barlow, after making his Easter Bunny comment, pointed out that pipelines are not the only things in the country deserving of protection.

Rumors of a budget deal suggest no deep cuts to public schools this year
Scroll to top
Share this ArticleLike this article? Email it to a friend!
Email sent!