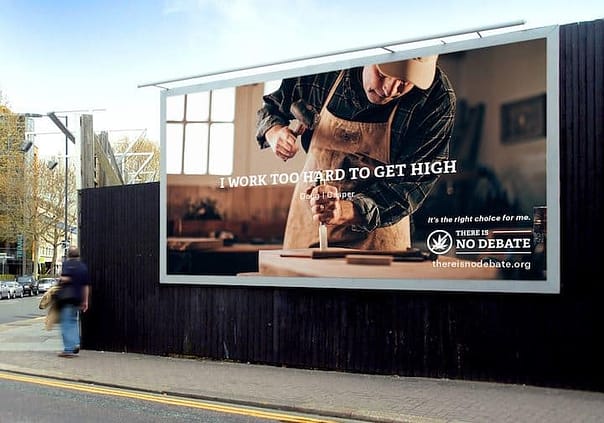 Wyoming police lobbyists have gone public with their anti-cannabis crusade.

Strong majorities of Wyomingites believe that medical marijuana should be legal and that penalties for possessing small amounts of the drug should not include jail time.

Nevertheless, it remains illegal in Wyoming for sick people to treat their illnesses with cannabis, and a conviction for simple marijuana possession can result in a full year in jail.

In fact, lawmakers have tried during each of the past several legislative sessions to increase Wyoming’s marijuana penalties.

What accounts for this disconnect?

The answer is typical: A powerful special interest group holds sway over the Wyoming State Legislature and has convinced lawmakers to go against the people’s wishes.

Who is holding Wyoming back from sensible marijuana reform? No group is more responsible than the Wyoming Association of Sheriffs and Chiefs of Police (WASCOP) and its merry team of lobbyists.

“There is No Debate”

Good policy is shaped through debate. Back-and-forth exchanges between people of differing viewpoints, thoughtful conversations, and sharing information are all critical to the process of determining our laws.

Bad policy, on the other hand, results when informed debate doesn’t take place, when people’s voices are silenced, and when back-room deals—rather than open discussion—dominate the process.

Perhaps it’s fitting, then, that WASCOP’s new statewide anti-marijuana campaign is titled—no kidding—“There is No Debate.” Its slashed-through marijuana leaf logo makes sure you don’t miss its crystal-clear point.

You may have seen a billboard driving south through Casper on I-25 warning you about the evil devil leaf. Or perhaps you heard that anti-cannabis author Ben Cort was speaking in a town near you. Both are part of the “No Debate” campaign’s coordinated approach to change Wyomingites’ minds about marijuana.

This public push is a curious move for an organization with such a forceful lobbying presence at the Wyoming capitol. WASCOP’s “inside game,” as its known in the politics business, is among the strongest among all the lobbyists circling the Legislature. Police lobbyists don’t have much real need to mobilize the public. They know Wyoming lawmakers are terrified of appearing “soft” when it comes to law enforcement. They watch legislators fall all over themselves to make sure WASCOP-supported bills get prime consideration.

For instance, despite having no apparent grassroots support, the Legislature has repeatedly seen proposals over the past several years to criminalize “non-plant” forms of marijuana (edibles, etc.), thanks to WASCOP’s urging. At the same time, WASCOP has worked hand-in-hand with legislators like Sen. Leland Christensen (R-Alta) to derail attempts to reform cannabis laws.

So why would an organization that commands such authority in the halls of power launch a PR campaign to attract average Wyoming Joes to its side? The most likely answer seems to be that WASCOP feels its grip on the issue slipping. It knows that lawmakers can only defy majorities of voters for so long.

Wading into the public debate by announcing, “There is No Debate,” might seem like an strange approach.

But then again, cops are accustomed to telling people what’s what.

The “No Debate” website is meant to be a clearinghouse for information about the dangers of marijuana.

As other states legalize medical and recreational marijuana and reduce penalties for cannabis crimes, the WASCOP website tells you all you need to know about why Wyoming should instead continue to crack down hard on weed.

“There is little evidence that [cannabis] use itself increases criminal behavior.”

Ironically, tucked in among a slew of links to the National Institute on Drug Abuse is one of the only Wyoming-specific documents on the website: a 2016 report commissioned by Governor Matt Mead on “marijuana impact.”

The governor’s report begins by citing a survey that found 72 percent of Wyoming residents support legalizing medical marijuana, while 62 percent disagree with putting people in jail for simple possession. (These numbers have increased since then.)

The people of Wyoming do not, by and large, support recreational legalization. But the governor’s report is explicit in explaining that marijuana is not likely the cause of many of the health- or crime-related problems WASCOP would pin on the drug.

Citing research by the RAND Corporation, the report states: “Although the literature showing a relationship between marijuana use and crime is extensive, there is little evidence that use itself increases criminal behavior, so one would not expect legalization to have important effects on nondrug crime.”

On the other hand, the report indicates that medical marijuana would be a net positive for Wyoming, providing folks treatment options that are currently illegal.

“There is considerable evidence supporting the idea that various constituents of marijuana could be useful in treating a wide variety of disorders,” its authors state. “There is little doubt that if medical marijuana were available in Wyoming, some individuals would experience a degree of symptom relief after using it.”

WASCOP’s staunch anti-cannabis stance is not only out of step with the Wyoming public—it also contrasts with law enforcement attitudes nationwide.

Cops tend to be more conservative and punitive than your average citizen, which proved true in this case. Nationwide, about half of the general public supports recreational legalization, while an additional 15 percent supports legalized medical (roughly 85 percent total).

But the Pew study and other data show a clear trend in which even police increasingly think that marijuana policies are currently too harsh.

The police group Law Enforcement Against Prohibition (LEAP) is on one end of the spectrum. It views the War on Drugs as a complete failure and wants to end it.

WASCOP would be on the opposite end, clinging to the lost war like a fallen comrade breathing his last breaths.

Rank-and-file cops in Wyoming are almost certain to fall everywhere on the spectrum in between.

If only Wyoming had more police officers like Capt. Peter Christ (retired), co-founder of Law Enforcement Against Prohibition (LEAP)

The definition of insanity

A LEAP board member and retired police lieutenant told the Washington Post that she’s not surprised police officers have more conservative attitudes than the public on cannabis.

“Law enforcement continues to represent an outlier view on this issue because police are trained with outdated, unscientific, drug-war-oriented materials,” she said.

WASCOP’s insistence that “There is No Debate” about Wyoming’s need to criminalize cannabis affirms her point.

A phrase often misattributed to Albert Einstein says that the definition of insanity is to do the same thing over and over again and expect different results.

Regardless of who said it, 40 years of harsh marijuana penalties in Wyoming has contributed to a skyrocketing prison population, high rates of recidivism, and overburdened local jails. According to a study by the Human Rights Watch, Wyoming arrests more people per capita for drugs than nearly any state in the nation.

“Law enforcement continues to represent an outlier view on this issue because police are trained with outdated, unscientific, drug-war-oriented materials.”

Meanwhile, cannabis use hasn’t declined in Wyoming, and as WASCOP and many of its acolytes in the Legislature remind us, the potency of marijuana has only increased. The War on Drugs hasn’t worked.

And neither will the “No Debate” campaign. Scare tactics and one-sided narratives about drugs—from Reefer Madness to “Just say ‘No’” to “This is your brain on drugs”—have never, ever in the history of the United States decreased drug use or abuse. “No Debate” involves a slick marketing firm, polished billboard photography, social media, and celebrity authors. But it’s really the same old, tired story.

What “No Debate” does help us understand, however, are the forces working against sensible marijuana reform in Wyoming.

Is Wyoming ready for Colorado-style legalization of recreational marijuana? Probably not. But people here are growing impatient watching folks in other states treat illnesses with cannabis, knowing that sick people in the Cowboy State can’t do the same. And they’re tired of watching people’s lives wrecked for possessing a plant that’s legal on the other side of our southern border.

By jumping out in public and announcing, “We’re the ones fighting marijuana reform in Wyoming,” WASCOP has actually done the state a favor. Now it’s easier to see why—despite overwhelming support for medical marijuana and against jailing people for possession—Wyoming’s laws remain among the harshest in the nation.

Knowing where the problem lies is the first step to solving it.

Exit Interview: Kathryn Lenth — How to lose a computer scientist (VIDEO)
Scroll to top
Share this ArticleLike this article? Email it to a friend!
Email sent!