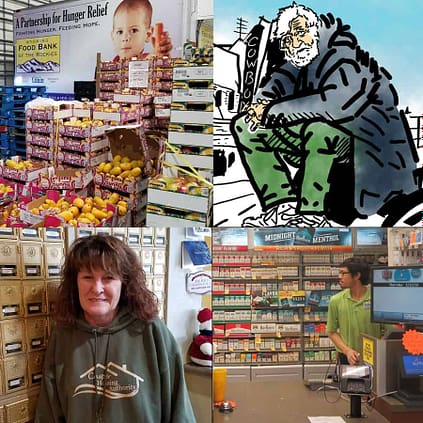 Over the next several weeks, Better Wyoming will publish a series of articles, “State of Insecurity,” that examines shortcomings in the ways Wyoming deals with homelessness, hunger, and low wages. This is the series introduction.

Find all the articles from the series here.

What’s the difference between living and surviving?

In a word: security.

Our culture is filled with heroes from movies and novels who get by on the outskirts of society and are somehow nobler for it. The mythic Wyoming cowboy, for instance, roams the plains and sleeps where he lies, subsisting on the barest of rations. He occupies himself with occasional honest work, thwarting bad guys, and seducing landowners’ daughters.

In reality, malnutrition and hunger were rampant in the Old West, as were homelessness, sickness, and poverty. The same forms of insecurity exist in Wyoming today.

In our new series, “STATE OF INSECURITY,” Better Wyoming looks at three issues that prevent our friends and neighbors in Wyoming from living full lives, and instead force them to merely survive.

We begin with housing insecurity. The size of Wyoming’s homeless population is unclear, because our state agencies have never been very good at counting them. At the same time, a “homeless” person in Wyoming is often not the stereotypical unwashed man beneath a bridge. Countless people in Wyoming who cannot afford a place to live sleep in their cars, in cheap motels, or “couch surf” in the homes of friends and relatives. 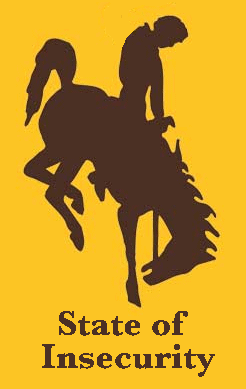 What is clear, however, is that unlike other states, Wyoming has failed to develop public infrastructure to coordinate anti-homelessness efforts and meaningfully confront the problem.

In 2015, Wyoming Governor Matt Mead rolled out a ten-year comprehensive plan aimed at eradicating homelessness. But almost simultaneously, mineral tax revenues slumped and social services were cut across the board, neutralizing his effort.

Wyoming’s unwillingness to fund anti-homelessness infrastructure also results in the state missing out on federal funding, as well as resources from the private sector.

So, the few programs across the state that do work against homelessness—even effective ones like Casper’s “Housing First”—remain disconnected, dependent on charity, and ultimately inadequate.

The problem of food insecurity looks a lot like the housing issue. We have a better idea of how many people in Wyoming don’t know where their next meal is coming from—roughly one in eight—but we also lack a coordinated approach to fixing the problem.

Wyoming is the only state in the nation that does not have a “food policy council”—basically, an official group of people well-versed in confronting hunger who develop plans for the state to work against the problem in a systemic way.

Wyoming’s “food stamps” program has the lowest participation rate among eligible people of any in the nation.

So, the programs that do provide food for Wyoming’s needy are mostly nonprofit, charity outfits that work alone and compete for resources. Some are more effective than others.

The Food Bank of the Rockies, for instance, is one of the biggest anti-hunger operators in the state. But much of the food the organization distributes comes from Colorado. So, whatever’s not canned or freeze-dried ends up rotting before it can reach the far-flung people who need it.

The other option for helping people get food, of course, is providing them public resources to simply go to the store and get it. But Wyoming’s SNAP—or, “food stamps”—program has the lowest participation rate among eligible people of any in the nation.

Even so, the Wyoming State Legislature continues to pass and pursue new laws aimed at “welfare fraud” and enacting “work requirements” that make it even more difficult for hungry folks to get help.

Wages: Too low to live

It might be shocking to learn that many people in Wyoming faced with housing and food insecurity are not unemployed. They simply work low-wage jobs, often part time, and almost always without benefits.

Of states that have minimum wages, Wyoming’s is tied with Georgia’s for the lowest. Even full-time workers who make minimum wage in Wyoming fall below the federal poverty line. The same is true for households with two full-time minimum wage earners, especially if they have children.

Higher wages would provide people more disposable income to spend in their communities.

According to the Wyoming Bureau of Labor Statistics, most people earning minimum wage in the state are over the age of 24, and many are seniors. Minimum-wage jobs tend to be those traditionally held by women. These include food service jobs that are “tipped” and therefore allow restaurants to pay an even lower minimum wage, as well as exposing workers to wage theft.

The Wyoming State Legislature has repeatedly refused to raise the state’s minimum wage. Despite the fact that higher wages would provide people more disposable income to spend in their communities, lobbyists for the convenience store and service industries have convinced lawmakers that higher wages would be bad for local economies.

But legislators might not be hard to convince, given their common derision of poor people. Legislative discussions about the minimum wage and other poverty-related topics are consistently peppered with lawmakers’ comments characterizing the working poor as essentially losers and lowlifes looking for “handouts.”

Until the people of Wyoming demand that our lawmakers have different discussions about poverty, hunger, housing, and wages, we are sure to remain a State of Insecurity.

Uncoordinated, underfunded, and inadequate: Wyoming’s approach to homelessness...
Scroll to top
Share this ArticleLike this article? Email it to a friend!
Email sent!