In this multi-part series, STATE OF INSECURITY, Better Wyoming looks at housing, food, and wage insecurity in the Cowboy State. Read all the series’ articles here.

Wyoming and Delaware have roughly the same number of homeless people.

But Delaware receives more than $7 million a year from the federal government to combat homelessness, while Wyoming gets less than $300,000.

That’s because the Department of Housing and Urban Development (HUD)—the federal agency that funds anti-homelessness efforts—prefers to give money to states whose programs are coordinated and well organized. 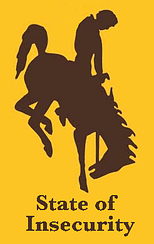 A survey of anti-homelessness efforts in Wyoming finds basically the opposite.

There are certainly hard-working, well-meaning people in Wyoming trying to make sure their neighbors have roofs over their heads. But Wyoming lacks the infrastructure other states have built to ensure everyone is working together. As a result, the few programs that do exist in Wyoming are uncoordinated, disengaged from potential resources, and ultimately inadequate.

And, spoiler alert: While anti-homelessness efforts in Wyoming receive only a paltry amount of federal HUD funding, the State of Wyoming contributes essentially nothing.

No point of entry, little coordination

Wyoming’s HUD field director, Lyle Konkol, said Wyoming has received a failing grade from his federal employer for at least the past two decades.

To apply for funding, HUD requires each state to offer a “Continuum of Care” for homeless people—that’s wonky bureaucratic-speak for a system of infrastructure that coordinates homeless services and connects people to the resources they need.

As federal funding slips through Wyoming’s fingers, our state’s homeless population falls through the cracks.

For example, Konkol said, if a homeless veteran shows up at a shelter but needs mental health care, there should be a centralized intake process that refers him to the VA Hospital instead of just pointing him to a cot.

Likewise, if a person needs substance abuse treatment, or family services, or just some short-term housing, Konkol said a “coordinated entry point” should exist to guide them toward what they need. As this person begins to get back on their feet, the “Continuum of Care” should provide an ongoing way to connect them with subsequent resources, like job training.

Unlike most states, Wyoming doesn’t really have a system like that in place.

And as federal funding slips through Wyoming’s fingers, many of our state’s homeless population continue to fall through the cracks.

How Delaware cares for vets

A broad and coordinated “Continuum of Care,” according to HUD, promotes a community-wide commitment to ending homelessness. Federal HUD funds go to nonprofit providers, state and local governments, and city public housing authorities.

The ideal coordinated program would quickly re-house homeless individuals and families to minimize their trauma and dislocation, and then promote access to resources like job training that allow folks to work toward self-sufficiency.

In Delaware, for instance, there exist multiple HUD-funded programs aimed at helping military vets. These include housing subsidies, a drop-in center that can connect veterans with education opportunities, as well as programs that actively work to secure vets permanent supportive housing.

Delaware’s homeless vet center and housing subsidies receive financial support from HUD, as well as from $10 million in tax credits granted by the Delaware state government.

Nothing comparable exists in Wyoming.

With little state involvement, most of the homeless programs in Wyoming are run by charity-based nonprofits. This, in itself, creates obstacles.

“Unfortunately, most of the nonprofits can only do what their board of directors tell them to do in terms of providing the services with the limited resources they have,” Konkol explained. “It’s hard to get them engaged with other programs because they’re all struggling for resources.”

“Most of the nonprofits can only do what their board of directors tell them to do with the limited resources they have.”

State lawmakers have taken a few stabs over the years at establishing a “Continuum of Care” to coordinate these nonprofits. But efforts have been poorly organized and lacked resources.

Most recently, in 2012, Gov. Matt Mead decided to make the Wyoming Department of Family Services (DFS) responsible for leading the state’s efforts to build an effective “Continuum of Care.” But the recent budget slump dashed hopes that it would be adequately funded.

In 2015, Gov. Matt Mead announced a ten-year plan to address homelessness. His announcement coincided with a budget slump and subsequent funding cuts for social services.

Konkol said the ephemeral nature of charity nonprofits—which launch efforts and shut them down depending on funding—also hurts Wyoming’s ability to secure HUD money. If one anti-homelessness effort goes under, federal funds decrease until another takes its place.

“It would take some money to get there”

Without stable investment by the state—whose ability to provide stable funding is often thwarted by its reliance on boom-and-bust mineral revenues—it seems unlikely Wyoming will be able to build the infrastructure it needs.

Even the basic steps of ensuring nonprofits and agencies work together require staffing and equipment.

“It would take some money to get there,” Konkol said. “[DFS] is working on that, but it also takes computer systems and putting policies and procedures in place and getting the nonprofits to engage.”

Meanwhile, homelessness in Wyoming has been on the rise.

A strong return on investment

An investment by the state to build infrastructure for anti-homelessness efforts would likely yield significant returns.

Agencies like the Casper Housing Authority are already operating programs according to HUD’s best practices. They are also good at leveraging public money to raise substantial funds from the private sector.

“We haven’t gotten a lot of support at the state level … Well, we haven’t had any.”

Recently, the CHA applied for and received $480,000 from the Casper’s fifth-cent tax monies for its Housing First program.

“With that money we leveraged $9 million in private funds,” said Kim Summerall-Wright, the CHA’s executive director.

But when asked if the state provided any funding to the CHA, the director was quiet for a moment. “We haven’t gotten a lot of support at the state level,” she said. Then she paused again. “Well, we haven’t had any.”

Investing in infrastructure for anti-homelessness efforts would empower agencies and nonprofits to raise their own private funding, and it would also open up the federal coffers at HUD for more support.

In the end, this would result in the ability to build a coordinated program to connect the resources in Wyoming that are already available and develop new ones. Eventually, we would end up with fewer people sleeping in their cars, on friends’ couches, and in the streets.

Give Ed a place to live: “Housing First” works in Wyoming — STATE...
Scroll to top
Share this ArticleLike this article? Email it to a friend!
Email sent!