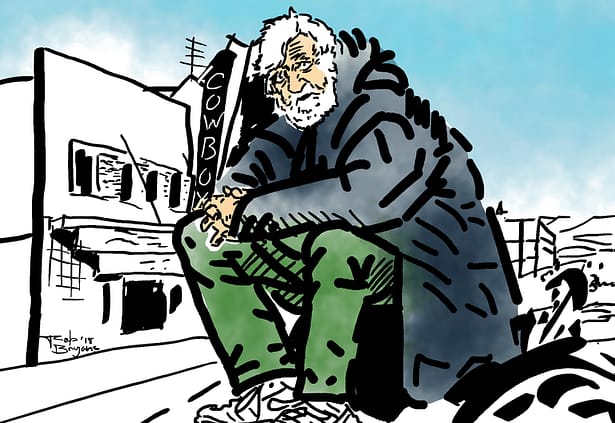 In this multi-part series, STATE OF INSECURITY, Better Wyoming looks at housing, food, and wage insecurity in the Cowboy State. Read all the series’ articles here. [Illustrations by Robert Bryans]

Ed was once one of Casper’s most well known residents, but not because he was popular. Far from it.

“He’s been banned from every public building in the city,” said Kim Summerall-Wright, director of the Casper Housing Authority. “He scared people—he would scream at someone or threaten them wherever he went.”

“Ed” (not his real name) is a disabled veteran in his 60s who lived on the streets of Casper for about 12 years. Summerall-Wright said it’s not unusual for the city’s most chronic homeless to have nowhere to live for that long.

But living on the street for even a month without money or food is unbelievably stressful.

“Mentally they start to deteriorate and their anti-social behavior escalates,” the CHA director said. “You just go into kind of a survival mode.”

Give Ed a place to live

People become homeless for lots of reasons. Mental illness, domestic violence, substance abuse, losing a job, getting injured, and family crises can all play a role.

Often, it’s a combination of one or more misfortunes.

Summerall-Wright said there are many misconceptions about the homeless, who are routinely—and often wrongly—accused of being lazy or unwilling to work. Sneering down your nose at a person like Ed and telling him to “get a job” seems ludicrous—not to mention cruel.

So what do you do with someone like Ed, a veteran who served his country but is physically disabled, suffers from mental illness, and has a substance abuse problem or two?

As more and more anti-homelessness advocates across the nation are figuring out, the answer is simple.

Just give Ed a place to live.

About 18 months ago, Ed started living in an apartment as part of the CHA’s Housing First program. The agency helped him get his disability status from the Department of Veterans Affairs, which allows him to pay his portion of the monthly rent—30 percent, for those who have an income.

Housing First should not be a radical new concept, but it is. For as long as anti-homelessness programs have existed, they have often offered help, but with strings attached—a person must go to church or prove they’re looking for a job or test negative for drugs in order to keep a roof over their head.

One of the main reasons for Housing First’s success is that tenants are not required to jump through any hoops. They just get a place to live, and figure things out from there.

That idea might be hard to handle for people who believe the only way to get out of poverty is to pull yourself up by your bootstraps. But the concept behind Housing First is simple: If you give a person a place to live where they won’t have to fear being kicked out, wonderful transformations in their life can, and often do, take place.

It’s not that Housing First programs don’t involve drug treatment programs or help with job searches. But those things come later, after a participant has a bed to sleep in, a place to bathe, and the chance to start eating nutritious meals.

Today, thanks to Housing First, Ed gets along with his neighbors. He shops by himself and prepares his own food. Those are significant improvements in his life, and they’re likely laying the groundwork for more.

“Reintegrating into society is learning what’s acceptable and what isn’t,” she added. “That’s really the first step. It’s not as easy as, ‘Why don’t you go get a job?’”

Pendleton told Better Wyoming that he once thought street people panhandled because they were lazy.

“I used to tell the homeless to get a job, because that’s all I thought they needed,” he recalled.

But Pendleton, who’s an official in the Church of Jesus Christ of Latter-day Saints, changed his tune when the church asked him to coordinate food pantries, emergency shelters, and other charities across the country. Pendleton said he realized, “These are my brothers and sisters. When they’re hurting, we’re hurting as a community. We’re all connected.”

Pendleton studied up on various approaches to homelessness. In 2003, he convinced the Utah governor, conservative state legislature, and several private foundations to take a chance on funding “Housing First.”

In its pilot project, 17 of Salt Lake City’s most chronically homeless—who had been on the streets an average of 25 years—were provided apartments they could stay in as long as they wanted. Except for one tenant who died, they were all still in the program 21 months later.

The program thrived. By 2015 the state’s chronically homeless population dropped an astonishing 91 percent. Positive news accounts across the country—including a comic segment on “The Daily Show”—carried the idea to other states.

If a Housing First tenant cannot immediately kick their alcohol or drug addictions, at least they are not getting loaded in the street. Drinking in the alleyway often leads to contact with the police, which places a financial and personnel burden on law enforcement and costs the entire community.

There are cheaper and better ways than jail to provide people three hot meals and shelter.

The possible savings in Wyoming directly related to housing the chronically homeless—instead of letting them fend for themselves on the streets—is difficult to quantify. But the national Interagency Council on Homelessness (ICH) estimates that Housing First annually saves between $30,000 and $50,000 per individual in reduced emergency shelter, health care, and law enforcement costs alone.

There are cheaper and better ways than jail to provide people three hot meals and shelter.

Another study showed that Housing First can cost $23,000 less per year, per individual compared to a shelter-based program.

Wyoming does a notoriously poor job of counting its homeless population each year, so it’s hard to know exactly how many men and women are chronically sleeping in the streets. But even conservative estimates suggest the state could save considerable money by working harder to get folks like Ed into Housing First programs.

Success in Casper … and beyond?

Housing First came to Casper via former City Manager John Patterson, who had worked with Lloyd Pendleton in Utah.

When Patterson transferred to Casper in 2011, he brought the Housing First concept with him and recruited Summerall-Wright to run the program.

“I saw the amazing results it had reducing the number of homeless in Utah and I knew we could do it in Wyoming,” Patterson said. He helped get the program off the ground in Casper before he retired in 2015.

The first phase was renovating about 20 units in the dilapidated Star Apartments in downtown Casper, which is now called CenterPoint.

Summerall-Wright said CHA adds about 20 chronically homeless people to the program each year at CenterPoint and other apartments throughout the city.

Pendleton said Casper’s model could be duplicated elsewhere in Wyoming with the cooperation of state and local governments.

“We were very collaborative and compassionate about our homeless citizens,” Pendleton said. “We came together with a common vision and got the funding repurposed by the state and got them into housing.”

But as Better Wyoming showed in Part 1 of this series, a lack of investment by the state hampers anti-homelessness efforts across Wyoming. If the state were to invest, advocates would be much more likely to see success in securing federal Housing and Urban Development dollars, as well as private funding.

Wyoming’s lack of mental health and substance abuse services fuels homelessness...
Scroll to top
Share this ArticleLike this article? Email it to a friend!
Email sent!