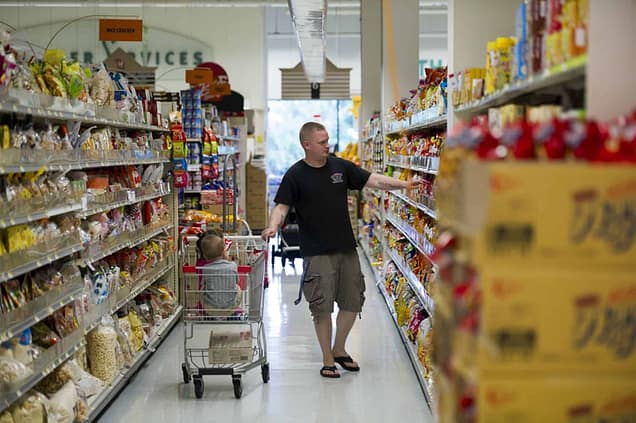 Even though roughly 13 percent of Wyoming’s residents don’t consistently know where their next meal will come from, less than 7 percent receive help from “food stamps.”

That’s the lowest Supplemental Assistance Nutrition Program (SNAP) participation rate in the nation, in terms of needy folks who don’t take advantage of it.

As a result, Wyoming loses out on about $33 million a year in federal food stamp benefits that could be going to hungry people.

And, of course, it results in Wyoming people staying hungry.

The average SNAP recipient in Wyoming gets $119.41—roughly $4 per day. This is about $6 a month less than the national average.

“You can get as little as $10 a month. I would have to be starving to fill out that much paperwork.”

Wyoming has signed up only 59 percent of its eligible SNAP recipients, which means the state has an estimated 23,000 residents who qualify for benefits but don’t receive anything.

And many people who do receive SNAP benefits get far less than the state’s monthly average.

“Just because you qualify for SNAP doesn’t mean you’re going to get very much—you can get as little as $10 or $12 a month,” said Christine Porter, a University of Wyoming associate professor who specializes in food and public health. “I would have to be starving to fill out that much paperwork.”

Throw in mandatory work requirements, plus the need to re-qualify if your monthly income changes at all, and it is easy to see why food stamps might involve more red tape than many Wyoming residents are willing to deal with. 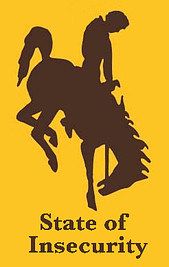 Because of the state’s low participation rate, Wyoming ranks 53rd in the amount of federal SNAP dollars it allocates—about $48.5 million annually. We fall behind all 50 states, plus the U.S. Virgin Islands and Guam.

According to the Food Research and Action Center, three states—Illinois, New Mexico, and Oregon—have 100 percent participation from their eligible population. These states have different numbers of “food insecure” people, but they’ve managed to get them all signed up for SNAP help.

Meanwhile, only about six in 10 Wyomingites who qualify for SNAP benefits actually receive them.

Why don’t more people eligible for the program sign up here? Boiled down, the official response from Wyoming SNAP is “we don’t know.”

But others have some ideas. In short, they deal with stigma and paperwork.

“Wyoming is ‘pull yourselves up by your bootstraps’—that’s one reason,” said Jamie Purcell, executive director of Food for Thought in Casper. “I think another is people eligible for SNAP are already so tapped out by justifying the need [by proving their income] that having to justify the need one more time might be too many times.”

Porter has a related guess.

“It’s probably harder to use a SNAP card without everybody in your community knowing you’re doing it,” she said. “You go into a grocery store and you know the people in front of you, the people behind you, and the cashier. It’s hard to do it privately. People may want to use SNAP but they may not want to deal with the paperwork and that extra type of stigma.”

Yet another reason for Wyoming’s low participation rate might be that the Wyoming Department of Family Services (DFS) does not have a program to inform people about SNAP.

“If the agency is not actively looking at reasons participation is so low, they may not have any idea about why that’s the case.”

DFS does have a website and Facebook page to inform eligible individuals about what it offers, but you’d have to look to find them. And DFS provides information and SNAP applications at other social services agencies and community partners.

But according to Ed Bolen, an analyst at the Center on Budget and Policy Priorities who specializes in SNAP issues, it’s entirely possible that DFS doesn’t know why participation is low and isn’t interested in doing much about it.

“If the agency is not actively looking at reasons participation is so low, they may not have any idea about why that’s the case,” Bolen said.

Other states boost their rates

Bolen said other states have found ways to improve their participation rates.

In 2016, California had only 70 percent of its eligible participants signed up for SNAP. But its “CalFresh” program has been working at the county level to increase awareness and participation.

For instance, San Bernardino County is using self-service kiosks and staff members for a “one-stop shop” at the entrances of county offices to help enroll people.

That’s not to say Wyoming should replicate these efforts, but there are many more ways of informing people of SNAP other than a website and Facebook.

Some large Wyoming households qualify to receive hundreds of dollars from SNAP, while some individuals can receive less than $20 per month.

“Someone making $900 a month on Social Security is only going to get $15 in food stamps.”

Andi Barker, SNAP’s Wyoming program manager, said the amount of the benefits is determined by a household’s income and eligible deductions, such as shelter or medical expenses.

“Houses that do receive the federal maximum allotment typically have zero income or their eligible expenses far exceed their income,” Barker explained.

Victoria Ziton, community development manager of the Food Bank of the Rockies, said it’s not surprising that some SNAP benefits are so low, particularly for seniors on fixed incomes.

“Someone making $900 a month on Social Security, I can almost guarantee you that they’re only going to get $15 a month in food stamps,” she said.

Ziton said it’s important for all eligible people to sign up for SNAP, because qualifying for the program makes it easier to qualify for assistance from food pantries and other hunger relief agencies.

This may be true. But in Wyoming, many rural places don’t have a food pantry or other relief agencies.

Wyoming residents must work at least 30 hours per week to receive SNAP benefits. There are exceptions to this rule—children, seniors, students, and disabled people all get a pass.

Of course, the people who receive exemptions are typically viewed as the most needy. But the requirements rule nevertheless can threaten benefits for the “working poor” who struggle to make ends meet with crappy, unstable, low-paying gigs.

If someone is deemed “able-bodied” but can’t find a job, they are limited to three months of food stamps over a three-year period. DFS will try to help them get work, but if the people can’t manage, they’re out of luck.

Barker, the Wyoming SNAP director, said 44 percent of recipients live in households that have “earned income,” which doesn’t include things like Social Security or disability.

If these people lose their jobs or their hours get chopped, they won’t only lose their income, but also help from SNAP in getting food to eat.

Food meant to feed Wyoming’s hungry often goes to waste — STATE OF ...
Scroll to top
Share this ArticleLike this article? Email it to a friend!
Email sent!