The Senate Corporations Committee killed a bill on Tuesday night that would have imposed a corporate income tax on “big box” stores like Walmart. It would have generated tens of millions of dollars each year for Wyoming public schools.

The committee considered House Bill 220 over the course of two meetings. During the first meeting, last Friday, a stream of corporate lobbyists and anti-tax activists testified against the proposal. They claimed it would be a “job killer” and complained that, since the tax would only target huge corporations with more than 100 shareholders, it was “discriminatory.”

People who spoke in favor of the bill noted that the Wyoming Legislature has cut hundreds of millions of dollars from its budget in recent years—including more than $100 million from education funding. But lawmakers have failed to figure out new sources of revenue to free Wyoming from the boom-and-bust cycle that results from our dependence on mineral taxes.

During the second meeting, the committee deliberated among itself. Only Sen. Charlie Scott (R-Casper) openly opposed the proposal. But he commended the thought and work of the bill’s sponsor, Rep. Jerry Obermueller (R-Casper).

In the end, however, committee chairman Sen. Bill Landen (R-Casper) said that the committee’s decision wouldn’t matter. Even though the bill had passed the House by a wide margin, staunch opposition to it had built up in the Senate.

“Knowing the fate of this bill across the hall [in the Senate], we’ll set this aside. I’m not going to ask for a motion” to vote on the bill, Landen said.

With that procedural move, he killed the corporate “big box” tax.

Praise for the soon-to-be dead

Before they killed HB-220, the committee voiced an awful lot of support for it.

“Most people who email you against it haven’t thought about it for five minutes.”

Sen. Cale Case (R-Lander) explained that he is an anti-tax Libertarian, and that he “will vote for any budget cut that’s in front of me.”

But since the Legislature had not managed to balance its budget, Case said, he felt obliged to seriously consider new forms of revenue. He said he supported HB-220 because it was a very “narrow tax.” He pointed out that it would be “peanuts” to the huge corporations it would target.

Case said that most of the anti-tax opposition to the bill that he’d heard was uninformed.

“I support the tax and I’m catching hell for it,” he said. “But most people who email you against it haven’t thought about it for five minutes.”

Case also expressed no sympathy for the companies the tax would affect. He said that Wyoming has “become a colony” to corporations.

“The face of Wyoming’s Main Street is changing” with more and more corporations replacing small businesses, he said. “[This transformation] has sucked the life out of our traditional Main Street.”

Corporations have “sucked the life out of our traditional Main Street.”

Likewise, Sen. Landen showed corporations no love, for similar reasons. Mom-and-pop businesses, he said, “were the ones that sponsored the Little League teams. There was always a noticeable lack of support from [corporate] entities. So I was very intrigued by this bill coming forward.”

A spending problem or a revenue problem?

Sen. Landen said he’d heard plenty of opposition to the bill from his constituents. Most opponents, he said, claimed that Wyoming has a “spending problem,” rather than a lack of revenue.

“When people say it’s a spending problem and not a revenue problem, the hair goes up on the back of my neck.”

As a member of the Senate Appropriations Committee for the past two years, Landen said, he played a direct role in the sweeping budget cuts that have affected every Wyoming state agency.

“We went line item by line item and cut $300 million from the budget,” he said. The state’s employment levels, for instance, are at their lowest since 2003.

“Have we tightened budgets? Yeah, we have,” Landen said. “When people say it’s a spending problem and not a revenue problem, the hair goes up on the back of my neck.”

Landen asked, rhetorically, which schools the anti-tax crowd would like to see shuttered. “Which one of those state agencies do you want to close down?”

A lack of options for education funding

Members of Wyoming’s education community said that the Legislature’s unwillingness to implement any new taxes to pay for schools left them little choice but to support HB-220.

Ken Decaria, of the Wyoming School Boards Association, referred to a report published several years ago that laid out a solution for Wyoming’s education funding problem. The “white paper” said Wyoming should cut some funding, change some revenue streams around, and raise some new revenues.

“We can’t turn our nose up at opportunities like this when they come.”

The Legislature has accomplished the first two steps, Decaria said. “But we’ve never figured out new revenue. With a lack of choices, we’re here supporting this one.”

Tammy Johnson, with the Wyoming Education Association, reminded the committee that Wyoming’s constitution explicitly calls on the Legislature to levy taxes to fund public education.

“This is one way to fix the ‘structural deficit,’” Johnson said. “We can’t turn our nose up at opportunities like this when they come.”

She added that the estimated $45 million per year the “big box” tax would generate would fund 600 public school jobs. Public schools, she noted, are the biggest employers in many small Wyoming towns.

It seemed entirely possible that, had the Senate Corporations Committee taken a vote on HB-220, they would have passed it on to the full Senate for debate. It only needed three votes from the committee to advance.

Another committee member, Sen. Wendy Schuler (R-Evanston), said that the first emails she had received about bill opposed it. But more recently, she said, they’d gone in the other direction.

“I’ve heard quite a bit of support for the tax,” she said.

Schuler said she was undecided, but she also recognized Wyoming’s need for new revenues.

But, at last, the corporate and anti-tax lobbyists earned their paychecks. 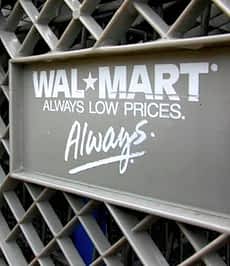 Lobbyists representing Walmart, the National Restaurant Association, Vail Resorts, and AT&T all flew in to speak against HB-220. Several attorneys from Cheyenne-based Holland and Hart publicly opposed the bill, along with representatives from the Wyoming Liberty Group, the Wyoming Restaurant and Tourism Association, the Laramie County GOP, and other anti-tax groups.

These same agents had been working the Senate’s lobbies for weeks, drumming up enough opposition to convince Landen that voting on the bill wasn’t even worth it.

But of any proposal in recent years that attempted to raise new revenues, HB-220 got the furthest. Its sponsor list also includes many lawmakers who hold leadership positions in the Legislature.

Without any other tax proposals on the table, and with few places left in the state budget to “trim the fat,” Wyoming’s revenue problem will undoubtedly remain.

As long as powerful legislators consider a corporate “big box” income tax one of Wyoming’s best options, there’s a good chance it will be back.

Senate committee de-funds hemp bill, making it useless
Scroll to top
Share this ArticleLike this article? Email it to a friend!
Email sent!