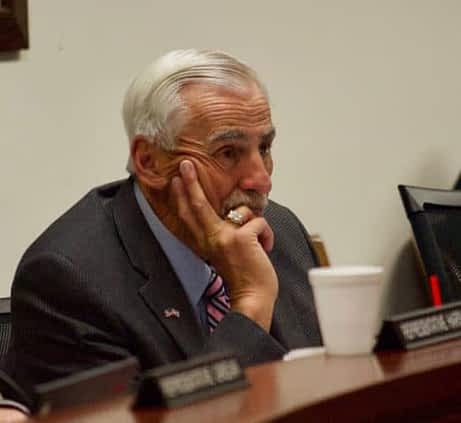 Bebout awoke to news that the tax break he'd tried to give himself and other oil bosses hadn't made it through the night.

In the end, it was all about Bebout. Once he went home, after 10 p.m. on the last day of the 2019 Legislative session, there was no one left to promote his proposed tax break for oil companies.

No one, that is, except Pete Obermueller, an oil industry lobbyist. Obermueller stayed around until after 1 a.m., when Senate President Drew Perkins (R-Casper) stuck his head out of his office door and told a group of House members waiting in the lobby that the Senate lacked the votes to move the bill forward.

Perkins, who was technically the sponsor of Senate File 134, hadn’t even bothered to show up for the conference committee on the bill a few hours earlier. He had left it up to Bebout and Sen. Brian Boner (R-Douglas) to negotiate with House members on amendments that had significantly altered the proposal.

Throughout the duration of the bill’s journey through the Legislature, any time Bebout was in the room, everyone seemed to think it was a marvelous idea. Bebout is among the Legislature’s most powerful lawmakers.

But without Bebout there to leverage his encyclopedic knowledge of the oil industry and strong-handed tactics, few seemed to think that giving oil companies a tax break was really that great of a move.

Or, they didn’t care enough to push for it, anyway. When Perkins said he didn’t have the votes, the bill was postponed indefinitely. The House members shrugged and dispersed, intent on wrapping up a few remaining bills and going home after a very long day.

How much of a break should oil companies get?

The week prior, the House Revenue Committee had adopted a sweeping amendment to SF-134, brought by House Speaker Steve Harshman (R-Casper). It would have dramatically decreased the bill’s benefit for oil companies. 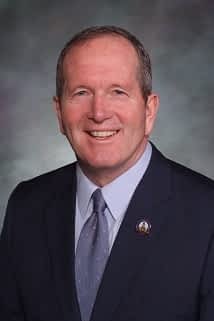 Speaker of the House Steve Harshman

The crux of the bill was that, if oil prices dropped beneath a certain level, the severance tax rate paid on oil produced from previously shut-in wells would decrease, from 6 to 4 percent.

The version of the bill passed by the Senate set the price threshold at $80 per barrel. Oil prices now, based on a six-month rolling average, are just above $60. So, with the Senate’s version of SF-134, the tax break would have kicked in immediately.

Harshman’s amendment lowered the price point to $49. It also lengthened the duration of time a well would have to be shut in before the tax break applied for re-working it.

Finally, the amendment decreased the amount of time companies would qualify for the tax break after they revived the well.

The House largely adopted Harshman’s amendment, with minor changes, when it passed the bill on third reading Wednesday afternoon, with a 37 – 21 vote.

A soft war on the oil industry

The conference committee, which took place just after 9 p.m. on Wednesday night, was meant to hash out differences between the House and Senate versions of the bill.

Lawmakers would turn to Obermueller and ask, “Pete, is that alright with you?”

SF-134 had attracted great attention throughout the session. But because the conference committee meeting took place so late, only two journalists, the oil industry lobbyist Obermueller, and a lobbyist from the Powder River Basin Resource Council, Monika Leininger, were there to witness the action. PRBRC opposed the bill.

Three House members squared off against Sens. Bebout and Boner to negotiate. In absurd—yet typical—fashion, the members from each chamber would discuss an aspect of the bill, and then turn to Obermueller and ask, “Pete, is that alright with you?”

Leininger literally had to raise her hand and wait for the lawmakers to call on her to speak. She argued that there was absolutely no good reason for oil companies to be receiving a tax break right now.

This prompted Bebout, who owns an oil company, to push back. He claimed that Wyoming has been waging a kind of soft war on the oil industry, and that the state is no longer attractive to producers like him.

“There are only 24 wells being drilled right now [in Wyoming],” Bebout said. “We used to have 240 wells drilling before we made the move against oil and gas production in this state.”

Bebout and the other legislators found what they considered an acceptable middle ground between the House and Senate versions of the bill. But when they presented it back to their respective chambers, the House voted it down.

Perkins, the Senate President, had the option to appoint a new conference committee to re-negotiate the bill.

Instead, that’s when he let it die.

Like many bills that come before the Wyoming Legislature, SF-134 was designed to do one thing, but it had much broader implications.

“I strongly suggest that the Legislature partner with oil and gas to put Wyoming back on the map in terms of competitiveness.”

Had it passed in its amended form, SF-134 may not have had much of an impact. But as Bebout and others argued, the bill was really meant to be one small step in the larger project of making Wyoming friendlier to the oil and gas industry.

Presenting the bill to the Senate Appropriations Committee earlier this month, Bebout complained that Wyoming’s severance taxes are higher than other states’, and so are transportation costs. Meanwhile, the fact that lots of drilling here takes place on public land, he said, means that oil companies are subject to heightened regulations. It also means companies must pay a share of their profits to the federal government.

In public testimony before the House Revenue Committee last week, Jonah Energy Government Relations Director Paul Ulrich told lawmakers that Wyoming has fallen behind other oil-producing states. Along with taxes and transportation costs, he said, it also takes longer to receive a drilling permit in Wyoming than it does, for instance, in Pennsylvania.

“I strongly suggest that the Legislature partner with oil and gas to put Wyoming back on the map in terms of competitiveness,” Ulrich said.

Ulrich, Obermueller, and Bebout all reminded lawmakers this session that the oil industry “pays the bills” in Wyoming.

That may be so. But many would argue that Wyoming’s overreliance on the mineral industries has shackled the state to a boom-and-bust economy and stunted the growth of other sectors.

Bebout is not the Legislature’s only oil industry cheerleader. But he’s certainly its most powerful and enthusiastic. When he retires, after the 2020 session, folks like Ulrich and Obermueller will be hard pressed to find anyone who will push as hard and as effectively for their industry as Bebout.

Citizen lobbyists push for commonsense cannabis reform at the Wyoming Legis...
Scroll to top
Share this ArticleLike this article? Email it to a friend!
Email sent!