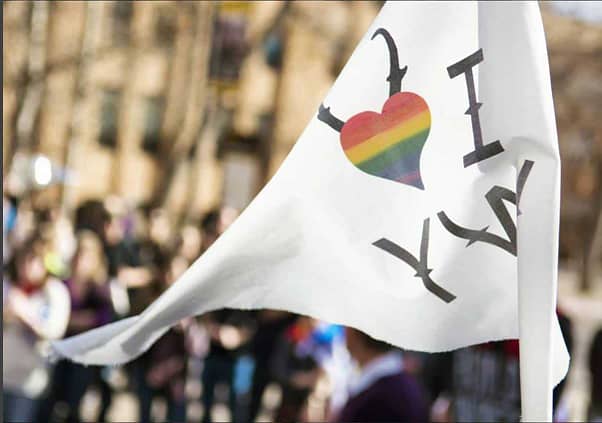 An LGBTQ pride-themed flag designed by the Wyoming Art Party flies during a celebration. Groups throughout Wyoming continue to pursue nondiscrimination policy changes despite legislative setbacks.

Burlingame, who is also the director of the LGBTQ advocacy group Wyoming Equality, said she’s well aware that GOP party leadership is “rabidly fixated” on the issue. 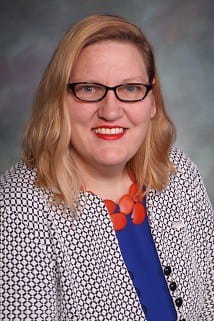 “I’ve always been comforted that their obsession was not shared by the vast majority of the Republicans that I know personally, and the Republicans who are in leadership in the Legislature,” Burlingame told Better Wyoming.

She noted that Senate President Drew Perkins (R-Casper) was one of the co-sponsors of House Bill 230, which would have protected LGBTQ workers in Wyoming from discrimination on the job. Rep. Dan Zwonitzer (R-Cheyenne), chairman of the House Revenue Committee, was the bill’s primary sponsor.

But Burlingame said she didn’t expect fellow legislators to be so beholden to party leaders that they would vote against HB-230 just to avoid retaliation.

During the House Revenue Committee’s consideration of the bill, another freshman lawmaker, Rep. Cyrus Western (R-Sheridan), asked Wyoming GOP Executive Director Kathy Russell if he could expect “punitive measures” from the party for voting in favor of the bill.

Russell, who was providing public testimony to the committee, dodged Western’s question.

“I can’t say anything. I have no knowledge” of what a “future group” of state party members will do, she said.

“So, maybe?” Western replied. He voted against the bill.

HB-230 passed the committee by a 5 – 4 vote. But when the deadline came for bills to be heard on first reading, HB-230 didn’t make it to the House floor for debate. House Majority Floor Leader Eric Barlow (R-Gillette) held it back, and it died on a procedural technicality.

“It’s such a paradox that lawmakers who cherish this image of themselves as these rugged conservative individualists have to march to a pretty strict master.”

Burlingame said she was shocked that House leadership and some committee members caved in to party leaders. She thought threatening to retaliate against legislators for not maintaining party purity was obviously the wrong move.

“I knew [GOP] party leadership was gunning for it hard, but I just thought that our friends would stand up to it,” Burlingame said. “They know in their heart of hearts that discrimination is wrong and that it doesn’t reflect Wyoming values. I just thought they would resent being told what to do.

“It’s such a paradox that the majority party [members] who cherish this image of themselves as these rugged conservative individualists have to march to a pretty strict master,” she added. “Never in a million years did I think my Republican friends would bow and scrape to it so readily. I thought they had more mettle than that.”

Since HB-230 died without a vote in the House, it saved a whole host of GOP lawmakers from having to publicly choose between what they know is right and what their party leaders wanted.

But that didn’t mean the issue of LGBTQ discrimination went away quietly this session.

The same day the House Revenue Committee passed HB-230, a group of high school students from Gay-Straight Alliances around the state were at the Legislature to learn about government and civic engagement.

This included roughly a dozen GSA students from Cheyenne Central High School. Along with their teacher, they approached their local state senator, Lynn Hutchings (R-Cheyenne) to lobby on behalf of HB-230.

They knew Hutchings would likely oppose to the bill. But they couldn’t have imagined Hutchings’ response.

Reports of Hutchings’ comments went viral, highlighting for the nation yet again the problematic relationship Wyoming lawmakers have with LGBTQ rights.

The Legislature’s Management Council has yet to address Wyoming Equality’s informal complaint, despite its leadership pledging that the issue would be addressed at a March 22 meeting. Other, more formal complaints may be forthcoming.

The reactions to Hutchings’ comments has been mixed. Some, like Cheyenne Marion Orr, immediately stood up for the students against Hutchings’ inappropriate remarks.

Hutchings has denied any wrongdoing and claims that she’s the real victim of the situation.

“For our supporters, please know that we will not stop. We will not give up.”

“I have nothing but deep and profound gratitude to the people who spoke out about it immediately,” Burlingame said. “Like Mayor Marian Orr of Cheyenne, who called it out for what it was.”

Burlingame said others, including lawmakers, failed to speak out, hiding behind the claim that this was a he-said, she-said situation.

“But President Perkins said in his statement to WyoFile that there’s really no discrepancy between what Hutchings acknowledges she said and what the students said they heard,” Burlingame said. “So it’s out now and the silence of some of the people who said ‘we’ll wait and see’ is deafening. They didn’t speak out. Now where are they?”

In a separate incident just this week, GSA students at McCormick Junior High in Cheyenne reported widespread harassment and bullying after other students were caught distributing racist and homophobic flyers. The situation is keeping the discussion of nondiscrimination forefront in the news.

Meanwhile a statement released by Wyoming Equality following Hutchings’ comments affirmed that the LGBTQ community and its allies will not back down: “For our supporters, please know that we will not stop. We will not give up,” Wyoming Equality board chairman Kenneth Ingram said. “We are committed to ensuring that all hard-working Wyomingites can share in the freedom to live and work without fear of discrimination.”

Lawmakers fail to figure out new revenues for Wyoming public school funding,...
Scroll to top
Share this ArticleLike this article? Email it to a friend!
Email sent!