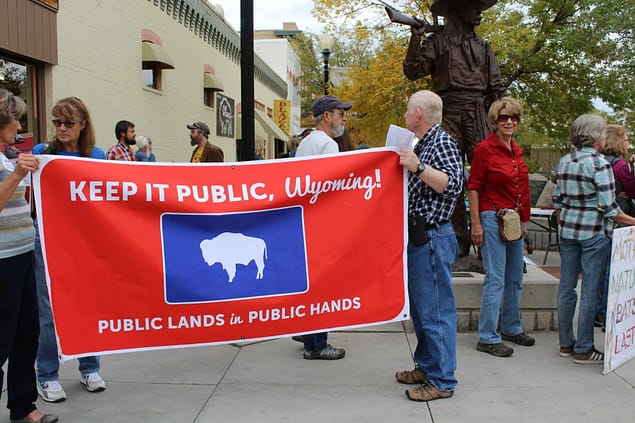 Wyomingites have fought for years against state takeover of federal public lands.

Seizing control over the NEPA process on federal lands would allow Wyoming state bureaucrats to do away with environmental protections and open more federal public lands up to freewheeling mining development.

This new effort has attracted far less attention than previous public land transfer schemes. But it could prove just as harmful.

The last attempt by Wyoming lawmakers to lay the groundwork for transferring federal public lands to the state culminated in 2017. A coalition of sportsmen’s and conservation groups, with the backing of a diverse body of outraged Wyoming residents, led the fight to defeat it.

“Keep Public Lands in Public Hands!” became a rallying cry for people who cherish access to Wyoming’s outdoors and wildlife and don’t want to see mineral-rich parcels sold off to the highest bidders.

Wyoming’s economy and state revenues depend heavily on mineral extraction. As a result, Wyoming state lawmakers tend to give mining companies whatever they want—and Wyoming residents, by and large, tend not to make much fuss.

But the prospect of the state seizing federal public lands and selling them off to mineral companies or wealthy landowners was too much for most Wyomingites to stomach. Their outcry made public land transfer a politically untouchable issue. State lawmakers’ new effort to seize control over the NEPA process is much sneakier. But it would have many of the same impacts.

Gov. Mark Gordon has begun talks with U.S. Department of Interior officials about the state taking “primacy” over the NEPA process. Meanwhile, today in Gillette the Wyoming Legislature’s Joint Mineral Committee is considering the same subject as an interim topic. That means transferring the NEPA process could appear as a proposal during the next Legislative session.

Many state lawmakers who pushed for a wholesale seizure of federal public lands in 2017 were motivated by the prospect of taking over the NEPA process. Chief among them was Sen. Eli Bebout (R-Riverton), who owns an oil company and who was Senate President at the time. Bebout complains regularly about the costs oil producers face in Wyoming when they have to drill on federal public lands.

If lawmakers are able to gain state control over the NEPA process, it will amount to something like “public land transfer lite,” providing mineral companies what they want without lawmakers having to face a strong backlash.

“Once you eliminate the NEPA process, it’s just full-blown development without any environmental analysis.”

Casper resident Bruce Lawson has been a longstanding and vocal opponent of land transfer, attending Legislative meetings as a concerned citizen to speak out.

Lawson speaks from experience: He has been involved in mine permitting in Wyoming for the past 35 years, working with the Bureau of Land Management on environmental analysis.

Lawson said he believes the previous effort to have federal lands transferred wholesale to the state was “a huge smokescreen” for the current attempt to take over NEPA in Wyoming and essentially eliminate it.

“Once you eliminate the NEPA process, it’s just full-blown development without any environmental analysis,” he said.

Cheyenne resident Earl DeGroot began organizing Wyoming sportsmen in response to the 2017 land transfer effort. The Facebook page he administers, Wyoming Sportsmen for Federal Lands, has more than 5,000 followers. DeGroot has also been active at the Legislature as part of the “Keep It Public, Wyoming” coalition, which helped promote a bill to establish an official Wyoming Public Lands Day in 2019.

Earl DeGroot, head of Wyoming Sportsmen for Federal Lands, speaks at a 2017 rally for Public Lands Day in Laramie.

DeGroot pointed out that the NEPA process is currently conducted by federal agencies who take into account a much broader scope of concerns than Wyoming state agents.

“[Federal agencies] represent all Americans,” DeGroot told Better Wyoming. “If all of a sudden the state of Wyoming took over it would be a significant negative to protecting public lands.”

DeGroot noted that no state currently has “primacy” over the NEPA process, in large part because states cannot overtake control over the process on their own.

“They would have to get Congressional approval before this could happen, and that seems highly unlikely,” he said. “In some ways it seems like a waste of time, but [transfer proponents] just aren’t letting this effort go away. We have to take it seriously and respond to it. We can’t just sit on our hands and do nothing.”

Wyoming Sportsmen for Federal Lands helped organize sportsmen to call and email the Minerals Committee in advance of today’s meeting in Gillette.

No resources, no management

The Wyoming Legislature commissioned a report published in 2016 to study the viability of transferring federal public lands to the state. In short, the report stated that it was a bad idea. It particularly pointed to the fact that Wyoming lacks the resources to adequately manage the federal public lands within its borders.

Opponents of Wyoming taking control over the NEPA process echo these concerns. If Wyoming gained primacy over environmental analysis, the job would fall to the state Department of Environmental Quality. That state agency, like all others in Wyoming, has faced dramatic budget reductions and staff cutbacks in recent years, as mineral revenues have plummeted.

“Over time, legislators would begin to erode the [NEPA] process, primarily by cutting funds.”

“Through retirements and people quitting, [the DEQ] has lost 35 to 40 people in just a few years,” Lawson said. “When some have left, those positions haven’t been filled.”

The DEQ would be overwhelmed by the task of monitoring federal lands, he said. And state lawmakers who already complain about the size of the government would be unlikely to provide funding for the necessary increase in staff and resources.

“Over time, legislators would begin to erode the [NEPA] process, primarily by cutting funds,” Lawson said. “I don’t think the state has the people, the resources, and the expertise to do it right now—or ever.”

The problems that would result from the wholesale transfer of federal public lands to the state of Wyoming are relatively straightforward and easy to understand.

“The state of Wyoming is ill-suited to objectively evaluate and balance the many national interests for these lands.”

Transferring control over NEPA, however, is a bit murkier, in part because it’s a highly complex process. This, in itself, is one of the reasons that groups like the Wyoming Outdoor Council oppose it.

“Implementation of NEPA on our federal lands triggers numerous other federal laws, such as those requiring multiple-use management, historic preservation laws, endangered species protection, the Freedom of Information Act and many more,” a WOC fact sheet on the issue says.

NEPA currently involves balancing national and local priorities, as well as informing and engaging the public about potential impacts. The state would not have to do any of this if it took over the process, WOC said.

“The state of Wyoming is ill-suited to objectively evaluate and balance the many national interests for these lands,” the fact sheet said. “We need the national outlook in the NEPA process to protect these lands from short-sighted exploitation.”