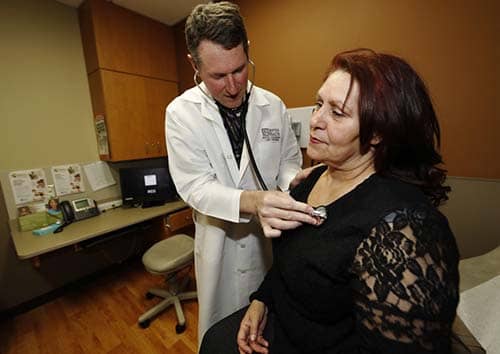 Expanding Medicaid would provide healthcare to tens of thousands of low-income Wyomingites.

Opponents of Medicaid expansion in Wyoming trotted out their tired excuses and bogus information to oppose it for the seventh straight year on Tuesday.

But this time they failed.

The Joint Revenue Interim Committee unexpectedly voted 8 – 5 to support a bill to expand Medicaid in Wyoming, sending it to next February’s Legislative budget session.

The Revenue Committee will sponsor the bill, giving it a much better chance of passing than in previous years, when bills have been sponsored by individual lawmakers, often members of the minority Democratic Party.

The 2020 bill would authorize Wyoming’s governor, state insurance commissioner, and the Department of Health to negotiate with the federal government about a Medicaid expansion plan for the state. If a deal is reached, Gov. Mark Gordon would report to lawmakers why the action would be positive for the state, and the Legislature could be called into special session to consider the plan.

Expanding Medicaid under the Affordable Care Act would bring hundreds of millions of federal dollars into Wyoming and provide health insurance for tens of thousands of low-income residents.

The Wyoming Hospital Association, Wyoming Medical Society, Equality State Policy Center, Wyoming Primary Care Association, and others backed Medicaid expansion at Tuesday’s meeting in Cheyenne, along with a group of more than a dozen University of Wyoming medical students.

Leading the charge against expansion was Evan Blauser of the Wyoming Liberty Group, a self-described “free market think-tank” run by the eccentric billionaire Susan Gore.

Blauser, a young whippersnapper new to Wyoming, is no stranger to hobnobbing with extreme wealth or supporting policies that hurt the working poor. Prior to joining the Liberty Group, he was a staffer for U.S. Representative Roger Williams, of Texas, who’s among the wealthiest members of Congress. Williams receives a dismal 3 percent rating from AFL-CIO for his votes helpful to the rich and harmful to working people.

Blauser’s claim—that people who would benefit from Medicaid expansion already have their own private health insurance—is total nonsense.

On Tuesday, Blauser tried to spook the Revenue Committee with doomsday predictions about the flood of Wyomingites who would swarm to Medicaid if it were expanded, costing the state far more than expected.

He went on to explain that folks simply wouldn’t be able to resist a government handout.

“These people are already paying for their own healthcare coverage, and now the government is essentially telling them that we’ll cover it,” Blauser said. “If I was in that situation, I’m sure I would take that action. Frankly I wouldn’t blame them.”

But, of course, Blauser’s claim—that people who would benefit from Medicaid expansion already have their own private health insurance—is total nonsense. The essential reason to expand Medicaid is because people making poverty wages can’t afford health insurance.

Rep. Tim Hallinan (R-Gillette) trotted out another tired, unfounded excuse to not back Medicaid expansion: the conspiratorial belief that the feds won’t uphold their pledge to cover 90 percent of the costs.

States like Wyoming, which haven’t expanded Medicaid, cover between 25 – 50 percent of the cost burden.

“I think the 50 percent [match] that the state pays for the current Medicaid population is likely to be applied to these Medicaid expansion people in the future,” Hallinan said. “I believe that is an expense the state cannot afford.”

Sen. Fred Baldwin (R-Kemmerer) said the Legislature has been speculating about the federal share decreasing for years. “But I don’t think it’s coming any day soon,” he said.

“Since Medicaid expansion began across the country, overall Medicaid spending and enrollment have evened out. The data is there, and I believe for the future of the state it’s the right thing to do.”

Baldwin, who formerly opposed Medicaid expansion, said what’s convinced him to support it is the impact it would have on hospitals’ uncompensated care, which is hurting their bottom line.

Baldwin said some hospitals are now operating “on the edge, and the loss of [any] will be a significant handicap to the state of Wyoming.” 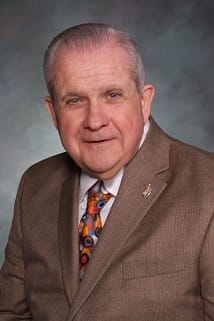 Rep. Pat Sweeney (R-Casper) said as a businessman he initially opposed Medicaid expansion, but now he favors it.

“Since Medicaid expansion began across the country, overall Medicaid spending and enrollment have evened out and are relatively stable,’ Sweeney said. “The numbers support it, the data is there, and I believe for the future of the state it’s the right thing to do.”

Sweeney also referred to the growing number of states whose right-leaning Legislatures have refused to expand Medicaid, only to see it passed via ballot initiative.

“[We don’t want it to] get it shoved down our throats in ways we don’t want for our state,” he said. “It’s coming whether we like it or not.”

After seeing Medicaid expansion fail for seven years straight, some speakers on Tuesday said revisiting it felt like “déjà vu.”

But Rep. Cathy Connolly (D-Laramie) pointed out that the state’s fiscal position had changed dramatically over the past several years, for the worse.

“I think we’re at a new place,” she said. “The situation is very different.”

“Patient access to health care should not depend on families’ ability to sell their homes, cash out their retirement, or fund-raise in the church basement.”

The state’s fiscal experts forecast a loss of at least 4,000 coal mining jobs in the next few years, she said. “Those folks who have lost their jobs are going to need healthcare,” Connolly said. “There’s no two ways about it.”

“This is an opportunity to help those people, our neighbors, in the state,” she continued. “Healthcare is an absolute primary need, and we can do it through Medicaid expansion.”

Meanwhile, Dr. Tracy Haas, a UW instructor, pointed out to the committee that unexpected health issues can impact families just as badly as unforeseen events like mine closures.

“The truth is that any of us could be brought to our knees by a catastrophic diagnosis at any point,” Haas said. “Patient access to health care should not depend on families’ ability to sell their homes, cash out their retirement, or fund-raise in the church basement.”

Wyoming’s economic development disasters
Scroll to top
Share this ArticleLike this article? Email it to a friend!
Email sent!