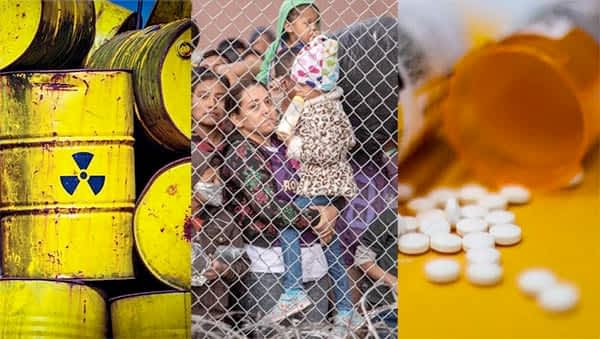 Don't nuclear waste, immigration prisons, and opiods just inspire you to think of growth and prosperity?

As the coal industry plummets—and oil and natural gas don’t seem terribly far behind—Wyoming’s “leaders” have come up with a bevy of bad ideas for new ways to generate economic growth.

These include constructing a nuclear waste dump, building a private immigration prison, and giving away millions of dollars in public money to an opioid manufacturing lab.

This is not to mention many lawmakers’ death grip on the notion that—somehow, some way—coal is going to remain a viable product.

What do nuclear waste, opioids, immigration prisons, and coal all have in common? They’re things no other state wants!

As the author Samuel Western pointed out nearly 20 years ago, Wyoming’s leaders struggle with the fact that wealth doesn’t come from things you dig out of the ground—it comes from people with valuable skills and good ideas.

If we make Wyoming a place that’s more attractive to, say, young people who want to start businesses here, our economy will diversify and grow. On the other hand, if we bring to the state a bunch of poisonous garbage … well, you get what you get.

The imprisonment of Japanese Americans during World War II at internment camps—such as the one at Heart Mountain, near Cody—is generally understood as a shameful chapter in U.S. and Wyoming history.

You’d think we’d be keen to learn from it. 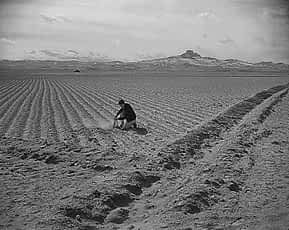 Instead, today, just as 80 years ago, some people in Wyoming are clamoring over the potential economic benefits of locking nonwhite people up.

As word got around in the early 1940s that Wyoming might be a site for an internment camp, officials around the state saw dollar signs.

The feds chose Heart Mountain in Park County, where farmers and a canning company enjoyed the free and/or cheap internee labor.

The rest, as they say, is disgraceful history.

The legacy of Heart Mountain has left a permanent stain on Wyoming. But, today, locking up people who don’t resemble the vast majority of Wyomingites is once again being pitched as an “economic opportunity.”

In southwest Wyoming, Evanston and Uinta County officials are licking their chops at the possibility of landing a for-profit “detention center” that would house people picked up by ICE. For these lawmakers, the promise of a few dozen jobs and some tax revenue in the short term eclipses the fact that—as many Uinta County residents have pointed out—hosting a private immigration prison doesn’t exactly help create a blue-ribbon community.

It’s hard to see where an immigration prison fits among Utah’s plan for “beautiful, prosperous, healthy, and neighborly” communities.

In fact, Salt Lake City, where most of the immigrant inmates would come from to fill Evanston’s prison, wants nothing to do with the project—that’s why ICE is looking at Wyoming.

Meanwhile, Salt Lake City’s economy is booming, along with the rest of the state of Utah. Forbes magazine notes that Utah’s success is largely due to an “unprecedented public effort aimed at keeping Utah beautiful, prosperous, healthy and neighborly for future generations.”

It’s hard to see where among “beautiful, prosperous, healthy, and neighborly” an immigration prison might fit.

Wyoming lawmakers also fail to consider history in their attempt, once again, to make the state a nuclear waste dump.

Wyoming residents have previously said loud and clear that they do not want toxic nuclear fuel rods transported and stored here. In the early 1990s, when politicians like current Wyoming State Senator Eli Bebout (R-Riverton) promoted the creation of a storage site for nuclear waste in Fremont County, a poll found that 80 percent of Wyomingites opposed the idea. This helped convince then-Governor Mike Sullivan to reject the idea in 1992.

The Wyoming Outdoor Council noted when the idea reemerged in the late 1990s that storing nuclear waste could damage the state’s tourism industry.

But just like a spent fission rod, this bad idea just won’t go away. Last summer, Sen. Jim Anderson (R-Casper) brought forward a plan to store nuclear waste in abandoned uranium mines in the Gas Hills and Shirley Basin. He claimed that the project could net Wyoming … wait for it … a cool $1 billion a year! This amount would wipe out the state’s entire budget shortfall and put Wyoming on easy street.

Upon further review, lawmakers learned that a facility such as Anderson envisioned would bring in, at most, $10 million. They also found out that such a project could go forth without the legislature—it would simply need the governor’s approval.

Investment in the opioid epidemic

All of these things help attract and retain people with skills, education, and the wherewithal to help build new businesses and grow and diversify the economy.

Wyoming, on the other hand, tends to prefer simply handing over millions of dollars to corporations.

By 2017, opioid overdoses were already killing nearly 50,000 Americans per year.

Perhaps the grossest example of this practice dates back to 2017, when Wyoming’s State Loan and Investment Board—chaired at the time by then-Gov. Matt Mead—approved a “stimulus package” worth $23 million for Cody Laboratories.

This corporate welfare was made even more problematic by the fact that Cody Laboratories earned its profits by manufacturing opioids. In 2017, when Wyoming approved Cody Labs’ $23 million “stimulus package,” the opioid epidemic was already sweeping across the country, killing hundreds of thousands of people and capturing headlines nationwide.

Cody Labs had planned to undertake a massive expansion in 2018. Instead, as the opioid crisis deepened, the company didn’t add any jobs, laid off 50 people, and its parent company, Philadelphia-based Lannett Company, announced plans to sell it. Cody Labs shuttered its operations last summer.

Thankfully, all this took place in time for the state to scrape its “stimulus package” back off the table. Today, the massive warehouse that formerly housed Cody Labs is under development by rapper Kanye West, who plans to use the space to manufacture Yeezy sneakers and apparel.

Laws of attraction and repulsion

Everyone knew in 2017 that opioids were responsible for widespread death and misery. So why did Wyoming agree then to spend tens of millions of dollars propping up an opioid manufacturer?

People across the nation are sickened by ICE’s practices of separating families, ignoring sexual abuse of children, putting kids in cages, and nurturing a culture of racism in law enforcement. Why, then, would Uinta County be so hot to welcome an ICE facility?

All of these so-called “economic development” projects are repulsive, and actively work against Wyoming’s ability to attract and retain people who can help diversify our economy. This includes, first and foremost, the thousands of young people born and raised in Wyoming who flee the state each year.

If Wyoming wants to diversify and develop its economy, it should focus its efforts on building communities where people desire to live, instead of desperately jumping on each pile-of-garbage opportunity that passes our way.

Medicaid expansion would lower Wyoming’s state healthcare spending
Scroll to top
Share this ArticleLike this article? Email it to a friend!
Email sent!