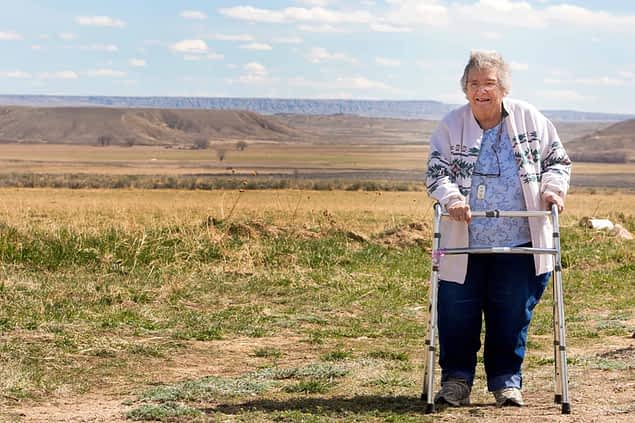 Wyoming's rural hospitals struggle to care for people like Beverly Kolacny, who lives on a ranch near Powell. Medicaid expansion would provide resources to rural hospitals and clinics in Wyoming for better healthcare.

Rural hospitals and clinics are the bedrock of Wyoming’s statewide healthcare system.

Our sparse population relies on facilities like those in Kemmerer, Evanston, and Douglas so people don’t have to travel hours out of state every time they need medical treatment.

But even with limited staff and services, Wyoming’s rural hospitals operate on razor-thin budget margins. That’s because all medical facilities have “fixed costs”—baseline expenses they must cover—and hospitals that serve small, rural populations don’t generate much revenue.

In fact, more than 70 percent of U.S. hospitals that have closed in the past decade are in states without Medicaid expansion.

That’s because Medicaid expansion offers outsized benefits for rural hospitals and medical clinics. Deep-red states like Kansas, Missouri, and Oklahoma have all begun to realize that if they want to save rural healthcare in their state, they need to expand Medicaid.

With a Medicaid expansion bill sponsored by its Joint Revenue Committee, the Wyoming Legislature in 2020 will have the chance to save ours, too.

Medicaid expansion would provide two direct, major benefits to Wyoming’s  rural hospitals and clinics. It would decrease their “uncompensated care” costs—the losses hospitals incur when they provide treatment to people who can’t afford to pay—and it would increase funding for mental health and substance abuse treatment.

Both of these benefits to hospitals would also help decrease Wyoming’s overall state spending on healthcare.

Medicaid expansion includes federal funding for mental health and substance abuse treatment. So, expanding the program in Wyoming would at once decrease the state’s budget burden and help rural hospitals provide care.

Hospitals pay for those to poor to pay

When these folks get sick, many end up seeking treatment in hospital emergency rooms. The hospitals cover these losses in part with their reserves, in part with help from the state, and by increasing medical costs for everyone else.

“We’re seeing more people at rural hospitals either with no insurance or they’re underinsured.”

“We’re seeing more people at rural hospitals either with no insurance or they’re underinsured,” he said. “They have huge out-of-pocket expenses or deductibles that are put on the backs of providers to collect, because a lot of people don’t have that money.”

Expanding Medicaid would provide healthcare coverage for many of the uninsured people whose treatment hikes up Wyoming hospitals’ uncompensated care costs.

“Other states that have expanded Medicaid have seen that amount [of uncompensated care] decrease significantly,” Boley said. In many states, expanding Medicaid has cut these costs in half.

As uncompensated care costs, state budget cuts, and other factors drive down rural hospitals’ revenues, administrators are forced to make tough choices—including what services they can continue to provide in a community.

“Can we really be everything they want us to be and provide everything they think they need?” Boley said. “For the most part, almost every department in a hospital is a loss leader. There are just a few specialties where you can actually make some money to help subsidize the others.”

Because they lack resources and operate in isolated areas, rural hospitals also have a difficult time attracting and retaining quality physicians.

This is especially true since Wyoming state budget cuts have eliminated programs to help young physicians pay off student debt.

“There used to be several million dollars we could apply for [from the state] for loan repayments to recruit doctors, but that money has gone away and hasn’t been replaced,” Boley said.

Furthermore, in order to recruit physicians who have the option to practice elsewhere, Wyoming hospitals often have to pay sign-on bonuses and provide doctors other perks.

“We’re paying higher salaries in a lot of cases, compared to other states,” Boley added.

Working for a healthy Wyoming

By easing rural hospitals’ budget pressures, Medicaid expansion would give rural hospitals resources to provide better and more diverse services to their communities, attract and retain quality physicians, and do it all while the federal government picking up 90 percent of the tab.

To Boley, the potential benefits to Wyoming’s rural hospitals are clear, which is why he and others who are part of the Healthy Wyoming coalition are working to convince lawmakers to pass the Joint Revenue Committee’s bill.

“I would like to see it advance and give the governor an opportunity to look at innovative ways to expand Medicaid,” he said. “We really feel it could help with some of the situations we’re facing around the state, and in the long run it would help an underserved population that needs coverage.”

Proposal would help stop corporations from sucking profits out of Wyoming
Expanding Medicaid would drive down people’s healthcare costs across Wyom...

FIVE FACTS: The National Corporate Profit Recapture Act
Scroll to top
Share this ArticleLike this article? Email it to a friend!
Email sent!