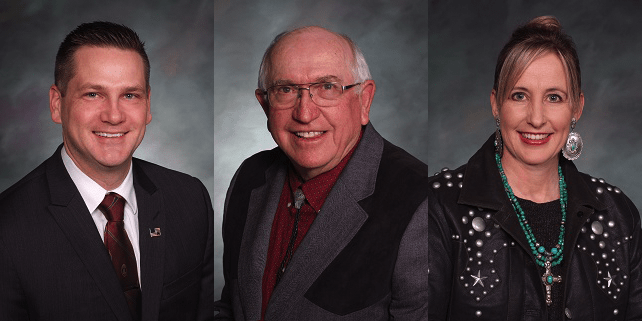 The “Human Heartbeat Protection Act,” which would outlaw nearly every abortion in Wyoming, is one of three anti-choice measures that the Legislature voted to consider during the first week of its 2020 budget session.

Senate File 131 barely passed the two-thirds threshold for introduction, 20-10 (check out the “votes” tab to see if your local state senator supported it). The bill would ban abortion after an embryo or fetus has a “detectable fetal heartbeat.”

“We are extremely disappointed that we fell one vote short of stopping SF-131 on introduction,” said Sharon Breitweiser, executive director of NARAL Pro-Choice Wyoming. “This is the most extreme anti-abortion bill we have seen in the Wyoming Legislature for many years. It is a six-week ban, outlawing abortion before many women even know they are pregnant.”

SF-131 continues the legislative assault on women’s reproductive rights that began in 2017, which saw the passage of the first two anti-abortion bills the Legislature approved in nearly three decades.

Sen. Bo Biteman (R-Ranchester), SF-131’s sponsor, had a catchy little ditty to promote his proposal on the Senate floor: “If a heartbeat is detected, it says a child’s life must be protected,” he chimed to his colleagues Friday.

“This is the most extreme anti-abortion bill we have seen in the Wyoming Legislature for many years. It is a six-week ban, outlawing abortion before many women even know they are pregnant.”

But of course, there are also full-grown women’s lives at stake when it comes to unwanted pregnancies.

“Making abortion illegal forces desperate women to self-abort or seek illegal, possibly unsafe abortions where they may risk their health or even their lives,” Breitweiser said. “This bill would harm the women and families of Wyoming—real people with unique circumstances who would be deprived of their ability to make the decision they think is best for them.”

No, it’s not a heartbeat

According to SF-131, abortions would be banned in Wyoming after “standard medical equipment” could detect “cardiac activity or the steady and repetitive rhythmic contraction of the fetal heart.”

But in a recent statement, the American College of Obstetricians said it’s not clear at all.

“While contemporary ultrasound can detect an electrically induced flickering of a portion of the fetal tissue at about six weeks gestation, structurally and in function, a fetus’ heart develops over the entire course of pregnancy,” the doctors said.

In other words, it’s not a heartbeat that’s detected.

A law meant to be challenged

Similar so-called “heartbeat bills” have been passed in several states. But many have been overturned by judges citing Roe v. Wade.

North Dakota was the first state to pass such a law, in 2013, and it was later struck down in court. Legislators in Wyoming proposed a similar measure that same year, but it died in committee. 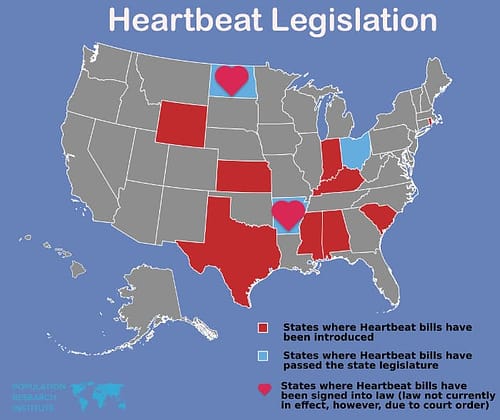 Recently, more and more states have passed “heartbeat bills” precisely because they run afoul of Roe v. Wade. By flaunting the landmark court case’s prohibition of laws that restrict abortion access during the first trimester of pregnancy, they set up what anti-abortion activists hope will be a fight they can win in the U.S. Supreme Court.

In the meantime, if SF-131 passes it will be certainly challenged in court, and the state of Wyoming will be forced to cover the legal costs.

Hallmark arguments for a cookie-cutter bill

In addition to the “heartbeat bill,” Biteman also sponsored a proposal this year to ban use of taxpayer funds for lobbying, a model bill written by the American Legislative Exchange Council (ALEC).

On the Senate floor, Biteman employed a tug-at-the-heartstrings approach Friday to win votes, with statements that might belong on an embroidered pillow or Hallmark card, but had nothing to do with his bill.

“Nothing melts the heart like holding your child or grandchild for the first time,” Biteman told the Senate. “That tender touch, that feeling of overwhelming love, joy, fear, and responsibility that comes with being a parent to a little human being—that is the most powerful mix of emotions we will ever feel in life.”

“NARAL Pro-Choice Wyoming, our members, and our supporters will continue working to defeat this alarming bill as it progresses, and to convince more of the senators to oppose the bill,” Breitweiser said.

Meanwhile, two other anti-abortion bills were approved during the opening week of the 2020 budget session.

By a 43-16 vote, the House approved introduction of House Bill 197, sponsored by Rep. Richard Tass (R-Buffalo). It would establish a 48-hour waiting period between when a woman asks for an abortion and when her doctor can perform the procedure. (Check the “votes” tab to see if your local representative supported the measure.)

A similar bill sponsored by Tass passed the House in 2019, but it died in the Senate Labor, Health, and Social Services Committee when Sen. Charlie Scott (R-Casper), the chairman, declined to bring it up for a vote.

Waiting periods are onerous for all women, but they are especially difficult for low-income women, working women without sick leave, and rural women who must travel long distances to the only two abortion providers in Wyoming.

Other waiting period bills have been defeated in Wyoming over the years.

Breitweiser noted that waiting periods are medically unnecessary and onerous for all women, but they are especially difficult for low-income women, working women without sick leave, and rural women who must travel long distances to the only two abortion providers in Wyoming, both in Teton County.

The other bill, Senate File 97, “Born Alive Infant-Means of Care,” was introduced in the Senate by a 22-7 vote.

Sponsored by Sen. Cheri Steinmetz (R-Lingle), it requires physicians to perform life-saving measures on any infant born alive after an attempted abortion.

But Wyoming doctors perform abortions on fetuses, not infants. Steinmetz’s bill, like Biteman’s, is a bandwagon attempt to stir up the culture wars over “late-term abortions” rather than a solution to any actually existing issue in this state.

Wyoming doesn’t have late-term abortions, but a bill to govern them advances anyway
Wyoming House kills bill to create new school funding source, will instead spend...