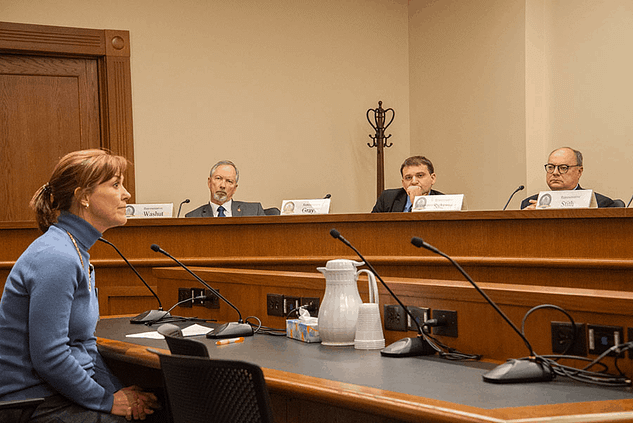 Rene Hinkle, a Cheyenne OBGYN, listens to a question from the Judiciary Committee while Reps. Art Washut, Chuck Gray, and Tim Salazar look on.

Watching a legislative committee consider an anti-abortion bill Tuesday was like tuning into a bad TV re-run.

Viewers may have wanted a different outcome, but it was basically a repeat of last year’s show: same bill, same audience, same pro and con arguments.

Even the same 6 – 3 vote by the same legislators on the House Judiciary Committee advanced House Bill 197, which mandates a 48-hour waiting period before a physician can perform an abortion.

The bill now moves to the House floor for debate.

The only thing different was the location: Last year’s drama took place in the sterile temporary capitol at the Jonah Business Center, and this year it was in the renovated real deal.

It didn’t add much to the effect.

A gift no one wants

Unsurprisingly, Tass did not get the idea for this bill on his own. Many states require doctors to wait certain amounts of time between when a woman requests and abortion and when the procedure can be done. 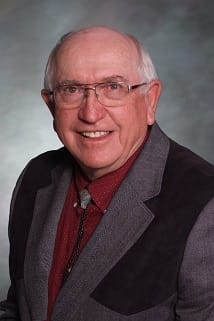 Tass said he didn’t know. But he added: “If we only save one life, to my way of thinking, it is worth that. … This is a horrible procedure and it’s a gruesome way of taking a life, and the time has come to protect the unborn children.”

He then proceeded to once again describe his proposal as “a gift to women and their babies,” as had did last year.

“It’s not a gift, it’s a restriction,” Pelkey said.

Last year’s bill easily passed the House. But the Senate Labor, Health and Social Services Committee’s chairman, Sen. Charles Scott (R-Casper), decided to not let the panel vote on the bill, killing it near the end of the session.

Concern for the fetus. The woman? Not so much.

Several women who testified against Tass’ bill Tuesday said that it seems only concerned with the health and safety of fetuses, and not the women carrying them.

It’s as though women were merely incubators.

Unwittingly, Rep. Scott Clem (R-Gillette), a co-sponsor of the bill, confirmed their belief. He said while there is a provision for the protection of the mother, “Really, the protection here is for the child.”

Clem said when the Supreme Court made its landmark Roe v. Wade decision in 1973, “The science was not as developed as it is today. We know that in the human life cycle there are different stages of human life. Nevertheless, at every single stage, a person is still a human being.”

Ahem … just for the record, the scientific facts of birth haven’t changed since Roe v. Wade, which does not describe embryos and fetuses as either “unborn children” or human beings. The law says the government cannot intrude on a woman’s decision to have an abortion during the first trimester, or 12 weeks.

HB-197 would punish doctors with a felony conviction if they fail to abide by the waiting period.

“If a doctor is going to violate the law, there should be a penalty,” he said.

Sheila Bush, director of the Wyoming Medical Society, said while the organization takes no position on abortion-related bills, its members don’t take kindly to measures that criminalize legal medical practices.

That was also the message of Dr. Rene Hinkle, a Cheyenne OB/GYN, who said physicians have a responsibility to place the life of the mother first.

The bill is unclear in its definition of when a doctor might forego the waiting period and perform an abortion during the initial visit. The threat of 10 years in prison forces the doctor to sideline the mother’s best interests in such situations, so they can make sure they’re not breaking the law.

“It’s a pretty dramatic question to have to answer,” Hinkle said.

This is besides the fact that a 48-hour waiting period, Hinkle said, is “medically unnecessary,” as well as a burden for women who must travel long distances to Jackson to see the only two abortion providers in the state.

The issue that divides us most

A string of women took time out of their days to show up and testify against the waiting period bill.

Wendy Volk of Cheyenne announced herself as a Republican and said the right to an abortion is an aspect of women’s autonomy.

“I have the existing constitutional right to abortion access,” Volk said. “Wyoming is trying to roll back this right … [it] is meaningless if restrictions allow the state to dismantle access to abortion.”

“A woman never walks into an abortion clinic thinking, ‘Well, I don’t know, what do you think?”

Lindsey Hanlon, secretary of the Laramie County Democratic Party, said legislators should give women credit for being able to make their own medical decisions.

“A woman never walks into a doctor’s office thinking, ‘Well, I don’t know, what do you think?’ … Trust a woman to know her own life and her own body,” Hanlon said.

“The only things these [anti-abortion] debates and bills have done successfully is to divide us,” said Marci Kindred of Cheyenne. “It has only given each side its villains.”

Kindred said she, like the bill’s sponsors, also wants to see fewer abortions. But she predicted HB-197 would not get that job done.

Instead, Kindred said she would like to see legislation that makes access to healthcare more affordable, support underprivileged mothers and families, and comprehensive sexual education.

But such things were beyond the House Judiciary Committee’s reach. It stamped the waiting period bill with its approval moved on.

Wyoming doesn’t have late-term abortions, but a bill to govern them advances...
Scroll to top
Share this ArticleLike this article? Email it to a friend!
Email sent!