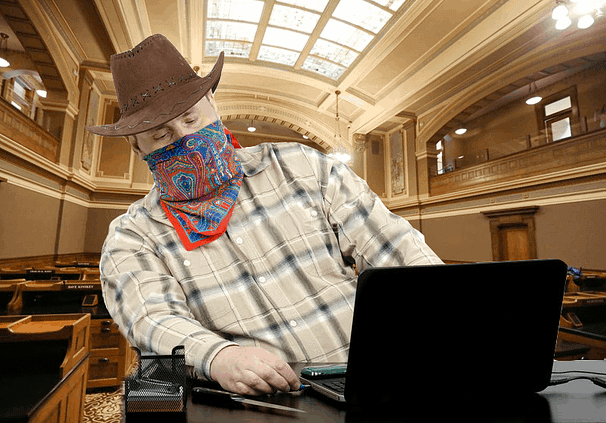 As the COVID-19 pandemic cripples Wyoming’s economy and oil prices plunge along with state revenues, the Wyoming Legislature heads into an unprecedented two-day “virtual” special session beginning tomorrow, May 15 – 16.

Several more “mini-sessions” are likely ahead during the summer.

Wyoming’s government historically has a shoddy record when it comes to transparency. During the special session, it will be even less transparent. Decisions affecting hundreds of millions of dollars and the state’s future will take place largely without public participation, input, or oversight.

Meanwhile, the Legislature will depend on Zoom and other virtual tools to conduct the session, even though its technological infrastructure is understaffed, underfunded, and glitchy during the best of times.

In order to pass emergency legislation to begin to dole out $1.25 billion in federal COVID-19 relief funds, Wyoming lawmakers will suspend their normal rules for the special session. This will allow them to push through three separate votes on each bill in the course of a single day—a process that would typically take upwards of a week.

For a legislature that’s prone to doing things like pass anti-abortion measures while they’re supposed to working on the state budget, it’s not out of the realm of possibility that lawmakers will try to take advantage of the special session for their own agendas.

If all this seems to you like a potential recipe for disaster—or at least hijinks and buffoonery—you’re far from alone.

Advocates for transparency and public participation are worried that, due to the rapid pace of the session and the move to online proceedings, the public may largely be shut out.

And they will be, at least as far as attending the session in person. No members of the public will be allowed to enter the capitol. 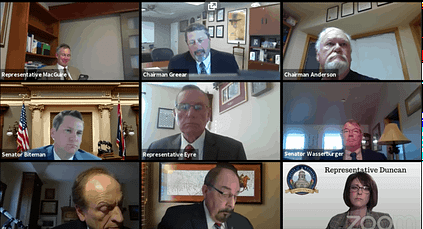 Wyoming lawmakers during a ZOOM meeting earlier this spring.

Initially, the proceedings were going to be off limits to the media, too. But the Wyoming Press Association and several news organizations protested that restriction, so a limited press corps will be able to cover the session.

Reporters will be able to work out of the media room or committee meeting rooms, which means they’ll still be isolated from the action. But they will have access to some legislators at live news conferences—as long as they stay at least six feet away.

The Legislature’s Management Council has conducted online meetings over the past few weeks to hash out the bills they will consider during the special session.

“The process will favor well-placed lobbyists with existing leverage, relationships, and access. That might be difficult for regular folks. It definitely makes this very ‘inner circle.’”

If these meetings are any indication, members of the public are going to have a tough time having their voices heard moving forward.

At the Legislative Management Council’s April 16 meeting, the public wasn’t involved at all. Two draft bills weren’t available on the legislature’s website until the morning of the meeting, and they were immediately outdated when legislative staff sent revised versions only to lawmakers via email.

No public comments were taken.

House Speaker Steve Harshman (R-Casper) said during that meeting that anyone wishing to speak at future meetings must sign up in advance. Two people did so April 24, but they chose not to testify because they did not have access to all the materials.

At the May 1 meeting, a few lobbyists testified on three draft bills, but there were no members of the general public—likely because they weren’t familiar with the sign-up process.

Marguerite Herman, of the Wyoming League of Women Voters, said that during the virtual session, lawmaking will become even more of an insider’s game than usual.

The online process, she said, “would favor the well-placed lobbyists with existing leverage and relationships, and also access to the writing and working of bills by the Management Council. That might be difficult for regular folks. It definitely makes this very ‘inner circle.’”

The Wyoming Legislature has neglected to invest in a modern-day technology staff and infrastructure. This isn’t a huge deal during normal times, but it presents challenges in the COVID-19 era.

“He’s just a detached head floating around on his screen.”

At one recent Management Council meeting, a technological foible nearly spoiled a vote.

An amendment on a bill related to legislator pay initially failed, with a 6 – 6 tie. Amendments must pass with a clear majority.

But the vote was taken by a show of hands on lawmakers’ screens, and it turned out that one lawmaker, Rep. John Freeman (D-Green River), had simply leaned too far back into his green screen background for his hand—or his body—to be visible.

Sen. Chris Rothfuss (D-Laramie), who brought the amendment, noticed that Freeman was “just a detached head floating around” on his screen, and asked for a recount. The amendment passed with Freeman’s vote.

It was a funny moment—but it will be far less amusing with 60 state representatives trying to be counted on votes that are far more consequential.

Ryan Frost, the Legislative Service Office’s public information officer, stressed that technological logistics for a remote special session are still being ironed out.

“LSO has a pretty modest IT staff. To use an expression the governor has used, ‘We’re building the plane as we’re flying.’”

“To use an expression the governor has used, ‘We’re building the plane as we’re flying,’” Frost said. He noted an LSO website form allows people to submit comments to lawmakers.

Depending upon what social distancing measures are in place, Frost said a possible second special session this summer might also be a “hybrid,” with some legislators at the capitol and others online.

Chris Merrill, executive director of the Equality State Policy Center, told Better Wyoming it would be smart for the legislature to hire a professional videoconferencing facilitator for the special session.

This would “make sure these meetings operate in a fashion that is as close to possible as the traditional approach to the deliberative process,” Merrill said.

But with tight-fisted Wyoming lawmakers facing a budget crisis, that doesn’t appear to be happening.

“LSO has a pretty modest IT staff,” Frost acknowledged. “But at this time, I haven’t heard anything about consultants. It will be done in-house.”

“Even if they’re livestreamed, that’s not enough to involve a lot of the public,” he said. “The only option for a lot of people for anything approximating broadband is satellite, and if they do that, they have to pay for the amount of data they use.”

Given this situation, average Wyomingites will, for the most part, have to wait and see how the legislature handles this situation.

As if life during COVID wasn’t stressful enough.

COVID-19 prompts Wyoming lawmakers to reconsider Medicaid expansion
Scroll to top
Share this ArticleLike this article? Email it to a friend!
Email sent!