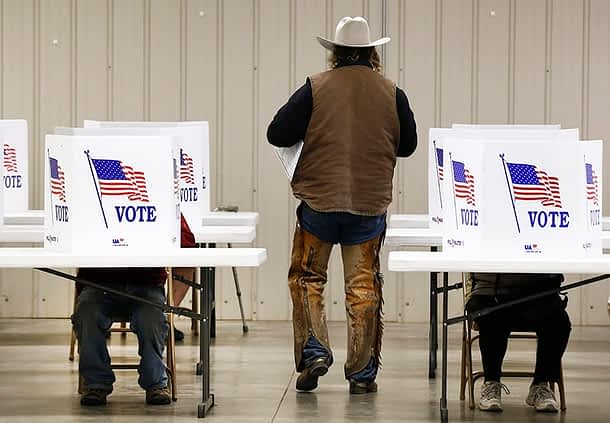 Wyoming's voter registration laws focus solely on registering at the polls. But this one-trick pony doesn't ride too well when almost half the electorate is voting absentee.

Tens of thousands of registered Wyoming voters received applications this summer to request their general and primary ballots in the mail. According to Kai Schon, director of the Wyoming Secretary of State’s Elections Division, roughly 38 percent of the state’s primary voters returned these ballots via the U.S. Postal Service, and even more delivered them by hand to county clerks’ offices or secure dropoff boxes.

Despite this success, countless more potential Wyoming voters were left out.

That’s because our state has aggressive laws to “purge” people from its voter database who missed the last election, making them ineligible to vote until they re-register.

That means they didn’t receive anything about absentee voting from the Secretary of State.

In normal election years, this would be less of a problem. People who had been “purged” could simply take advantage of Wyoming’s law that allows residents to register to vote at the polls when they go to cast their ballot.

But 2020 is anything but normal, in part because a huge portion of our electorate is avoiding the polls altogether. And it turns out that, because Wyoming lacks registration options that are common in other states, registering to vote at the polls here might be easy—but registering to vote any other way is a pain in the ass.

Wyoming, like every state, has a voter database to track who is and isn’t eligible to vote. The federal Help America Vote Act of 2002 requires each state to maintain such a database, and states regularly remove people who have moved, died, or become—for whatever reason—ineligible to vote.

Whatever their reason for missing the 2018 general election, disenrolling nearly a quarter of Wyoming’s voters is a dramatic response.

But unlike many other states, Wyoming has aggressive vote purging laws that disenroll voters who miss a single general election.

These laws have real consequences when it comes to who votes in Wyoming. According to data from the Secretary of State’s office, Wyoming removed 66,301 people from its voter rolls in the first three months of 2019——more than 23 percent of the state’s total registered voters.

Whatever their reason for missing the 2018 general election, disenrolling nearly a quarter of Wyoming’s voters is a dramatic response.

Lenhart argues that “bringing Wyoming law in line with the other states in the region would impose minimal burdens and would result in an increased opportunity for citizen participation in the election process.”

This has never been more true than in times of COVID, when more and more Wyoming voters need to stay registered so they can vote absentee.

In most other states, registering to vote outside the polls is easy. You just go online and sign up with your driver’s license or other state ID.

It’s as though most of the world has, you know, joined the 21st century.

Wyoming is one of the handful of laggard states that haven’t adopted online registration and need to get with the program.

Forty states—including Idaho, Utah, Colorado, and Nebraska—register their residents to vote on the Internet. Online voter registration provides an easy, socially distanced way to register if you’ve never voted before, or if you have been “purged.”

Wyoming is one of what University of Wisconsin Law Professor Daniel Tokaji refers to as “the handful of laggard states that haven’t yet adopted online registration” and that need to “get with the program.”

Laramie County Clerk Debra Lee, who supervises elections in Wyoming’s largest county, supports online voter registration. In addition to making it easier to register, she said, it also helps her office keep its files up to date.

“It’s working for these other states, and I think it’s time for Wyoming to take a serious look at it,” Lee told Better Wyoming. “It could minimize our data entry errors, because with same-day registration we get in a large volume of paperwork that we have to hand enter under a tight timeline.”

Lee said voters could also go online and update their own information, such as when they move.

In 2018, 45 percent of all voter registrations in the United States came through motor vehicle offices. But not in Wyoming.

Wyoming chose not to participate in the “Motor Voter” program when it began in the early 1990s. Instead, the state passed its law to allow people to register to vote at the polls.

Margy White, who was deputy secretary of state at the time under Kathy Karpan, told Better Wyoming it was because “Motor Voter” would have resulted in too many people registering who never actually vote. In turn, because of Wyoming’s aggressive vote purging laws, county clerks would have been tasked with culling massive numbers of people from the voter rolls.

So, instead of avoiding this burden for county clerks by relaxing Wyoming’s voter purge laws, the state went the other way and simply opted out of a program that makes it easier to register to vote.

In Texas, a person can hardly walk across a college campus without having someone try to register them to vote. That’s because, as in most states, Texas allows “third-party” voter registration drives.

You won’t find people registering students to vote at any college campus in Wyoming, however, because Wyoming voter rules prohibit “third-party” voter registration drives. They do this by disallowing organizations from submitting “batches” of voter registration forms that they collect.

Unlike Texas, you won’t find people registering students to vote at college campuses in Wyoming.

In Wyoming, only county clerks have the authority to register people to vote. But they often lack the resources to conduct registration drives, leaving folks to come to them to register in their office or at the polls.

If a Wyoming resident does want to register somewhere else, they must fill out a mail-in registration form in the presence of a “notary public,” have the notary stamp and verify it, make a copy of their driver’s license, and mail the whole package to the county clerk’s office.

If this sounds like a pain, it is—we should know. In order to skirt Wyoming’s prohibitions of third-party registration drives and get folks signed up to vote, a Better Wyoming staff member recently became an official notary and has been setting up shop in a plaza in Laramie with a photocopier helping people register to vote.

We’re not turning in the applications in “batches,” which is prohibited—people put the forms in the mail themselves. This allows us to stay within the confines of the law.

Until Wyoming updates its laws to join the rest of the nation in accepting online registration, stops purging people from the voter rolls for missing a single election, and adopts other reforms—like allowing Better Wyoming to register people to vote!—we’ll have to stay creative.

Wyoming lawmakers’ plan to import drugs from Canada won’t lower prescription...
Scroll to top
Share this ArticleLike this article? Email it to a friend!
Email sent!