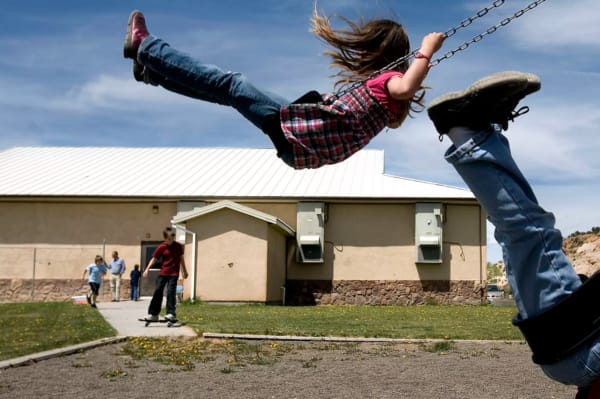 “To drastically cut our school budgets will cripple our children's ability to build the skills they need for our state to compete in the future economy. We will become a backwater, poor state that offers no hope for its people.”

Opponents of increasing Wyoming’s taxes sometimes claim that if people have to pay more of their hard-earned income to the government, they will move out of the state.

Michelle Humber of Pinedale says the opposite is true.

The Georgia native said she and her husband decided to raise their family in Wyoming, where he grew up, because of its excellent educational system. Now, they’re worried that budget cuts will hurt Wyoming public schools and their first- and third-grade daughters’ educations.

“I really worry that with all these cuts, you’re going to have a mass exodus of people going to other places, and you will see people not choose to move here,” Humber said at a recent online meeting of the Wyoming Legislature’s Joint Revenue Committee. “An educated workforce is beneficial for any economy, to get people to stay here.”

While it’s fun to imagine a state in which your favorite fishing hole never sees another angler, the reality is that Wyoming can’t diversify its economy without at least maintaining its already tiny population.

With Wyoming already losing population—and especially young people—it’s probably a good idea to not let our public services and infrastructure go to hell and compel more people to leave.

Staring the crisis in the face … and doing nothing

Wyoming is facing the worst budget crisis in its history. The state—including public education—has long been financed by taxing the mineral industries, which are in steep decline. That disappearing revenue, combined with the devastating financial impact of COVID-19, has led Gov. Mark Gordon to recommend $515 million in budget cuts for the next fiscal year.

In addition, K-12 education faces a $300 million deficit that Gordon said will double in two years if nothing is done. But rather than recommending any tax proposals, the governor is leaving it up to the Legislature to find a solution.

Like Gordon, however, the Wyoming Legislature has taken a long, hard look at our budger crisis and done … well, nothing. That trend continued during the most recent Revenue Committee meeting, late last month.

“To drastically cut our school budgets will cripple our ability to build the skills of our children and the state to compete in the future economy. We will become a backwater, poor state that offers no hope for its people.”

The committee said ‘no’ to sales tax and property tax and alcohol tax increases, as well as an income tax proposal, and it won’t consider removing sales tax exemptions to a wide range of industries and services.

The Revenue panel did vote to sponsor a 9-cent per gallon increase to the state’s tax on gasoline and diesel, which would raise roughly $60 million per year to repair state and local roads. But that’s a drop in the bucket compared to the Wyoming Department of Transportation’s needs of about $350 million per year.

Education is critical for the economy

Ms. Humber, from Pinedale, was far from the only Wyomingite to attend the Revenue Committee’s meeting and voice support for taxes that would help save the state’s school system.

Tyler Cessor, executive director of Art 321 in Casper, said he’s deeply concerned about the impact of the proposed 16 percent cut to public schools.

“The younger generation is worried about what’s going to be here for themselves and for their children,” Cessor said. “Without some reasonable revenue measures, it’s going to be increasingly bleak.”

He added, “Cuts aren’t going to get us out of this. I, too, am willing to put in some extra money for the services that we receive.”

“The younger generation is worried about what’s going to be here for themselves and for their children.”

Phyllis Roseberry, who lives near Worland, told the committee she would be happy to pay more in taxes to keep Wyoming’s quality of education high. Without good schools, she said, its chances of economic growth are nil.

“If we value our children, we will have to look for more sustainable revenue sources,” Roseberry said. “To drastically cut our school budgets will absolutely cripple our ability to build the skills of our children and the state to compete in the future economy. We will become a backwater, poor state that offers no hope for its people.”

Support for an income tax

Along with average residents taking their free time to attend the committee meeting, some lawmakers and lobbyists voiced support for increasing revenue, as well.

Revenue Committee Co-Chairman Dan Zwonitzer (R-Cheyenne) pointed out that a proposal to establish an income tax for ultra-wealthy people in Wyoming could raise about $200 million a year.

“We can vote ‘no’ on everything, but what is the end game for the state and this Revenue Committee? I believe we have to do something, and so far we’ve hardly done anything.”

This wouldn’t solve the state’s budget problems, he said, but it would take a big chunk out of the problem.

“I don’t want those cuts of $500 million to [state] government,” Zwonitzer said. “For the benefit of all our communities we’ve got to do something to get some revenue on the table.”

The proposed income tax would have only affected about 2,000 taxpayers whose annual income is more than $500,000. Department of Revenue Director Dan Noble said that most of revenue generated by the tax would come from just 880 Wyoming residents who make more than $1 million a year—more than most of us will see in our lifetime.

Three Republicans, two Democrats and an independent voted to sponsor the measure. But eight conservative legislators voted ‘no,’ killing the bill.

“Where are we going as a state?” asked Rep. Jim Roscoe (I-Wilson) afterwards. “We can vote ‘no’ on everything, but what is the end game for the state and this Revenue Committee? I believe we have to do something, and so far we’ve hardly done anything.”

Currently, Merrill said, Wyoming residents making less than $25,000 per year pay 9.6 percent of their income on state and local taxes, mostly in the form of sales tax. The top 1 percent of wage earners, meanwhile, pay only 2.6 percent of what they make.

A flat income tax would help even these figures out. And, thanks to Wyoming’s constitution, if an income tax is ever adopted, residents will receive credit for the sales and property taxes they’ve paid. That means any income tax would, in effect, be a progressive income tax, impacting wealthier people more than it does poor folks.

Healthcare access grows harder for thousands of newly uninsured Wyomingites
Scroll to top
Share this ArticleLike this article? Email it to a friend!
Email sent!