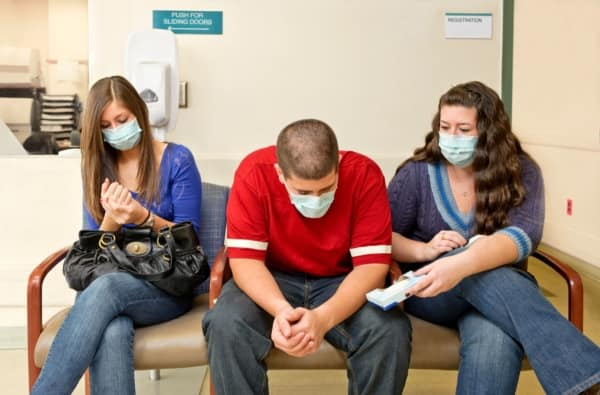 Today, one in six Wyoming adults don't have health insurance.

Wyoming lawmakers who have the best healthcare money can buy continue to deny insurance to the state’s most vulnerable residents, even during a pandemic.

That’s been the case for the past seven years, as the Legislature has rejected federal funding to help low-income workers get health insurance via expanded Medicaid. More recently, these lawmakers have gutted the Wyoming Department of Health’s budget, which mostly funds health clinics and services around the state.

The COVID-19 pandemic highlights the gulf between the people who make the decisions about healthcare access in Wyoming and those who have to live with the consequences.

In late November, Gov. Mark Gordon and his wife Jennie were diagnosed with the coronavirus. Even without his state-provided health insurance, the governor never had to worry about how he might pay for his care. The couple was rich enough to donate nearly $2 million to Gordon’s 2018 campaign.

Shortly before Gordon’s diagnosis, Wyoming Senate President Drew Perkins (R-Casper) was hospitalized by COVID-19. Wyoming legislators do not receive health insurance from the state, but Perkins is a high-profile attorney with top-notch private insurance. Like most of his colleagues, Perkins is rich enough to essentially volunteer for Wyoming’s “citizen Legislature,” and he’s likewise not concerned by pesky healthcare bills.

On the other end of the economic spectrum from Gordon and Perkins, nearly 30,000 Wyomingites do not have any health insurance, and that number is increasing. According to a recent study, thousands of Wyomingites have become newly uninsured as a result of job losses during the pandemic.

For these folks, even a brief stay at a hospital can be financially devastating, not to mention a prolonged illness. And as Wyoming’s struggling economy and budget crisis get worse, the decisions by wealthy lawmakers to block low-income people from health insurance will have far-reaching consequences.

According to a new report by Families USA, a healthcare consumer advocacy group, roughly 6,000 people in Wyoming have become uninsured this year as a result of job losses. Today, more than one in six adults in Wyoming don’t have health insurance.

These are people who can’t afford to see a doctor when they’re sick, much less get preventative care via regular checkups. When they finally decide they’re so sick they must seek treatment, they commonly rely on emergency rooms, where hospitals can’t turn them away. The hospitals eat part of the costs of treatment and pass the rest on to everyone else via higher medical fees.

Who are these uninsured folks? Mostly, they’re low-wage workers whose jobs don’t provide health insurance. The majority are women.

According to the Families USA study, hotel maids, restaurant servers, bartenders, grocery store clerks, construction workers, truck drivers, and fast-food employees are some of the main types of workers in Wyoming who don’t have insurance.

Tens of thousands of working people in Wyoming can’t get health insurance through their jobs, and by refusing to expand Medicaid, the Legislature is blocking their best alternative.

The vast majority of these low-wage workers would have health insurance if the Wyoming Legislature agreed to accept federal funds via expanding Medicaid. According to the Families USA report, 70 percent of people in Wyoming who would receive health insurance under expanded Medicaid are working now or have worked in the past 12 months—many piecing together two or three low-paying jobs.

Legislators opposed to Medicaid expansion typically like to characterize those who would benefit as “free-loaders.” Lobbyists like the Wyoming Liberty Group’s Cassie Craven like to sneer that residents who would become insured under Medicaid expansion are “able-bodied” and nevertheless would get “free healthcare from Wyoming.”

But the reality is that tens of thousands of working people in Wyoming can’t get health insurance through their jobs, and by refusing to expand Medicaid, the Legislature is blocking their best alternative.

No insurance, no state health funding

While it refuses hundreds of millions of federal dollars to expand Medicaid, Wyoming has accepted federal funds to deal with some aspects of the COVID-19 crisis. Governor Gordon has directed federal CARES Act dollars to provide temporary financial support for hospitals, to address healthcare staffing shortages, and to help folks sign up for health insurance via the federal Healthcare Marketplace.

All of these are short-term solutions, unlike expanding Medicaid, which provides states with continuous funding for healthcare.

At the same time, Gordon has proposed hundreds of millions of dollars in cuts to the Wyoming Department of Health. Most of that agency’s budget is distributed across the state to health clinics and programs, typically which serve low-income residents.

The cuts are a response to plummeting revenues from the struggling fossil fuel industries and the Legislature’s refusal to replace them.

As the state’s uninsured population grows, and programs to help low-income people receive healthcare disappear, even more people will rely on Wyoming hospital emergency rooms for care. But the federal emergency CARES Act funding for hospitals will not last forever, and it’s unclear which facilities in Wyoming will be able to withstand the costs of treating more uninsured people during an economic bust and a state budget crisis.

After the Legislature’s most recent decision to refuse federal funds for Medicaid expansion, during the 2020 budget session, Speaker of the House Steve Harshman (R-Casper) seemed to have a bit of an epiphany.

Harshman, a high school teacher, has traditionally opposed Medicaid expansion along with his colleagues. But he realized that refusing federal funds for healthcare doesn’t, in the long run, amount to financial savings. It just blocks a certain group of people from healthcare access.

“We take care of poor people, poor kids, people with disabilities,” Harshman said. “But this is an expansion to able-bodied, childless adults. We may very well have a lot of unemployed, able-bodied, childless adults. We’re going to pay one way or another. Either they’re going to go to your emergency room and Wyoming Medical Center or somebody else.”

As a result of the COVID-19 pandemic, Wyoming has more and more working people whose treatment we’re going to pay for, one way or the other. Whether or not Harshman’s wealthier colleagues can grasp this reality might depend on how bad the problem gets, and whether they can look past their own easy healthcare access and see the suffering of others across the state.