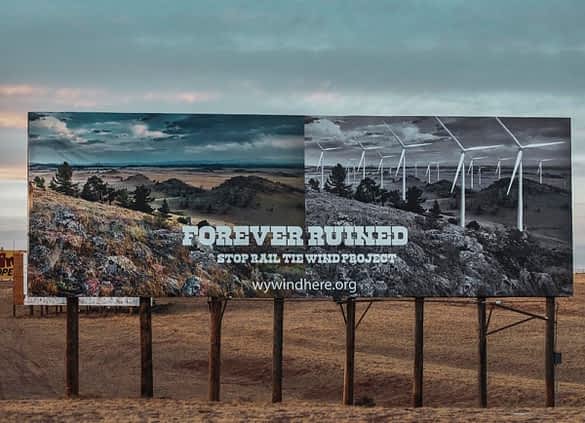 Nearby landowners have purchased several billboards as part of their campaign to stop the Rail Tie wind project.

Wyoming workers and communities that depend on the fossil fuel industries can feel wary about renewable energy development.

After all, the sight of wind turbines on the horizon reminds people that lucrative jobs in the oilfield and coal mines are going away, and that Wyoming politicians have been powerless to save them.

Of course, clean power development in Wyoming, just like anywhere else, is a response to market forces driving down the cost of carbon-free energy, alongside global efforts to stop climate change.

But for a small group of wealthy landowners in Albany County, anxieties in Wyoming about the transition to carbon-free energy provide something else: an opportunity. Leveraging rumors, misinformation, and Wyomingites’ suspicions about renewable energy, they have launched a campaign to block a proposed wind farm from being built near their hilltop backyards.

Alongside Wyoming lawmakers’ efforts to prop up the fossil fuel industries and discourage clean power development, this anti-wind landowners’ group is a new faction in the fight to keep Wyoming stuck in the past and clinging to outdated energy.

And so far, the anti-wind group is winning.

Wind farms can be a “godsends” for struggling counties

The proposed Rail Tie Wind Project would situate turbines across 26,000 acres of private and state land in southern Albany County and northern Colorado. In Wyoming, 80 percent of the project would go on private land, and 20 percent on Wyoming School Trust Land.

For Albany County, the poorest in Wyoming, the project’s tax and private sector impacts would be immense. Project developers estimate that sales tax alone during the construction phase would generate $14.6 million for the county over a two-year period.

In comparison, Albany County received a grand total of less than $21 million in sales tax revenue during the entire 2020 fiscal year.

Directly to the east, Laramie County can already testify to the tremendous boon of wind farm construction during these otherwise dismal economic times.

Laramie County officials feared budget cuts up to 25 percent due to COVID-19’s impact on oil and gas. Instead, thanks to the Roundhouse wind farm, sales tax increased a whopping 20 percent

Cheyenne City Treasurer Robin Lockman told Better Wyoming that the development of the Roundhouse Wind Farm there was a “godsend” during COVID-19. Cheyenne city officials feared losing up to 25 percent of their entire budget at the start of the pandemic, owing to its negative impact on the oil and gas industry.

Instead, thanks to the construction of the Roundhouse wind farm, the city saw a whopping 20 percent increase in tax revenue over the previous year.

Proportionately, the sales tax impact of the Rail Tie project’s construction in less-populous Albany County would be even more dramatic. And this would be in addition to an estimated 500 new jobs during construction, plus a steady $3.3 million in annual county tax payments and 20 permanent jobs during normal operations.

The anti-wind group’s plan to stop the wind farm has two steps. First, the group aims to convince the Wyoming Office of State Land and Investments Board (SLIB) to block the 20 percent of the project slated to go on state school trust land.

This would scuttle a proposed land lease agreement between the state lands agency and the wind farm developer that would generate $20 million for Wyoming schools—in addition to sales tax revenue—at a time when Wyoming public education is facing massive budget cuts.

After the SLIB board, the anti-wind group hopes to convince the Albany County Commission to change its current wind farm regulations to stymie the remaining 80 percent of the project planned for private land.

For months, the anti-wind group has spent tens of thousands of dollars on online promotions, billboards, and a glossy mailer sent to every resident of Albany County. They claim that the Rail Tie project would somehow ruin tourism, despoil night skies, create safety risks, and threaten (their backyard) viewsheds.

Along with their public campaign, the group supplements its promotions with political clout, most notably in the form of their attorney Phil Nicholas, a former Wyoming State Senate President.

In November, Nicholas convinced the Wyoming SLIB board—which consists of Gov. Mark Gordon and the state’s other “top-five electeds”—to initially reject a proposal for the portion of the Rail Tie project slated to be built on school trust land, dealing the project an unexpected setback.

After objections from the developer, however, the SLIB board has agreed to gather more information and reconsider the proposal at its regular meeting on Jan. 21.

Meanwhile, the Albany County Commission will consider changes to its wind regulations at a meeting in early March.

Critics of wind energy point out that while wind farms bring huge amounts of tax revenue during the construction phase, the revenue—and job creation—peters off during normal production.

This is true, to an extent. But it’s notable that no other new industry faces this type of scrutiny in Wyoming.

In fact, much of what counts for “economic diversification” in Wyoming involves the state forking over huge sums of public money to private businesses to locate here, or state lawmakers bending over backwards to pass industry-favorable policies, regardless of the payoff.

For instance, Weatherby Arms’ much-lauded relocation to Sheridan involved a $12.6 million grant package for the company from county and state business agencies. Similarly, the decision by global company Underwriters Laboratories to locate in Laramie involved city and county agencies offering the company a brand new building.

Much of what counts for “economic diversification” in Wyoming involves forking over huge sums of public money to private businesses, or lawmakers bending over backwards to pass industry-favorable policies.

Meanwhile, the Wyoming Legislature has worked for years to create a business environment favorable to cryptocurrencies and blockchain. But the result has been essentially a giveaway to industry that has not amounted to either jobs or revenue for Wyoming.

In contrast, wind energy appears to be one of the only industries willing to do business in Wyoming without a handout, even while lawmakers have created a uniquely burdensome tax structure and atmosphere of uncertainty.

“If you like wind, you’re cheating on your wife”

Unease toward carbon-free energy in Wyoming is understandable. The state has been wedded to the fossil fuel industries for so long, as one Carbon County commissioner put it, supporting wind energy can feel like “you’re cheating on your wife, you’re cheating on oil, gas and coal.”

But Carbon County, like Laramie County, has accepted that wind energy will be a critical part of Wyoming’s diversified economy as we move away from fossil fuel dependence, and they’re currently benefitting from wind projects.

On the other hand, efforts by the anti-wind landowner group in Albany County contribute to Wyoming’s difficulties moving into the future, diversifying our economy, and weaning ourselves off fossil fuel dependence.

A user’s guide to the bizarre, online 2021 Wyoming legislative session
Scroll to top
Share this ArticleLike this article? Email it to a friend!
Email sent!