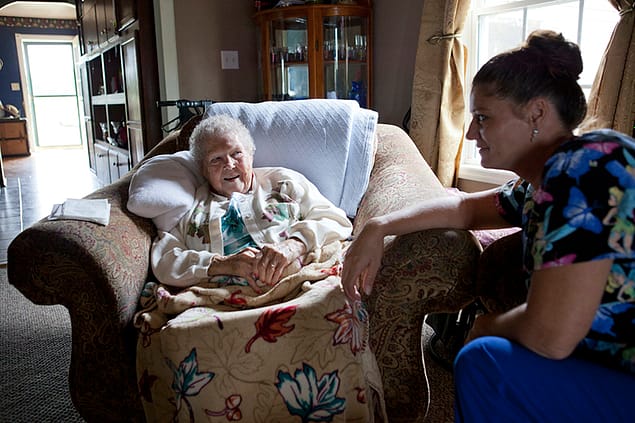 Cuts to in-home elder care programs will eliminate jobs and force old folks out of their homes.

From young to old, proposed budget cuts to the Wyoming Department of Health will hurt people of all ages, all across the state.

The state budget proposed by Governor Mark Gordon, which the Legislature will begin debating early next month, contains $135 million in cuts to Wyoming’s health department, or about 14 percent of its budget.

The proposed cuts would reduce or eliminate services for at-risk teenagers, developmentally disabled adults, folks who need mental health and substance abuse treatment, and elderly people who rely on at-home care, among others.

Ninety percent of the Department of Health’s budget “passes through” the agency, funding health programs and facilities throughout Wyoming. So these cuts will harm healthcare services in virtually all of our communities. They will also result in the elimination of hundreds of healthcare jobs.

All of this is the result of the Legislature’s refusal to raise taxes to replace lost revenues from the struggling fossil fuel industries, as well as its refusal to secure federal funds by updating its Medicaid program to cover people who cannot afford insurance.

The rejection of federal Medicaid funding has cost Wyoming more than a billion dollars to date.

An end to independent living

The Wyoming Department of Health budget has already experienced significant cuts in recent years, including a $100 million reduction in 2016. Whatever “fat” needed to be “trimmed” from the agency is long gone.

What remains are cuts that remove critical resources from Wyoming’s most vulnerable residents and degrade health services in communities statewide, particularly in rural areas.

Some will end up in nursing homes, while others will make do living with family members who lack the resources to provide proper care.

For instance, the governor’s proposed budget would cut $2.7 million from Wyoming Home Services, which supports in-home services for elderly and developmentally disabled adults.

The program helps people with tasks that are necessary for independent living—bathing, dressing, medication management, etc.—and allows them to remain at their homes instead of moving into expensive facilities.

Herb Wilcox, executive director of Wyoming Senior Services, Inc., in Riverton, said the loss of in-home services will ultimately prevent many people from living on their own.

Some will end up in nursing homes, he said, while others will have to make do living with family members who lack the resources to provide proper care.

“There’s a lot of things that domino effect if we lose that program,” Wilcox said.

Because the cost of the home services program goes almost entirely to caregivers’ salaries, these cuts would eliminate or reduce the hours of roughly 120 healthcare jobs statewide, according to Department of Health estimates.

People suffering from mental illness who come in contact with law enforcement are often housed in jail for months, when where they need to be is in a treatment center.

Wyoming’s shortage of in-patient mental health treatment centers is well known. As former Albany County Sheriff Dave O’Malley pointed out in a letter last fall, people suffering from mental illness who come in contact with law enforcement are often housed in county jails for months, when where they need to be is in a treatment center.

Last year 962 substance abuse patients were treated at residential centers in Wyoming. The reduced number of beds, according to DOH, puts patients “at risk of an alcohol or drug dependency relapse.”

But as usual, our state lawmakers are slow to learn and quick to forget.

Speaking of budget cuts that will end up costing the state more in the long run, the governor’s proposed reductions for the Department of Health include entirely axing a mental health program for at-risk teens.

The High Fidelity Wraparound program provides community-based treatment for youth with complex behavioral issues. Its staff coordinates between different aspects of caregiving—social workers, teachers, doctors, etc.—to ensure kids can receive the support they need while staying at home with their families, rather than being sent to the state hospital or given up for foster care.

“I know they have to recoup funds from somewhere, but this is not a program you want to cut. It is exponentially cheaper than a psychiatric residential treatment facility or foster care.”

Eliminating the statewide program for at-risk would save the state $5.8 million in the short term. But every child that’s sent to a residential facility will cost the state $58,000, rather than the $15,000 it currently costs to support wraparound services.

Kyla Maestas, a Rock Springs wraparound provider, said she understands the state’s budget situation, but cautioned that cutting this program entirely would be unwise.

“I know they have to recoup funds from somewhere, but this is not a program you want to cut,” Maestas said. “It is exponentially cheaper than a psychiatric residential treatment facility or foster care.”

In addition to funding mental health and substance abuse programs, elder care, developmental preschools, the state hospital, and a handful of other individual programs, the Department of Health’s budget supplies funding to health clinics via the state’s Medicaid program.

That is the final, most broad-ranging target for proposed cuts.

The Wyoming Legislature continues to use an outdated version of Medicaid, in which the state and federal government split costs 50/50. Under this older version, only Wyoming residents with severe needs, such as physical or mental disabilities, qualify for coverage.

Most states have extended Medicaid coverage to people who simply can’t afford health insurance. These states only pay 10 percent of the costs, while the federal government covers the other 90 percent.

Instead of updating Wyoming’s Medicaid program and receiving hundreds of millions of dollars in federal funds, the proposed budget would cut more than $20 million from the current program by lowering the rate at which the state compensates physicians and health centers that treat Medicaid patients.

The Wyoming Legislature would do well to instead reject these cuts, raise new revenues to fund healthcare, and update its Medicaid program by extending it to people who can’t afford insurance.